Line Dancing Content from the guide to life, the universe and everything 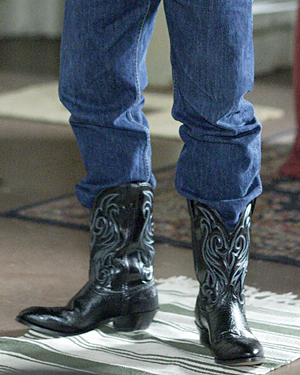 Despite its associations with cowboy hats and cowboy boots, line dancing originally had little to do with the 'Country and Western' scene. It certainly doesn't date back to the days of the cowboys. Line dancing first started in the USA, some time in the late 1970s to early 1980s. Early line dances were performed to disco music, as much as to country and western, and line dancers would dance to whatever was played. Few of the dances even had their origins in country dancing. The 'Cowboy Charleston', as its name suggests, was based on the Charleston, and 'The Barn Dance Mixer' had its origins in Paso Doble. The 'Tush Push', one of the most popular and best known line dances, was originally written to be performed to 'big band' sounds.

The links with country and western were forged with Billy Ray Cyrus's 'Achy Breaky Heart'. The dance to this song was written as a marketing ploy to sell the single, but line dancing to country music soon became a big dance craze.

Today, 'purists' will only line dance to country music, ignoring the previous history of line dancing. Others will dance to any tune, as long as someone will tell them the steps. It doesn't matter whether it's reggae, jazz or the latest chart sounds. You name it, if there's a dance that will fit they'll do it. Even if it's only the good old 'Tush Push' - and there's a Status Quo track that that'll fit to!

Line dancing continues to be popular, particularly because it's one of the few dance forms where you don't need a partner, and because it's easy to learn. Hardly a week goes by without a new dance being added to the list.

What Is Line Dancing?

Line dancing is performed by a number of people all facing in the same direction and moving in lines. Everybody in the line does the same steps. A line dance consists of a sequence of steps repeated several times to a particular piece of music. Line dances are defined by three things: level of difficulty, walls and count.

It's a widely recognised fact that exercise is good for you. It can increase your lifespan and it makes you feel good. Line dancing has the advantage of being a very social form of exercise, so you can meet people and make new friends while exercising. It's also a lot of fun.

The best way to learn how to line dance is to find a class. Some venues have callers, so you may be able to pick it up as you go along. Here are some of the basic steps, so that you'll know what they're talking about.

Some websites have glossaries of steps, so a web search may help you to find more information.

New line dances are thought up every day. However, some venues like to play tunes that you can dance the 'old favourites' to. These dances include the 'Tush Push', the 'Electric Slide' and the 'Boot Scootin' Boogie'. Steps for these and many other dances can be found on a lot of line dance websites.

You do not need jeans, a checked shirt, cowboy boots, Stetson and a neckerchief. If you wish to wear these for line dancing that's your choice. They are not compulsory. The only criteria for line dance clothes is that they should be comfortable and cool - that's temperature, not style. You can get quite hot while line dancing. Footwear should be comfortable and should fit well.

Do not wear trainers; they grip the floor too well and your feet need to be able to slide a little. Do not wear high heels or stilettos (that includes the men!); some steps are awkward, if not dangerous, in high heels. Shoes like these can also damage the wooden floor you're dancing on, which is frowned upon. Some kinds of sandals and beach footwear are also unsuitable; they allow your feet to move in the shoe, instead of moving with your feet. Some sandals can also be 'grippy'.

Most of the following tips apply to any kind of dancing, but it's worth mentioning them:

Use your favourite search engine to find some links. There are way too many to try to list them here.

Try a websearch to find a selection of books. There may also be line dance videos, which should also be available from a good record shop. Have a browse and, if you find one you like, buy it. Bear in mind, though, that line dancing is ever-changing. A book or video will give you the steps to some line dances, but new ones come along all the time and the book or video will soon be out of date. Find a website with a good dance database that is updated regularly and make regular visits. There are also magazines that print line dance 'scripts'.

Check out the line dance magazines for classes or line dance venues near you. If they don't list any, you could always write in and ask for help or put in a small ad.

If line dancing hasn't reached your area yet... You could always hire a local hall and start up your own group. One of you will have to be responsible for finding and teaching the dances, but everybody's got to start somewhere.

As far as music goes, either get hold of CDs with the music for your favourite dances, or browse around to see if your favourite music has been choreographed. A few websites allow you to do searches based on the title of a piece of music. New CDs of line dance music are coming out all the time.

Line dancing can be vigorous. Take it easy at first if you are overweight or unfit.