Bloomers - How Women Sought Freedom and Found Knickers Content from the guide to life, the universe and everything 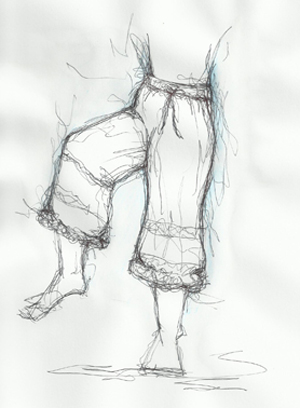 If you thought that there was little of interest in the story of a humble item of clothing, such as bloomers, you would be wrong. This is a story that involves Victorian dress, bicycles and the emancipation of women.

In the middle of the 19th Century, Britain was prospering. Affluent businessmen moved their families from the cities into fine new houses in fashionable suburbs. A man's social status was expressed by the number of servants he employed, and, if he was rich enough, his wife was not expected to do any work at all. Men wanted their wives to possess all the domestic virtues: to be gentle and patient, charming but chaste. The clothes that reflected these attitudes were extremely restrictive.

As skirts expanded, they needed the support of a large number of petticoats. The weight of these became intolerable and, in 1856, they were replaced by a 'cage crinoline', or hooped petticoat. This consisted of flexible steel hoops, which could either be sewn into a petticoat, or form a separate garment, hung by tapes from the waist. Legs were supposed to be invisible, but if a crinoline tipped up, there was a danger that onlookers could catch a peek of forbidden flesh. So, it was usual to wear linen pantaloons, often edged with lace and reaching down to the ankles. By the end of the decade, crinoline skirts were so huge, it was impossible for two women to enter a room together, or sit on the same sofa. The frills of one dress took up all the available space.

The Introduction of Bloomers 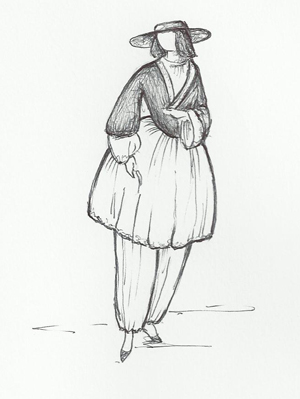 Such extreme fashions were not without their critics. Among these was Mrs Amelia Bloomer, who arrived in Britain from America in 1851. She was an advocate of women's rights, arguing that women should be able to express themselves in ways other than home and fashion. She wrote 'The costume of women should be suited to her wants and necessities. It should conduce at once to her health, comfort and usefulness; and, while it should not fail also to conduce to her personal adornment, it should make that end of secondary importance.' The costume that she advocated seems very modest to our eyes. It consisted of a simplified version of the fashionable bodice, and a fairly ample skirt, which covered the knee. Beneath were baggy trousers, reaching to the ankle, usually with a frill at the bottom.

This attempt to reform women's dress caused an amazing outburst of excitement, ridicule and condemnation. Victorian men saw it as an attempt to 'wear the trousers', and an attack on their privileged position. Punch brought out a series of cartoons, showing timid men being bullied by their bloomer-wearing wives.

As the husband, shall the wife be; he will have to wear a gown
If he does not quickly make her put her Bloomer short-coats down.

Most women saw bloomers as shocking and outlandish, and they were only adopted by a few women of 'advanced' views. As an attempt to influence contemporary fashion, the bloomer movement was a total failure; it was premature because male dominance saw its height in mid-19th-Century society. But the bloomer had not gone for good.

By the 1880s, attitudes were changing. The Rational Dress movement condemned the unhealthiness of the fashions of the time. The members were particularly concerned about corsets, which even young girls wore to compress their waists as close as possible to the ideal 18 inches. These were responsible for fainting fits and, occasionally, permanent harm. As women began to lead more active lives, clothes became less constricting. Women wanted to walk and take part in sports such as tennis and, by the 1890s, they wanted to ride bicycles.

Bicycles had originated in the 1830s, but they had not been a practical form of transport. It was not until the Rover safety bicycle was introduced, in the 1880s, followed by the invention of the pneumatic tyre, that bicycling became a pleasure. It was adopted enthusiastically, particularly by the lower middle classes. For women, bicycling was not only a healthy exercise, but also a liberating experience. They were free to explore the countryside, either on their own, or in the company of men.

Of course, the passion for bicycling made a change in women's costume essential, as you can't ride a bicycle in a flowing gown. Divided skirts were one solution, as were baggy knickerbockers and bloomers that lacked the skirts of the earlier versions. These caused almost as much excitement and controversy as they had done in the 1850s, being ridiculed in the press and denounced from the pulpit. However, young women went on wearing them. Gwen Raverat, growing up in Cambridge, said 'Everyone had bicycles... and they became the smart thing in society... We were then permitted to wear baggy knickerbockers, horribly improper, but rather grand... I only once saw a woman (not, of course, a lady), in real bloomers.'

The Decline of Bloomers

In the 19th Century, bloomers and divided skirts were worn only for bicycling, other sports and outdoor activities. For daily wear, long dresses remained normal until well into the 20th Century. Bloomers became shorter by the 1920s and began to disappear once it was respectable for women to wear trousers and shorts. However, they lingered on as baggy, knee-length shorts, fastened at or above the knee, which were worn by girls for physical education classes as late as the 1950s. The word was also used to describe women's baggy, knee-length knickers. These were popular in the 1910s and 1920s, but continued to be worn by older women for some decades afterwards.

We may laugh at the fashion for bloomers now. However, as today's young women go out in mini-skirts and shorts, they might spare a thought for their counterparts in the 1890s. It must have taken them a certain amount of courage to venture forth in bloomers to ride bicycles.