Stairs Content from the guide to life, the universe and everything 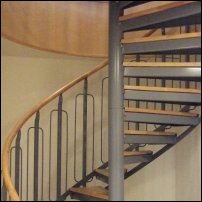 Stairs are objects which are built in staggered horizontal positions forming a jagged edge along which a person is capable of ascending or descending, usually between floors. A single stair is not of much use1, except for step-aerobics. These kind of stairs are usually found in groups.

A group of stairs is called a case, or a staircase. In the instance that a staircase is surrounded by walls, the surrounding walls and the enclosed area is often referred to as a stairwell. Individual stairs are often coated on the top by a high-friction rubber-like substance to help prevent feet slipping as pressure is exerted from the foot onto the stair.

There are many types of staircase, and they are not all constructed in the same manner.

The 'Normal Straight Vertical' staircase is the most common type of staircase built these days. These staircases are all similar in that they travel along a straight horizontal path, and ascend linearly.

A winding staircase is a staircase that travels in any number of horizontal directions, so long as that number is greater than one. Winding staircases include all non-'Normal Straight Vertical' staircases. The most common type of winding staircase is the spiral staircase. Many years ago, in medieval times, spiral staircases were built in castles with the need to defend them in mind. So, they were built in a manner that would allow the defenders to be at an advantage as they descended the staircase - the staircases spiral clockwise in the upward direction and counter-clockwise in the downward position. This gave right-handed knights and castle defenders the upper-hand when descending on an enemy, since the wall would get in the way of the attackers.

Although stairs are infinitely useful, there exist other devices by which a person is able to travel some vertical distance. Some of the more popular alternatives are motorised and require very little work on behalf of the person wishing to use them, while others are potentially more strenuous than the stair.

An escalator is a device much like a stair2, except it performs the climbing on behalf of the person wishing to use it. A person uses it by first stepping onto either the bottom-most or top-most stair while that stair is in motion and waiting until the stair they have stepped onto has reached the other end of the escalator. Upon reaching the other end, the person steps off, taking care not to let his or her shoelace get caught in the moving stair.

The name 'lift' neatly describes completely and accurately what a lift3 does. Much like an escalator, a lift requires no actual climbing on the part of the person. A lift is a motorised box which moves either up or down depending on which button the person wishing to use it presses and the current position of the box.

This type of vertical transportation is the oldest form used by man as it occurs naturally in the form of hills and mountains. Usually, climbing an inclined ramp requires greater physical exertion than climbing stairs. This is due to the fact that stairs occur in a series of discrete heights; that is, a person can climb a single stair and, having accomplished that, be standing on level ground. An inclined ramp, however, forces the user to stand at some non-level angle until they have successfully climbed the entire ramp. Ramps are most often used in modern days as access for people in wheelchairs. Some countries require wheelchair access ramps by law.

Perhaps the most evil means of vertical transport is that most heinous of crimes against motion - the inclined staircase. Frequently found carved into hills, this type of stair case combines the worst points of stairs and ramps, with large exertions and no flat places to rest in between.

The quickest and most efficient way of covering some small vertical distances is by use of gravity. Gravity is only ever used to travel downwards and it is often used accidentally, resulting in injuries to the unwary person. This mode of vertical transportation requires absolutely no physical exertion of the person using it unless they choose to flail their arms to let passers-by know that they had not intended to be using this mode.

Phantom stairs are not actually stairs at all. A phantom stair occurs in the imagination of an overconfident stair-user and manifests itself as a stair that is above or below the top-most or bottom-most actual stair. Phantom stairs very rarely occur in groups, because when a person discovers a phantom stair, they almost always realise that it was a phantom stair and become conscious of the fact that no more actual stairs exist in the direction they were travelling in, and are the most common type of single stair.

The phantom stair phenomenon occurs when a person unconsciously attempts to climb or descend one stair more than actually exists. For example, assume a person has climbed to the top of the uppermost stair in a staircase. Sometimes this person might accidentally, and quite unknowingly, try to climb one step higher. This person is currently standing on the floor at the top of the last stair, but they lift their foot as if to place it on top of another stair, which does not exist. They are unconsciously expecting their foot to stop at some set distance above where it started, but it fails to stop. This usually results in some imbalance which is generally not severe enough to cause a person to fall.

How to Avoid them

Phantom stairs are easily avoided if the person pays close attention to the stairs as they attempt to ascend or descend them. By watching each step as they pass it, the person will realise when they have run out of actual stairs to climb and will not attempt to climb any non-existent stairs. However, most people do not spend a great deal of concentration power on the simple act of climbing or descending a staircase, and it is this fact that causes phantom stairs. Phantom stairs do not occur every time a person fails to pay adequate attention to the stairs being used; in fact, the occurrence of phantom stairs is somewhat low compared to the number of times a staircase is used without complete concentration.

1While not of much use, single stairs are of some use. Some applications of single stairs include access into a home in which floor level is slightly higher than ground level and access to a shelf that is just a touch higher than a person is capable of reaching.2Like stairs, most escalators are more than a single stair in height. The King of Saudi Arabia, however, had such difficulty in climbing a single stair that he had a single stair escalator built for specifically for him.3In some areas of the world, the lift is called an elevator.