Robert E Lee and His Pet Chicken - A Study in Southern Gentility Content from the guide to life, the universe and everything 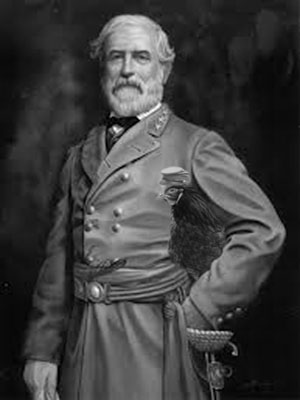 The real gentlemen of the South are restrained by considerations of family pride, and family prestige, if by none more honorable, from participating in those disgraceful practices so well calculated to tarnish the family escutcheon, and to render themselves the unworthy descendants of the compatriots of the Hero1 of Mt Vernon.2

When people speak of the 'Southern Gentleman' – you can almost hear the capital letters – one of the first names that comes to mind is that of Robert E Lee, the premier general of the ill-fated3 Confederate Army. Lee had it all: the famous family, the elegance, the honour code, the fancy horse and the athletic prowess. He lost a war – but he did it with style.

He also had a pet chicken.

These facts are not as unrelated as one might think, in that foreign country known as the past. To understand the story, it might be good to study Lee's background, and the very odd set of cultural ideas that made the descendants of planters feel that they represented the pinnacle of human social development.

Where Did These People Come From? (And Could We Send Them Back?)

To begin with his pedigree, then, we may say, the Southern Gentleman comes of a good stock. Indeed, to state the matter fairly, he comes usually of aristocratic parentage; for family pride prevails in a greater extent in the South than in the North. In Virginia, the ancestors of the Southern Gentleman were chiefly English cavaliers, after whom succeeded the French Huguenots and the Scotch Jacobites...4

Robert E Lee was the son of Revolutionary War General Henry 'Light-Horse Harry' Lee, a scion of the Lees of Old Virginia. These people were considered aristocrats in a country that nominally did not recognise such things. The Lees were members of the 'FFV' – First Families of Virginia, an elite group whose lineage often reached back as far as the 17th Century entrepreneurial planters of tobacco-mad Jamestown. Virginia planters specialised in elaborate manners, ancestor-worship and the general belief that they were continuing the grand traditions of an English approach to country life that was at least a century out of date. They had some of the finest minds of the early 18th Century.

Lee's father suffered severe financial losses due to his inability to manage his affairs. In fact, he once fled the country to escape his creditors, and eventually landed in debtors' prison. Lee inherited an illustrious name, a lot of land, a number of other human beings and no money. It was his responsibility to take care of all this. He took it very seriously.

Besides being of faultless pedigree, the Southern Gentleman is usually possessed of an equally faultless physical development. His average height is about six feet, yet he is rarely gawky in his movements, or in the least clumsily put together; and his entire physique conveys to the mind an impression of firmness united to flexibility.5

Lee was an exemplary student at West Point, and as an army officer he did a lot of first-rate engineering. Lee was picture-perfect: handsome, a splendid horseman, well-spoken and dedicated. This did not make him a good marriage prospect as far as his future father-in-law was concerned.

George Washington Custis, grandson of Martha Washington, was the self-appointed guardian of the George Washington legacy, as well as owner of Arlington, where he built a fine mansion to house his Washington memorabilia. Custis was not related to Washington by blood, being descended from Martha Washington's first marriage6, but he needn't have felt less aristocratic on that account: the owner of Arlington could count Lord Baltimore and various Hanoverian and Stuart worthies among his ancestors. He didn't think the son of disgraced Light-Horse Harry Lee was good enough for his daughter Mary, no matter how much in love they were. Lee won him over, eventually.

It is hard, if not impossible, for us to understand the mentality behind a group of people who lived by an 'honour code' based on pre-Enlightenment values. No matter how wealthy – and, unlike Lee, most of them were – or well-behaved, the planters were throwbacks to an earlier time. In fact, by 1850 it was almost impossible for anyone in New York or Pennsylvania to empathise with these people and, increasingly, they spoke of two cultures. This clash of cultures and ethical systems contributed in no small amount to the breakdown in compromise that led to the American Civil War.

Faced with the choice between staying true to the army he had served in the Mexican War and dug ditches for from one end of the nation to the other, or defending the sovereign Commonwealth of Virginia, Lee was forced to make a difficult decision, but one that to his mind was right. To the fury of his superior General Winfield Scott, Lee resigned and joined the Confederates. No true Southern Gentleman could do anything else.

They made him a general.

So What About the Chicken?

I do not know what you will do with your chickens, unless you take them to 'Bremo,'7 and thus bring them here. I suppose Robert would not eat 'Laura Chilton' and 'Don Ella McKay.' Still less would he devour his sister 'Mildred'8 . I have scarcely gotten acquainted with the young ladies. They look very nice in the walks, but I rarely get near them. Traveller is my only companion… – Robert E Lee to his wife, October, 1865.

1862: Lee's army moved around a lot and had a lot of mouths to feed. One day, a shipment of chickens arrived by rail. The state of food preparation being what it was, these chickens arrived 'on the hoof', as it were. One sensible little black hen was apparently brighter than her sisters. Somehow divining that life in the flock was going to be nasty, brutish, and short, she took refuge in a tent where the flap had been left open. Hiding under a cot, she laid an egg and sat on it.

That's how General Lee found her. It was his tent, after all. He decided to keep her. For the next couple of years, Nellie Hen laid an egg just about every day, which must have been a welcome addition to the general's diet. Lee was proud of his pet chicken – keeping pet chickens was a family tradition. He was fond of Nellie, just as he was fond of Traveller, his magnificent white horse, and just as he was fond of his soldiers and his servants.

Gettysburg, the high watermark of the Confederacy. Gettysburg, the evil three-day carnage that settled nothing and left 51,000 dead, wounded or missing. What was left of Lee's army turned back southward. The general was about to go with them when... wait!

Nellie Hen was missing. A mad search began. Soldiers helped – armies need good-luck charms, and soldiers are as superstitious as sailors. Finally, after much searching, Nellie was found, sitting quite sensibly out of the line of fire in an ambulance. Yes, of course she'd laid an egg.

Everyone, it seemed, had a part to play in the Civil War. Nellie Hen played hers. And, like so many others, she became a casualty of war in the end. Or did she?

This part of the story may be true, or it may be legend. The man who told it claimed in his autobiography to have been Robert E Lee's cook during the war. This may have been true, though some doubt it. The publisher of his memoirs, which were obviously ghost-written in exaggerated 'dialect', may or may not have believed it, but he didn't have the benefit of historical records that could be searched. The man himself had motivation for making the claim – he was a Baptist preacher trying to raise money for his church, and claiming to have been associated with a revered figure in the South would put money in his coffers. Nonetheless, we're not sure.

Do we believe that one black day on the eve of the Battle of the Wilderness (human death toll: 11,400), when Confederate supplies were running low and generals were coming to dinner, the cook, in despair at his empty larder killed and served Nellie Hen? If so, surely Robert E Lee was grieved. Probably nothing in the world would make a losing general in an insane war feel worse than finding out that he'd consumed one of the few creatures left with whom he shared an uncomplicated and amicable relationship. But wait – this alleged cook's memoirs claim that Stonewall Jackson was there. Stonewall Jackson died in 1863, and this was 1864...

Let's choose not to believe it. Let's decide that the publisher was a charlatan and the preacher a clever liar. There were probably as many lies told after the Civil War as before. If you want to read the book and decide for yourself it's available online. As for us, we'll just imagine that Nellie Hen lived to a ripe old chicken age, beloved of General Lee.

There have been at least two famous chickens in Western history: Nellie Hen has to be right up there with the Ghost Chicken of Highgate. For a chicken, alas, as for a man, fame is fleeting: the one ends up in the stewpot, the other in the ground, while historians argue, pontificate and tell whoppers about them. And we try to figure out, 'What were they thinking?'

1Mt Vernon was the home of George Washington, who presumably fit to a T the image of a 'Southern Gentleman'.2Several quotes here are from that inimitable volume, Social Relations in Our Southern States, New York: HB Price, 1860. Author: Daniel R Hundley aka Daniel Robinson (1832-1899). The curious are invited to peruse this volume online, as the author would no doubt have put it. 3The term 'ill-fated' fits the Confederacy. So does the phrase 'ill-conceived'.4Ibid.5Ibid.6Martha Washington was the widow of Daniel Parke Custis who died in 1757. George Washington Custis' father was John Parke Custis, son of Martha and Daniel, and therefore Martha's grandson.7'Bremo' was the name of an estate.8'Laura Chilton', "Don Ella McKay', and 'Mildred' were chickens. Mildred was also the name of Robert E Lee's youngest daughter, which is why Lee says he doesn't believe his son Robert would 'devour his sister Mildred'. Family jokes are sometimes impenetrable to outsiders.