Superstitions Content from the guide to life, the universe and everything 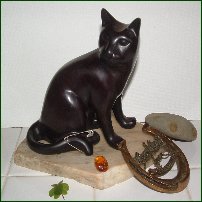 Basically, superstitions are either signs which people observe to gain good luck or to stay clear of bad luck. People who take superstitions very seriously are often inspired by a belief in the supernatural. There are still others who believe in superstitions however much they are disproved.

Superstitions have evolved over a very long time. People just seem to need something, or someone, to blame if their life goes drastically wrong. For example, if someone has some unexpected bad news it can be more acceptable for them to put the blame on the ladder they walked under earlier that morning, rather than face a difficulty as their own responsibility.

There appear to be more superstitions about avoiding bad luck than there are about creating good luck. Perhaps this is because people like to think that if something good happens it is due to their own hard work or because they deserve it, whereas when something bad happens people don't like to blame themselves.

Below are some of the more common superstitions: