Pins Content from the guide to life, the universe and everything 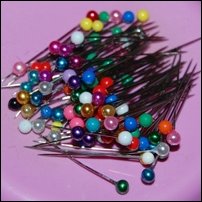 In both object and in word form, pins enter our world many times a day. Pins may well not be used as much as other items such as paper or pens, or even thrown around as much as the words 'the' or 'a', but in their various forms pins are vital to industries such as the tailoring or the cooking industry.

This entry attempts to look into the various uses of pins but in no way claims to be completely comprehensive.

Pins of the Fastening Variety

Pins are small, usually metal objects which can attach one object - such as a piece of cloth - to another, similar object. There are many different kinds of pins and they are made in many different shapes and sizes. You should be very wary of pins as most are very sharp and can pierce the skin causing pain (nerve stimulation) and blood loss1. There are several kinds of these types of pins and they are used for different purposes. These pins leave 'pin holes,' which are small perforations.

These are short pins that are often made of brass. They have a disc made of the same material as the pin at one end, which enables a person to push the pin into a semi-solid surface. The other end of the pin is a sharp point. Drawing pins are used to secure notices and other similar documents to walls or notice boards: pressure is applied to the disc causing the point at the other end to penetrate the surface. A disadvantage of using drawing pins in this way is that they can become bent when unevenly-distributed pressure is applied to the disc to make the pin stick into a wall. This makes the pin useless, the person angry, more perforations in the surface punctured and less drawing pins to utilise. Drawing pins are often used to display the many greetings cards received on various festive occasions, posters that allow you to ogle your latest pin-up2 and useless paper decorations. Drawing pins are also known as thumbtacks.

These are longer than drawing pins, usually about 3cm long. They are usually made of hardened and polished steel. They have a very small head and a sharp end, which is used widely in tailoring industries to hold pieces of material (cloth, leather and so on) together. These are the pins that one would use to tack up hems and cuffs while performing alterations on a piece of clothing.

These pins are considerably different in appearance to drawing pins as they are used for different purposes. A safety pin consists of two parallel pieces of metal wire held together at the ends with stronger, round-ended pieces of metal. To fasten this pin to various materials, the parallel metal wires must be squeezed together, causing the end of one of them to separate from the round-ended metal piece at one end. The wire is very sharp, so care must be taken to ensure that you do not puncture your skin. The pin may now be pushed through the material, and the separated wire then replaced to secure the pin and material.

Safety pins are used commonly attached to the back of ornaments to facilitate the pinning of these decorations onto clothes, bags, and other articles of clothing. These pins are then known as brooches.

Hat pins are usually made of metal and have a round head. They are used to secure a hat to a lady's head. They usually used to have decorative heads as they were one of the accessories women used to wear. The pins are about 22cm in length.

Clothes pins are formed from two pieces of wood or plastic which have been bound together with a wire. Acting as a sort of pincer, they are used to pin wet clothes onto the laundry line. The groove on each side of the pin allows the clothes pin to clasp tightly to the wet apparels and not fall off the line when a strong gust of wind blows. Clothes pins are also known as clothes pegs.

Pins of the Non-fastening Variety

The function of the rolling pin does not conform to the standard 'fastening together' role we may normally expect from pins. The rolling pin is used for flattening and stretching dough or other mixed ingredients as part of the preparation/cooking method. Rolling pins are usually made from wood, although nowadays they are often made from plastic. They are cylindrical in shape and are typically around 12 inches long, although length can vary. Some persons may decide to use a rolling pin in the manner of a club (for hitting other persons over the head). This is not considered very polite or nice.

These pins are used in the game of ten-pin bowling and other variants. They are shaped like a baseball bat but with a flat end so that they will be able to stand on the floor. They can be found in bowling alleys or in children's bedrooms, as toys. In the bowling alley, they are usually knocked down by a bowling ball and a score is obtained based on the number of pins scattered.

These pins are used to mark off important points in ones knitting or to pin on patterns onto the knitting. They are common tools for any seasoned knitter. They are usually about six centimetres long with a blunt point and a colourful heads that may or may not be shaped like petals.

Usage of the Word 'Pin'

Apart from all of these types of pins, there are the many varied uses of the word pin such as:

1Although luckily this is usually short-lived and the puncture wound will heal fairly quickly (depending on the depth of the wound).2Your latest crush or perhaps the person you admire.3British plugs tend to be three-pinned, whereas most of Europe uses two-pinned plugs.4Also known as an ATM.