John Brown's Body: The Battle Hymn of Snark Content from the guide to life, the universe and everything 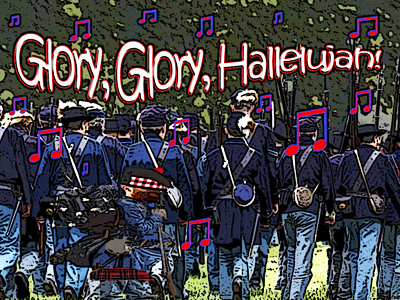 'Folk' songs have curious lives1. Often, their origins are obscure. But one popular folk number, 'John Brown's Body', can be traced to its exact time and place of origin. That is, if an old soldier's tale in a magazine article can be believed.

Let's see if we can sort out the tale, and figure out whether this song was intended to be spiritual, uplifting, or just plain fun.

Fact: The tune to 'John Brown's Body' is much older than the American Civil War. It's called 'Say, Brothers, Will You Meet Us?', and originated as a camp meeting song. A camp meeting was the early 19th-Century version of a rock festival.

People attending camp meetings came from miles around on foot, on horseback, or in wagons. They camped out in a designated field, rather like Woodstock. Unlike for the Isle of Wight Festival, there was no admission charge. However, voluntary collections were raised. The show consisted of group singing, followed by stand-up in the form of vociferous and often athletic preaching accompanied by gesticulations2. When the preaching and singing had gone on for long enough, there were usually outbreaks of bizarre behaviour, such as fainting spells, fits of 'the jerks' (rapid shaking of the head), rolling on the ground (hence the term 'holy rollers'), uncontrollable laughter, singing, or dancing. Surprisingly, unlike rock festivals, camp meetings were not known for widespread drug consumption. Like rock festivals, camp meetings were known to result in baby booms nine months later.

As the century wore on, the calmer variety of church-goers became increasingly annoyed by this sort of carry-on in the name of religion. They set up 'vigilance committees' that prevented a lot of the rowdiness. They limited outbursts of psychological phenomena to designated periods between sermons. In short, they made camp meetings more like large church services. This led to the swift decline of the camp meeting as a form of popular entertainment.

As camp meeting songs went, 'Say, Brothers?' was pretty tame stuff. By the 1850s, it was showing up in hymnbooks.

Enter the Tigers. That's what the enthusiastic young martial hopefuls of the Second Battalion of Infantry called themselves. This militia outfit was organised in Boston, Massachusetts in April 1861. The US Civil War was just getting started, and they were expecting to join it shortly. In the meantime, they had this old fort in Boston Harbour to renovate. It took a lot of elbow grease and some lusty singing. The Tigers were pretty indiscriminate in their musical tastes. They'd sing anything from a barroom ditty to a hymn. One of their favourites was – you guessed it – 'Say, Brothers, Will You Meet Us?' It had a good beat to it, suitable for swinging shovels to.

We know the names of some of these volunteers. They were George Kimball, who lived to tell the tale, and his friends Newton J Pernette, James E Greenleaf, GS Brown, James H Jenkins, CEB Edgerley, among others. But the most notorious of the crowd was a Scotsman who bore the unfortunate name of John Brown. John Brown was the life of the party. John Brown was a cut-up, a joker, an instigator of pranks3. And he happened to have the same name as the most divisive figure in recent political history, apart from Abraham Lincoln himself. That John Brown, the domestic terrorist responsible for the Harper's Ferry Raid, was a hero to some and a villain to others. That John Brown was also dead – after being captured by Robert E Lee, the same former US officer who was now commanding a portion of the enemy army.

Scotsman John Brown didn't stand a chance. He was bound to end up as the butt of a joke.

A great deal of pleasantry was indulged in at his expense, and he was often guyed unmercifully. If he made his appearance a few minutes late among the working squad, or was a little tardy in falling into the company line, he was sure to be greeted with such expressions as 'Come, old fellow, you ought to be at it if you are going to help us free the slaves'; or, 'This can't be John Brown – why, John Brown is dead.' And then some wag would add, in a solemn, drawling tone, as if it were his purpose to give particular emphasis to the fact that John Brown was really, actually dead: 'Yes, yes, poor old John Brown is dead; his body lies mouldering in the grave.'
- George Kimball, 'The Origin of the John Brown Song', in The New England Magazine, December 1889. (New Series, vol 1, Nr. 4.)

You can guess what happened next. John Brown became the subject of a marching song. Verses were added: 'He's gone to be a soldier in the army of the Lord,' 'His pet lambs will meet him on the way,' and even 'We'll hang Jeff Davis on a sour apple tree.' The band picked up the tune and played it at formations. 'John Brown's Body' spread through the Union Army like wildfire, becoming a popular marching song.

So how did this raucous piece of military humour turn into the solemn 'Battle Hymn of the Republic'? Enter the serious people.

Julia Ward Howe was a gifted poet. After her stuffy father and unsupportive husband died, this amazing lady really came into her own, becoming an icon of the women's suffrage movement and a famous writer4. The whole thing really wasn't her fault. But in December 1861, Mrs Howe and her husband, reformer Samuel Gridley Howe, were in Washington City visiting Abraham Lincoln, along with James Freeman Clarke, the high-minded Boston theologian who'd donated the land for an army camp5.

The party happened to hear 'John Brown's Body'. Clarke and Samuel Gridley Howe weren't amused at the 'low tone' of the song6. Reverend Clarke suggested that Mrs Howe, being a published 'poetess', should give the tune more 'dignified' lyrics. So we got this:

I have read a fiery gospel writ in burnished rows of steel:
'As ye deal with my contemners, so with you my grace shall deal';
Let the Hero, born of woman, crush the serpent with his heel,
Since God is marching on.

And more of the same, including this rather quiet verse:

In the beauty of the lilies Christ was born across the sea,
With a glory in His bosom that transfigures you and me.
As He died to make men holy, let us die to make men free,
While God is marching on.

I have not been able to guess where Julia Ward Howe got these lilies in the beauty of which Jesus is supposed to have been born. The only lilies mentioned in the Gospels are those that toil not neither do they spin. Was she thinking of Easter lilies? But these are associated not with Christ's birth but with His resurrection. In any case, they serve to place Him in a setting that is effeminate as well as remote.
- Edmund Wilson, Patriotic Gore: Studies in the Literature of the American Civil War, 19627.

We're told repeatedly that 'Battle Hymn of the Republic' became the Union's most popular marching song, but we don't believe it. We think it was good old 'John Brown's Body'.

We don't know what John Brown of Scotland and Massachusetts thought of 'Battle Hymn of the Republic'. Alas, according to his friend, George Kimball, Brown 'found a watery grave in the Shenandoah River at Front Royal, V[irgini]a., on the 6th of June, 1862, while serving in the same company with the writer, Company A, Twelfth Massachusetts Volunteers.' A sad end to the source of all this musical fun. He should at least have lived to see the fall of Richmond.

Mine eyes have seen the glory of the burning of the school,
We have captured all the teachers and have broken every rule.
We have broken into the office, and we've burned all the books,
And we now hold the title of Junior National Crooks8.

Sri Lankans reportedly sing bilingual parodies at cricket matches. According to the Mudcat Café, a folk song website, communists have been known to sing threats to 'make Eleanor Roosevelt use a Brooklyn accent when she speaks' or 'make Ian Paisley join the IRA'/'when the Red Revolution comes.' The same source reports that less political singers intone, 'I wear my pink pyjamas in the summer when it's hot.' The number of 'John Brown' parodies seems endless. Some are serious in tone, others less so.

'John Brown' parodies weren't popular during the Spanish American War of 1898. Instead, the Rough Riders charged up San Juan Hill singing 'There'll Be a Hot Time in the Old Town Tonight'. Soldiers from both the US and UK, however, picked the tune up during the First and Second World Wars. They used it to mock at everything from the top brass to parachutes that didn't open. The air forces and paratroopers were particularly inventive.

One thing is clear: the more down-to-earth, snarky, or just plain vulgar these parodies are, the closer they come to the spirit of those original volunteer soldiers.

Glory, glory, hallelujah,
And we go marching on!

1The great Tom Lehrer once noted that the main trouble with folk music was that it was 'written by the people'.2Abraham Lincoln said, 'When I hear a man preach, I like to see him act as if he were fighting bees.'3Rather like another John in a famous band.4Although her most intriguing novel, The Hermaphrodite, wouldn't be published until 2004. We wonder why.5Camp Andrew, the Massachusetts training camp, was built over the ruins of the hippie commune…er, utopian community known as Brook Farm. Nathaniel Hawthorne wrote a snarky book about Brook Farm called The Blithedale Romance.6We have no record of what Lincoln thought, but we can guess.7Wilson also notes similarities between Howe's lyrics and Macaulay's poem about the Battle of Naseby.8Oral communication, c.1961, Macon Elementary School, Memphis, Tennessee, USA.