The Isle of Wight Festival: An Overview Content from the guide to life, the universe and everything 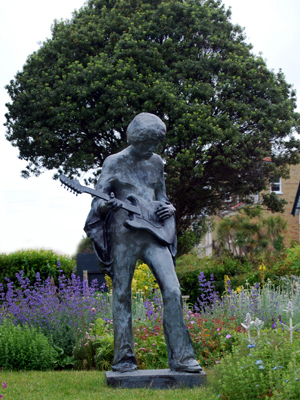 The Isle of Wight Festival3 was held in various locations between 1968 and 1970, but since 2002 has been held at Seaclose Park.

The Isle of Wight Festival is a story of how to fail to build a swimming pool in style. In the late 1960s there were no municipal swimming pools on the Isle of Wight. People wanting to go swimming were forced to either visit one of the Island's beaches or the outdoor Blue Lagoon swimming pool in Sandown, neither of which were popular in the winter. The local council was uninterested in paying for a pool, so local residents decided to hold a music festival to raise money for the cause. Although it failed to raise enough money, and sadly made a loss, it did pave the way for a second festival the following year4.

In 1969 one man helped turn the fledgling festival into a major musical event. Two years after his last live performance, shortly before a serious motorcycle accident, Bob Dylan, one of the most popular and influential musicians of his age, was living in seclusion at his home in Woodstock. Hoping to wean him back into public life, he received offers inviting him to perform at two different music festivals; the first, Woodstock, was to be deliberately held near his home to make it easy for him to attend. Bob Dylan chose instead to travel across the globe to perform at the 1969 Isle of Wight Festival, which was advertised as 'Bob Dylan's Only Appearance in the World'. Highlights of Bob Dylan's 1969 Isle of Wight Festival appearance can be heard on his Self Portrait' album. Although 2010 is the first time Paul McCartney has been to the Isle of Wight Festival, in 1969 John Lennon, George Harrison and Ringo Starr5 attended in the audience, watching Bob Dylan perform. In 2004 Ringo Starr's son, Zak Starkey, performed at the Isle of Wight Festival, drumming for The Who.

Sadly, the festival was a victim of its own success; many of the 700,000 attendees chose to sit on Afton Down, the hillside overlooking the 1970 festival site, watching the festival for free at a distance. Others, who refused to pay, rioted and broke into the festival site itself.

Parliament responded with the 1971 Isle of Wight Act which was specifically designed to prevent music festivals from taking place on the Isle of Wight. No unauthorised gatherings of more than 5,000 people could take place on the Island, and the hours in which large crowds could assemble were restricted to before midnight.

Since the passing of the 1971 Isle of Wight Act, other festivals, such as the Reading and Leeds festivals have arisen - most notably Glastonbury, which has replaced the Isle of Wight Festival as Britain's largest music festival. Glastonbury also suffered until the mid-1990s from riots and attempts to break into the festival grounds, with attacks on the toilets common at the Reading and Leeds festivals too. Fortunately in recent years the majority of festival goers are from a younger, more responsible generation who expect to pay to attend music events.

In 2002 permission was granted to re-establish a music festival on the Isle of Wight, firstly with a one-night event, known as Rock Island 2002, held at Seaclose Park, as well as surrounding fields and the neighbouring Medina arboretum. Seaclose Park was deemed a better location for the festival than sites in Godshill, Wootton and Freshwater, used for previous festivals. Being in the centre of the Island, Newport, the capital, is easy to get to from any of the ferries and has regular bus links. Newport, being one of the larger towns on the Island, is one of the few places that can cope with an extra 75,000 people – over half the population of the Isle of Wight – suddenly turning up on its doorstep. It has a reasonable selection of shops, supermarkets and pubs, and the festival site is within a very short walk from the town centre.

A larger, two-day event occured in 2003, but it was the 2004 festival, the first three-day festival since 1970, that put the Isle of Wight Festival back on the musical map, with the return of The Who, who had performed at the 1969 and 1970 festivals, as well as David Bowie, Stereophonics and Manic Street Preachers headlining. Since 2004 a three-day event has taken place every year at Seaclose Park in the second weekend in June.

The Isle of Wight Festival since 2008 progressed to two, and in 2009 three main stages: the Main Stage, in the main Seaclose Park field, the Big Top, a stage inside a large marquee, and the Acoustic Stage. The Big Top, being an almost fully enclosed space, is by far the loudest stage, but has a great atmosphere. The sound quality varies greatly in the field around the main stage depending on where you stand. As well as the stages, since 2002 there have also been giant screens showing the performances dotted around the site, as well as next to the stages. Although having more stages means that more acts are able to appear at the festival, sadly this means it is no longer possible to see everyone.

As well as the three official stages there are smaller stages inside the larger beer tents, where live entertainment is performed. There have also been, in European and World Cup years, giant television screens showing the football.

The Isle of Wight Festival, like most music festivals, charges more than average for food and drinks and food and drink brought into the area from outside. There is a wide variety of different types of takeaway food available at a convenient distance from the main stage and elsewhere, although the quality of the food varies greatly. It is worth trying to find the best and tastiest food stalls, or eating outside the festival venue if there are no acts on that you wish to see at the time. Queues for food become extremely long later in the day between the big acts, so it is worth eating early. There is also a fun fair, and a field with a wide range of stalls selling all sorts of things.

Tickets for the Isle of Wight Festival are expensive, however if you compare the price to the price to see two different big live acts at other arenas or stadiums, the price per hour works out quite reasonable for three days of entertainment, provided you see at least two or three acts you really like.

The Isle of Wight Festival has its own established joke, which goes something like this:

Mobile phone networks and manufacturers have sponsored the festival in recent years, including Nokia, BT and Blackberry. This is perhaps ironic, as the one electronic device that does not seem to work at the festival is indeed the mobile phone. Having almost 75,000 mobile-phone-owning people in such a comparatively small space, many of whom trying to keep in touch with other people there, completely jams the local mobile phone provision. With the volume from the stages making conversation difficult and the mobile network's reception unreliable as far as text messaging is concerned, anyone attending a festival is advised to arrange where and when to meet up with friends in advance.

Since 2002, like most large festivals, highlights of the Isle of Wight Festival have been broadcast on television on the weekend of the event. Between 2004 and 2007 the festival has had highlights broadcast by Channel 4, and between 2008 and 2010 the rights to broadcast have been bought by ITV2. As the broadcasts have been shown on commercial stations, there has usually been on average a five-minute advert break after every 10 minutes of programme.

After being at a festival, seeing the television broadcast can be quite disappointing. Although you do get to see the artists up close without anyone's head in the way, the television cameras don't always capture the atmosphere, the thrill of being there. And they also fail to capture the noise – a song that everyone was singing along to loudly in a deafening manner is shown at a reasonable volume on the television, with the 75,000 audience singing along reduced to a background noise.

This took place on a farm outside the sleepy village of Godshill on 31 August, 1968. It was also known as 'The Great South Coast Bank Holiday Pop Festivity'

This took place outside Wootton.

This was the first to use the current site of Seaclose Park, Newport. From this festival's humble relaunch the Isle of Wight Festival's continued success would emerge.

Starsailor became the first act of the 21st Century to return to the Isle of Wight Festival.

A DVD entitled Isle of Wight Festival 2004 was released. This contained songs from the performances by Stereophonics, Manic Street Preachers, Snow Patrol and Jet, but curiously not the main headline acts of The Who and David Bowie.

Snow Patrol became the first act at the Isle of Wight Festival to appear one year (2004) as a support act and return the following year as a headliner.

Starsailor became the first act to appear three times at the Isle of Wight Festival in the same decade.

So far, 34 acts have performed at the Isle of Wight Festival more than once. Two acts have appeared at four festivals:

Twenty-six acts have appeared twice. The biggest gap between the first and second appearance held by Melanie, who returned to the Isle of Wight Festival after a wait of 40 years.

Curiously, the most common word in the name of acts performing at the Isle of Wight Festival9 is 'black'. Bands have performed with the names of:

Since 2004 the Isle of Wight has also hosted a second, smaller, annual music festival. This, called the Bestival, has been held in Robin Hill, a nearby country park in the heart of the Island's Area of Outstanding Natural Beauty.

The acts that have performed at the Bestival include:

Since 2004, outdoor music events have also been held in the grounds of Osborne House.

1Although there were established jazz, blues and, in America, folk festivals. Some of these, such as the annual Windsor Jazz and Blues festival, did sometimes feature rock and pop artists, including The Rolling Stones and The Who, however at the time they were dominated by jazz or blues music.2This was the Festival of Flower Children held in Woburn Abbey, headlined by The Bee Gees and Marmalade.3The Isle of Wight also has an annual Garlic Festival, Cycling Festival and the UK's largest Walking Festival, but it is the music festival that eclipses all others.4Fortunately the Isle of Wight now has a selection of municipal swimming pools in many of the main towns on the Island, including at the Medina Leisure Centre next to the Seaclose Park site used for the Isle of Wight Festival since 2002.5Paul McCartney was expecting the birth of his first child at the time.6This was Jefferson Airplane's first UK visit and performance.7Of The Kinks8Formerly of The Spice Girls9Excluding 'the' and 'and'.