Blondie - the Band Content from the guide to life, the universe and everything 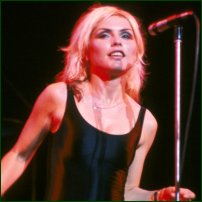 Blondie are an American rock group considered to be one of the pioneers behind the punk and new wave music scene in the USA. Fronted by the charismatic Debbie Harry, they were more successful overseas than in their home country, notching up six number one singles in the UK to date, as well as a string of hit albums.

The band first formed in 1975 from the ashes of another group, The Stilettos, which featured Harry on vocals and founding Blondie member Chris Stein as guitarist. The pair, who became romantically linked while playing in the band together, formed a new group featuring drummer Clem Burke, bassist Gary Valentine and Jimmy Destri on keyboards. Originally called Angel And The Snake, they renamed themselves Blondie as a tribute to Harry's blonde hair and the many comments she received from admirers.

Their debut album Blondie was released in 1976, with early singles including 'X-Offender' and 'Rip Her To Shreds'. The band also underwent a change in line-up when Valentine left, to be replaced by Nigel Harrison. Another guitarist, Frank Infante, also joined.

Blondie had their first taste of commercial success purely by accident. In 1977, the Australian music show Countdown mistakenly played the video for the B-side of 'X-Offender', a ballad called 'In The Flesh'. While 'X-Offender' was a punk song, 'In The Flesh' - which had a kind of 60s girl group feel to it - had more commercial appeal, and as a result of its unlikely exposure, both single and album were swiftly propelled into the Aussie top five.

In 1978, success in the UK swiftly followed on from the release of their second album, Plastic Letters, which spawned two hits, 'Denis' and '(I'm Always Touched By Your) Presence, Dear'. However, it was their next long-player, Parallel Lines, which finally turned them into stars in their own country, with the third single from the album, 'Heart Of Glass', a worldwide smash. It topped the charts both in the UK and the US, as well as numerous other countries. Other hits from Parallel Lines included 'Hanging On The Telephone' and 'Picture This'.

The hits kept coming in the UK, including the chart-toppers 'Sunday Girl' in 1979 and 'Atomic' in 1980 (the latter taken from their fourth album Eat To The Beat), but they didn't repeat the same level of success in the US until the release of 'Call Me' later that year. The theme from the steamy Richard Gere movie American Gigolo, it spent seven weeks at number one in the US charts and was number one for two weeks in the UK.

A further US chart-topper followed in the shape of 'The Tide Is High', from their fifth album Autoamerican. The second single from that album, the rap-inspired 'Rapture', also hit the top spot in the US although it only managed to reach number five in the UK. It was the first song incorporating elements of rap to top the American charts.

The band broke up in 1982 after their sixth album, The Hunter, received poor reviews, and Stein became ill with the rare, potentially fatal skin disease pemphigus, from which he later recovered.

Harry launched a solo career, with notable hits including 'French Kissing In The USA' and 'I Want That Man', as well as adding a string of films to her CV (she had already done some acting while in Blondie, appearing in such films as Union City in 1980 and, in the following year, New York Beat Movie, which followed a day in the life of the offbeat street artist Jean-Michel Basquiat). She starred alongside James Woods in David Cronenberg's controversial 1983 horror movie Videodrome, and also had notable roles in Hairspray, Satisfaction (which starred a young Julia Roberts) and Tales From The Darkside: The Movie.

Debbie Harry also enjoyed some success as a jazz singer in the late 1990s, performing with New York band the Jazz Passengers and performing on at least two of their albums.

Blondie were reunited in 1998 - or at least partly - with Harry, Stein, Destri and Burke present and correct, joined by newcomers Leigh Foxx on bass, guitarist Paul Carbonara and Kevin Patrick on keyboards. Harrison and Infante had taken legal action to try to prevent the reunion from happening, but were unsuccessful. This led to conflict and an actual falling-out live on stage when the band were inducted into the Rock and Roll Hall Of Fame in 2006, with all the original members being invited.

Although the modern-day incarnation of Blondie hasn't hit the same heights of popularity they have still enjoyed a certain degree of success, notably with the UK chart-topper 'Maria' in 1999, as well as the top-20 hit 'Good Boys' in 2003. Their 1999 album No Exit also did well, and they continue to tour on a regular basis. A greatest hits album, Sight And Sound, was released in 2005.