Level 42 - the Band Content from the guide to life, the universe and everything 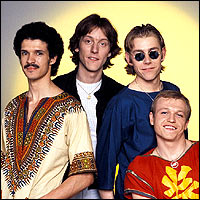 Level 421 was formed in 1980 by Isle of Wight residents Mark King (bass and lead vocals) and brothers Phil Gould (drums and vocals) and Boon Gould (guitar and vocals). They were joined by Londoner Mike Lindup (keyboards, percussion and vocals), who had become friends with Phil while at drama school. The band's music fused elements of pop, jazz and funk, leading to a style that became known as 'Brit-funk'2.

Mark is affectionately known as 'Thunder Thumb' because he plays the bass guitar incredibly loudly and quickly and because of his distinctive use of the 'thumb-slapping' technique3. Mark is also known for his distinctive voice, which is guaranteed to get the audience's attention, and a good sense of humour, which is evident during his chats with the audience in live performances.

Parallel to his Level 42 career, Mark has released a number of solo albums, of which Influences (1984) was the first. In addition to his virtuoso bass playing — the study of which has been described by one researcher as 'the best way to learn bass' — Mark also plays keyboards and percussion on the album and provides the vocals.

Trees destroyed by acid rain
Falling from the sky
When our children place the blame
Who will tell them why?
—'The Chant Has Begun'

Phil's trademark has been his vast collection of John Lennon-style glasses and shades. He is also known for his strong views on environmental issues, as can be seen in the lyrics of songs such as 'The Chant Has Begun', a warning about the dangers of abusing our world.

Phil has a very powerful style of drumming and, combined with Mark's bass playing, provides the band with a very tight rhythm section, a hallmark of the Brit-funk genre.

I won't be here when you come home
I'm sorry if you don't understand, forgive me if you can
But I can see another road
And I ain't coming back
—'It's Over'

Boon has always been the quietest member of the band, although not when playing the guitar. The best example of Boon's guitar skills can be heard on 'Lessons In Love', with its powerful beginning and soaring guitar solo. Reflecting his personality, Boon's songwriting is less aggressive than his brother's and is typified by the beautiful ballad 'It's Over', one of the most emotional songs that Level 42 have ever recorded.

Mike is a talented jazz keyboardist and a highly distinctive vocalist. Alongside his Level 42 work, he has also produced a solo album — Changes — with a different, more Latin-American feel. This is particularly evident on the track 'Passion'.

The band were first spotted by record producer Andy Sojka, which led to their debut single 'Love Meeting Love' being released in 1980. The success of the record in the specialist funk/disco charts was enough for them to release a second single, '(Flying On The) Wings of Love', later that year.

By this time the band, were signed to the Polydor record label and were impressing critics with their live shows, which in 1981 led to the release of their first Top 40 single, 'Love Games', and their debut self-titled album. Level 42 (1981) reached the Top 20 in the UK and was also a hit across Europe, most notably in the Netherlands.

Take a journey back in time
Leave the western world behind
Sacred knowledge, sacred ways
Pearls of wisdom from the dragon days
—'The Chinese Way'

1982 began with a retrospective release of the band's very first 'album', The Early Tapes, which had been recorded in 1980 before joining the Polydor label. The band followed the release with a three-month European tour and then a new album. The Pursuit Of Accidents (1982) again hit the UK Top 20, with the single 'The Chinese Way' reaching number 24.

Level 42's next album, Standing In The Light (1983), was produced by Larry Dunn and Verdine White, members of the 1970s disco outfit Earth, Wind and Fire, who dragged the band off to Los Angeles for the recording. They were rewarded for their efforts with Level 42's first UK Top 10 single, 'Living It Up (The Sun Goes Down)'.

For the next two years, the band continued their one-per-year album releases with True Colours (1984) and World Machine (1985), together with the live album A Physical Presence (1985). Their success in the singles chart also continued, with 'Hot Water', 'Something About You' and 'Leaving Me Now' all reaching at least the Top 20.

The years 1986 and 1987 were to prove critical in the history of Level 42. Things started well, with the release of their biggest hit, 'Lessons in Love', which reached number 3 in the UK singles chart. They followed this with a tour of the USA and a triumphant return to the UK with four gigs at Wembley Stadium.

1987 opened with the release of their new album, Running in the Family, and its title track as a single. The album — probably the band's best-known work — achieved platinum sales within one week of release, while the single reached number 6 in the charts. The album went on to spawn another two Top 10 hits: 'To Be With You Again' and 'It's Over'.

Sadly, the lineup that had lasted since 1980 was not to continue. Boon and Phil left at the end of 1987, citing the pressures of touring and some musical differences with the more pop-oriented direction the band was taking. When the final single from Running in the Family, 'Children Say', was released in November of that year, Mark and Mike appeared in the video without the Gould brothers.

After finding temporary replacements to fulfil some touring obligations, Mark and Mike set about recruiting a permanent guitarist and drummer to continue the band. They settled on drummer Gary Husband, a performer of 25 years' experience and a well-known jazz musician, and guitarist Alan Murphy, former member of the 1980s band Go West.

The new line-up began 1988 with a new album, Staring At The Sun, and the accompanying tour. The first single from the album was 'Heaven in My Hands', which reached the Top 20, although the other singles from the album — 'Take a Look' and 'Tracie' — did not perform quite as well.

This new phase in the band's career was suddenly and tragically cut short by the death in 1989 of Alan Murphy from an AIDS-related illness. The band withdrew from promotional activities for their latest single, 'Take Care of Yourself', and when their double-platinum greatest hits album Level Best was released in November 1989, it was dedicated to Alan.

In the 1990s, the band continued to work on new material, although Mike and Mark were also busy with solo projects. They invited session guitarist Alan Holdsworth to play on some tracks for their forthcoming album Guaranteed and to play on stage with them during their 1990 - 1991 tour. While the band could clearly still pull in an audience, their record company were less convinced, wanting Guaranteed to have a more obviously commercial sound. The band took the album to the RCA/MG label and it was finally released in 1991. For the 'Guaranteed' tour, Holdsworth was replaced by another session guitarist, Jakko Jakszyk, and the band proved that, whatever was happening in the studio, they were still a great live act. As one researcher puts it:

I actually saw Level 42 at the UEA4 in Norwich as part of the 'Guaranteed' tour. They were fantastic!

A year later, however, the band slimmed down to a duo, as Gary and Jakko left to work on other projects. Mark and Mike carried the band's name forward, recruiting other session musicians and enlisting the help of Phil Gould, who agreed to contribute to their studio work, though not to join them on tour. Mike, Mark and colleagues continued to tour throughout the early 1990s under the 'Level 42' name and also released the band's final album, Forever Now (1993). All three singles from the album — 'Forever Now', 'Love In A Peaceful World' and 'All Over You' — reached the Top 40, with the title track providing the group's last Top 20 hit. At the end of 1994, after one last European tour, Mike and Mark decided that they wanted to move on and work on other projects. Level 42, which had existed for almost 15 years, was no more.

In 2002, Mark decided to reform the band to promote a new greatest hits album, The Ultimate Collection. Although Mike was unavailable, Gary Husband agreed to play drums, and Mark was also joined by younger brother Nathan on guitar, with Lyndon Connah and Sean Freeman — musicians from Mark's solo work — on keyboards and saxophone, respectively. Although this new version of Level 42 didn't last beyond the greatest hits tour, Mark continues to record and tour as a solo artist. The Level 42 name is kept alive by regular CD and DVD releases of live footage and rare recordings from the band's glory years. At the time of writing, Mark and Gary are collaborating on a new Level 42 album, which is to feature contributions from Mike and Boon and may even be accompanied by a tour in 2006. It seems that if Mark has his way, Level 42 may indeed live forever.

1Named after the meaning of life, the universe and everything in The Hitchhiker's Guide to the Galaxy.2Other exponents of this early 1980s phenomenon include Heaven 17, Fashion and Shakatak.3The strings are struck with the side of the thumb and plucked hard with the fingers. The technique is sometimes known as 'slap and pop'.4University of East Anglia.