Foo Fighters - the Band Content from the guide to life, the universe and everything 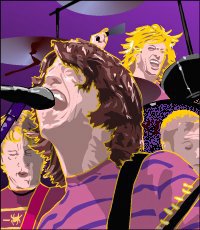 In the early years of the 1990s, the US rock scene was in a state of relative turmoil - for artists and their fans, that is. As usual for the music industry giants, it was simply a time of transition. The posturing 'hair bands' of the 1980s had been rendered irrelevant by the raw, visceral and, above all, emotionally-honest style of grunge. Of all the bands riding the tide of thrift-store fashion and fragile musical angst, the most important were the Seattle trio known as Nirvana.

Held up in the present-day as a band as important in their own time as The Beatles or The Rolling Stones, Nirvana gave a voice to the disillusioned masses of middle-class American youth who, despite the fact they faced no great economic or social hardships in life, still felt a melancholy of the soul. The brittle but powerful music of singer/songwriter Kurt Cobain gave these people a voice of their own. That was until 5 April, 1994, when Cobain penned a vitriolic suicide note, put the barrel of a shotgun into his mouth and joined the ranks of the rock 'n' roll martyrs.

While this deprived countless fans of their icon (and a young family of a husband and father) it also left bassist Krist Novoselic, part-time guitarist Pat Smear (formerly of seminal LA punks The Germs) and the band's sixth drummer, Dave Grohl, at a bit of a loose end creatively. While Novoselic went on to form a far from successful group known as Sweet 75, Grohl had a secret weapon waiting in the wings, the success of which none could have predicted at the time.

Towards the end of the band's lifetime, Grohl had penned a small number of tracks such as the B-side 'Marigold'. But unbeknownst to the musical world at large, he had also been working simultaneously on a set of tracks for a side-project totally independent of Nirvana. Released soon after the demise of Nirvana and with little fanfare, the first album - titled simply Foo Fighters and initially not listing Grohl as the creative force behind it - became an underground hit of great proportions.

The Foo Fighters - the Ever-changing Band

Grohl wrote, played and recorded the entire first Foo Fighters album alone, and the influence of the late Cobain can often be felt in the raw and heavy tracks that dot the album. Despite this, the lighter and more melodic qualities that would characterise Grohl's songwriting on the later albums was present - ensuring that the Foo Fighters had a more accessible sound than Nirvana from the start, a quality that would reward the band in the years to come.

Realising that this one-man band was fine for the studio, but impossible for touring, in trying to promote an album, Grohl recruited the aid of former band-mate Smear on guitar, Nate Mendell on bass and sticksman William Goldsmith. Dave picked up the lead-guitar duties himself and the first incarnation of the Foo Fighters as a fully-fledged band was born.

This original line-up was altered by the time the second album The Colour and The Shape was released in 1996, by the replacement of Goldsmith with Taylor Hawkins behind the drums. Perhaps the most successful album to date, The Colour... saw the band shake off the remnants of grunge and emerge as a viable and vibrant force in the musical mainstream, a feat rarely achieved by a genuine rock band.

There Is Nothing Left to Lose came along three years later in 1999, and featured the talents of Chris Schiffet (late of punk's No Use For a Name) on guitar in place of Pat Smear. Far looser than the previous outings, the album and its singles fared well commercially, the video for 'Learn to Fly' even featured a cameo appearance from comedy rockers Jack Black and Kyle Gass (collectively known as Tenacious D).

The band's fourth album One by One followed in 2002, and saw a slight curve towards a heavier sound as the commercial feel-good tracks were outnumbered by the balls-out rock songs harking back to the first album in sound terms. For once there were no changes in the line-up and four albums into their career The Foo Fighters sounded tighter and more vital than ever.

The Foo Fighters' name was derived from a phrase in the Smokey Stover comic strip1 that ran along the lines of 'Where there's Foo, there's fire', but the actual term 'Foo Fighter' was coined by US Airforce pilots in the Second World War to describe the anomalous balls of light that they saw flying alongside them at high altitudes. As well as naming the band after a form of UFO, Grohl also named the band's second album The Colour and The Shape after the two most common questions asked of a person claiming to have seen an Unidentified Flying Object (for the record, he also named his record label 'Roswell Records').

Well-known for their sense of humour and never a band to take themselves too seriously, the Foos have filmed some of the most genuinely funny promos ever committed to celluloid. The best include:

Ever find yourself in one of those frustrating situations that life seems to throw up every now and then? Then just like the folks in this promo, you need 'Footoes; for a fresher fighter'. In the course of the video, Dave Grohl and various other hapless individuals overcome the obstacles in their paths with a burst of inspiration after partaking of the fictional Footoes candy (a parody of the 'Mintoes' brand). A woman boxed in by a bluff city-type enlists the aid of the Foos to move his car - is the guy mad? No - the woman flashes him a look at her Footoes and he laughs it all off. The band are out jogging when Dave Grohl is stranded on the other side of the street by a stretch limo; after a swift Footoe he climbs into the limo on one side and out the other, stopping only to flash his Footoes at the woman inside. Where would all these people be without Footoes?

Taking place in the strange world of Dave Grohl's dreams, the video for the track 'Everlong' delves into the history of Dave's relationship with his on-screen partner (played by Taylor Hawkins). We see a punk Grohl save the lovely Taylor from the unwanted advances of a pair of sleazy teddy-boys in the shape of Nate Mendell and Pat Smear. Down, but not out, Smear and Mendell reappear in Hawkins' dream and proceed to terrorise him/her there. The valiant Grohl must leave his own dream and enter that of his love in order to save her. He then assembles the band back in the real world in time for the song's big finale.

A video with a definite story, 'Learn to Fly' opens with Jack Black and Kyle Gass (aka Tenacious D) masquerading as a clean-up crew on a commercial airliner. The pair are in fact drug smugglers looking for a place to stash their merchandise. Startled at a crucial moment, the inept duo are forced to hide the contraband in a convenient coffee pot and flee. As the flight commences, the drugs lend a unique property to the java served in transit and chaos ensues. As well as playing themselves, the band also take on various other roles in the video. Highlights include Dave Grohl as an obsessive teenage fan, a camp steward and an obese woman in possibly the world's worst tracksuit.

Appearing on the soundtrack of the Farrelly brothers' film Me, Myself and Irene, the video follows the escapades of Grohl's character as he struggles to impress his date despite the fact that he is a cringeworthy nerd. Taking her to a drive-in movie he endures the humiliation of being flipped the finger by a car-ful of old ladies, having his leg humped by a dog and finding a horde of people hiding in his boot in order to sneak in for free. He finally cracks when he finds another guy hitting on his date. Grabbing the speaker near his car, he metamorphoses into a man fuelled by pure rage and belts out the rest of the song backed by the band, much to the joy of his previously uninterested date.

Skin and Bones (2006)
A live album, what you'd hear at a typical Foo Concert.

1Created by Bill Holman, Smokey Stover became a syndicated strip in 1935 and ran until Holman's death in 1973.