The Roswell Incident Content from the guide to life, the universe and everything 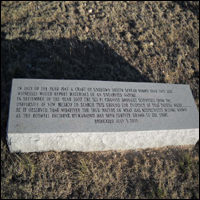 This incident occurred sometime between 4 and 6 July, 1947, in the state of New Mexico, USA.

According to the US Department of Defense, a weather balloon simply crash-landed on a farm near Roswell Air Base. However, not everyone believes this. A rather large group of people believe that the 'weather balloon' was in fact an Unidentified Flying Object (UFO) from outer space. In fact, they believe the military actually recovered three or four alien bodies, and recovered the UFO. What happened to the debris or the bodies has not been conclusively determined.

Mack Brazel, the ranch owner on whose land the crash occurred, found debris from the crash and reported it to the Roswell sheriff, who in turn, reported it to Captain Jesse Marcell at Roswell Air Base. Brazel believed that the crash had resulted from falling parts that had separated from a test aircraft.

Captain Marcell issued a press release stating that the Army had indeed recovered a UFO. But mysteriously, this statement was later retracted. The new official line, according to General Roger Ramsey, was that the incident had involved a weather balloon, and not a UFO, as Marcell had previously stated. Marcell later appeared on a local radio show explaining that he knew all along it was a weather balloon.