Hillbilly - What It Means, When (Not) to Say It Content from the guide to life, the universe and everything 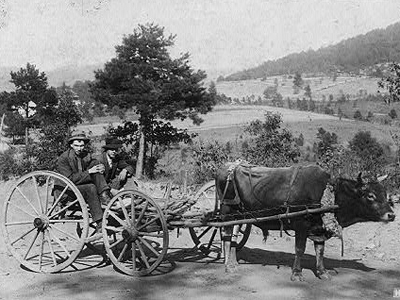 When you call me that, SMILE.
– Owen Wister, The Virginian

What's in a name? A lot, as we know: information, identification, nuance. And, oh, possibly – just possibly – fighting words. Take hillbilly. Is this a term you want to use? If so, when? Where does the word come from, anyway? Is it part of a proud heritage, or a derogatory expression to be avoided?

What Is a Hillbilly?

Strictly speaking, the word 'hillbilly', as used in the US, refers to natives of the southern Appalachian mountain chain1 and the Ozark mountains of Missouri and Arkansas. The term can be derogatory, implying low socio-economic status, cultural backwardness, and lack of education, but it can also be used fondly to invoke the idea of tradition, independence, and home values. The term means one thing when used by insiders, and often quite another when outsiders use it.

We'll talk more about what hillbillies do – and don't do – later, but first, let's deal with the historical issues.

Hillbillies: How They Got There

Like many common terms, the word 'hillbilly' is in dispute. Most who use the term have no idea where it comes from. One theory held in the UK claims that the term comes from Ulster Scots who emigrated to Appalachia in the 18th Century. As these new Americans were Orangemen, so the theory goes, they were called 'Billies'.

There are a number of problems with this theory. One is that the term 'hillbilly' is only attested in print in the 1890s. Although it's probably a bit older than that, at least orally, it's a stretch getting back to the days of early settlement. Another is that there is not a lot of enthusiasm in the Appalachian mountains for William of Orange – not to disappoint, but they've never heard of him, and he's not a folklore motif in Gatlinburg. On the other hand, Robin Hood stories and Jack tales are popular. Whenever the term 'hillbilly' showed up, it's fair to say it had nothing to do with King William – but we can, possibly, give credit to the Scots. The Scots term 'billy' meant 'fellow', so we might say that a 'hillbilly' is a 'fellow from the hills'.

A big problem with trying to tie the hillbillies to the Battle of the Boyne is that not all hillbillies are of Ulster Scots ancestry. They might be named Shreyeck or Lineberger2. The Appalachian mountains were settled by the immigrants who flooded down the Great Wagon Road in their tens of thousands in the 1700s – Scots and Ulster Scots, to be sure, but also, in huge numbers, Germans from Pennsylvania, and even English people. The Great Wagon Road originated as a Native American route. Tribal people gave their permission for the settlers to use this trade route, which ran alongside the mountains, down the Shenandoah Valley of Virginia, and as far south as Georgia.

Immigrants bought their Conestoga wagons in Philadelphia, loaded their families and goods, and headed west along the Pennsylvania Turnpike. At the aptly-named Mechanicsburg, they stopped for repairs and maintenance before heading south through Maryland and into Virginia, where the road forked, one way leading into the mountains and the other away from them, further south into South Carolina and Georgia. If you turned right, you might become a hillbilly.

Once in the mountains, the English/German/Ulster Scot settlers mixed with the indigenous population, made up of numerous native tribes (Shawnee, Cherokee, Delaware, Seneca, Wyandot, Ottawa, Tuscarora, Susquehannock, among others) and mixed-race people, mostly the children of escaped slaves and indentured servants, who were at one time called melungeons3.

The English and Ulster Scots brought their language – a mixture of Northern English and Ulster Scots dialects – their cultural baggage, including a love of border ballads, and an independent approach to life. The Indians taught the others about the local flora and fauna, and how to hunt and fish. Together, they forged a way of life based on subsistence farming in a region that was a paradise of biodiversity and favourable climate.

So what did people call them? In the 18th Century, they called them 'woodsies'. People on the coast thought they were backward, lacking the 'polish' of sophisticated colonial types in Philadelphia, Williamsburg, or Charleston. The woodsies didn't care – they had fresh air and plenty of 'mast', fodder dropped from chestnut trees, for their free-roaming pigs and foraging cattle. They were content.

The Origin of Stereotypes

Time passed – a lot of it, though possibly, less of it up in the Smokies. Geographical isolation added to the general poverty of the post-Civil War South to make the southern Appalachians a place where cultural and linguistic changes came slowly. Appalachian people were known to talk differently and react differently from other people in the US. The shortness of historical memory meant that few, if any, knew that these differences were mostly artefacts of an older age.

Take the hillbilly stereotype. An outsider artist, like Connecticut 'humorist' Al Capp, who wanted to make fun of Appalachian people, drew them wearing shapeless felt hats, barefoot, in rags, and smoking corncob pipes. Even the women. Especially the women, which made sophisticated city folk look down on them. Where did Mr Capp get these notions?

In the 18th Century, everyone in the Colonies wore a felt hat. Uptown types rolled the brims of their hats4 into tricornes. Macaronis added a jaunty feather. Practical farmers let the brims hang down, as the Lord intended.

Going barefoot saved shoes. Mountain people dressed simply and practically, and had little cash for fashion. The pipe-smoking business, also, was a throwback to the 18th Century, when everyone smoked clay pipes. In the mountains, no pipe clay: pipes were made of corncobs. President Andrew Jackson's wife Rachel, who was from Tennessee, scandalised Washington society by smoking her pipe. Mountain women were independent, and mountain society was more egalitarian. The 19th Century saw a shift away from pipe-smoking nationwide: as many European observers complained, US men 'chewed'. Spittoons were ubiquitous5. As mountain people adopted smokeless tobacco use, the practise became gendered: men 'chewed', while ladies 'dipped'. Well into the second half of the 20th Century, Southern mountain women used powdered dipping snuff, which was placed between the lower lip and the teeth. The resultant 'juice' was expectorated into a recycled coffee can.

Cartoonists like Al Capp, and filmmakers looking for a cheap laugh, used these cultural differences to create derisory stereotypes. People familiar with life in the mountains looked upon these oddities more fondly. Few outsiders took this way of living seriously, until the music business became interested.

Like other cultural forms, music was preserved in a slow-time envelope in the Appalachians. Border ballads continued to be sung, augmented by songs in the same style celebrating more recent events6. Traditional instruments such as the fiddle, and later the piano, were joined by the banjo and, after the Spanish American War of the 1890s, the guitar, brought home by returning soldiers. Homemade instruments of all kinds were added to the mix – the jug, the washboard, spoons, a 'bass fiddle' made of a tub, a broomstick, and a string, perhaps a tissue-paper comb. The favoured singing style was 'high lonesome', a kind of nasal wail familiar to fans of Irish folk music.

Ah, folk music. The folk revivalists of the early 20th Century discovered the Appalachians. They came to listen, transcribe, and record. Mountaineers were suspicious at first. Researchers who proved harmless were allowed to stay. They returned to their universities and wrote erudite papers about the 100th version of 'Barb'ry Allen' they found over in Lost Creek or Butcher Holler.

The music industry paid attention, putting out records of 'hillbilly music' like this cheery tune from Vernon Dalhart and Carson Robison in 1927. During World War II, hillbilly music gained in popularity. In the 1940s, war correspondent Ernie Pyle lamented the spread of this music, complaining that 'even the dogs were howling' Pistol-Packin' Mama. There was no holding this music back after that – although it was renamed 'country music', and turned into a massive industry.

So It's All Right to Say 'Hillbilly'?

Well, yes and no. Appalachian mountain people are proud of their heritage. They often use the term 'hillbilly' among themselves – after all, it points to a shared history, and distinguishes them from other Southerners, who are Flatlanders. On the other hand, they will be, quite rightly, offended by an outsider who uses this term in an obviously pejorative way.

Another note: 'hillbilly' is not the same as 'redneck'. 'Redneck' is a term which is always used pejoratively, and is always offensive, no matter how many 'humorists' use it in jokes. The redneck of comedy is not usually from the mountains, and is not necessarily a Southerner. The term is used to refer slightingly to poor white people who live in rural parts of the US and lack education, opportunity, or the job skills to enter the middle class. As such, the term smacks of economic elitism. Attempts to 'reclaim' the term 'redneck' have met with indifferent success, but a reading of Jim Goad's provocative book The Redneck Manifesto might clear up a few errors of historical perspective.

In the meantime, to appreciate what real hillbillies are about, try visiting the websites of Appalachian Studies departments at select universities:

Photo supplied by the Library of Congress

1The Appalachian mountains stretch as far north as the Southern Tier of New York. No one in Pennsylvania or New York refers to those mountain dwellers as 'hillbillies'. Hillbillies begin in West Virginia, although they traditionally refer to themselves as 'mountaineers', and claim that Tennesseans are the hillbillies.2They might also be named Carpenter, but don't let that fool you. In North Carolina, the Carpenters used to be named Zimmermann. The name was translated from German.3In the racist climate of the 19th Century, melungeons claimed to be 'Portuguese', and Appalachian people with Native American ancestry called themselves 'black Dutch'. It was safer to lay claim to Europeans than Africans, and after a while, genealogies got a bit muddied. Whole settlements in West Virginia only recently discovered their Indian ancestors, who had hidden in 'white' anonymity from the forced relocation of 1830.4All fashionable people folded their hats back then, especially pirates.5As observers noted, spittoons were everywhere, but often missed. Floor cleaning was a full-time job in US public buildings throughout the 19th Century.6'More recent' is a relative term. The songs might be discussing events of the Revolutionary War.