Great Moments in Music History: 'Oh! Susanna' Premieres at the Eagle Ice Cream Saloon Content from the guide to life, the universe and everything 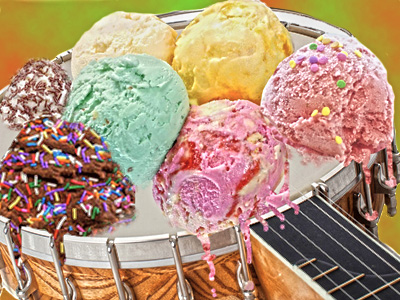 Of 'Minstrels' and Other Social Embarrassments

Foster was a well-brought-up young man from Pittsburgh, Pennsylvania. His family didn't quite know what to do with him, though: he came home from college after only a month, because he was homesick. He didn't really want to do anything useful, like buckle down to his job as an accountant in his brother's steamship business in Cincinnati. What he wanted to do was write music. Serious ballads, you understand: Foster had studied with Henry Kleber, a German-born Pittsburgh composer and impresario. But to get an audience for his music, Foster needed a hit. So while he was wool-gathering over the profit-and-loss figures in 1846, Stephen was also composing minstrel tunes to try and break into showbiz.

What, you ask, was a minstrel song? You mean, like, troubadours? Alas, no. The pop music business in the 1840s was all about a kind of music that is deeply humiliating to composers, performers, and modern audiences alike. And it's all the fault of Thomas Dartmouth Rice (1808-1860), a New Yorker from a tough neighbourhood on the Lower East Side. 'Daddy' Rice, as the tall singer/dancer came to be known, started a popular trend by blackening his face with burnt cork and doing a song-and-dance number called 'Jump Jim Crow'. Did US (and British) audiences respond by shouting, 'Stop that! You're adding insult to injury for an ethnic group that deserves our support, not our mockery!'? No, of course they didn't. They showed up in droves to laugh and applaud, and demanded more of this kind of thing.

By the mid-1840s, a composer couldn't get a hit to save his or her life1 without throwing in references to 'Ole Massa', the 'Sunny South', and a cotton boll or two. Singers and dancers put on 'blackface' and performed the songs on stages in every city and town, and on riverboats – the same ones Stephen's brother was busy selling passenger tickets and freight space on.

We also need to point out that actual experience with Southern agriculture, African Americans' lives, or the appalling system of slavery was not a requirement for coming up with these amusing ditties. Foster only went South once – on his honeymoon in 1852. The happy couple took one of his brother's steamboats down to New Orleans. By then, the show people were already singing Foster's plantation songs, like 'Massa's in de Cold, Cold Ground'.

So Stephen, determined to 'pay his dues', scribbled down minstrel tunes and distributed them in the hopes of escaping a life of addition and subtraction. He sent one to his more sympathetic brother, Morrison, who wrote about this early success:

While he was in Cincinnati, in 1847, he sent to me at my suggestion a song called 'Way Down South Whar de Corn Grows', to be entered for a prize at an exhibition in Pittsburgh. The audience gave the applause and the approval to Stephen's song, but the prize, as usual, went to one of the troupe, for a vulgar plagiarism without any music or poetry in it. The next day, whilst I was in the United States Court taking out a copyright for Stephen's song, one of the troupe who had sung it appeared and asked for a copyright in his own name for the very same song. I informed Judge Irwin of the fraud, and the baffled rogue was glad to be allowed to depart unpunished.
– Morrison Foster, My Brother Stephen, Privately printed, 1932, p.37.

Why an Ice Cream Saloon?

Ice cream was trendy in the mid-1840s. The ice cream making machine had just been invented. Dairy farmers had lots of milk to unload. Ladies out for a good time wanted Temperance (no alcohol), and men out looking for a good place to take their lady friends wanted Class (to impress). The result? The ornate ice cream saloon, where you could buy cake, candies, and ices. Entertainment upstairs. (Nice entertainment, no strippers.) Cover charge: 10 cents. (We are not making this up.)

To drum up more business, the impresario, one Nelson Kneass by name, staged an early form of 'X-Factor': local acts performed, applause decided the winners, prizes were awarded. That's why Morrison Foster felt that Stephen's corn song had been cheated out of its prize. (Kneass was the 'baffled rogue' Morrison was talking about.) Stephen's next number, sung on 11 September, 1847, was a real winner. 'Oh! Susanna' laid 'em out in the aisles. The resulting sheet music run sold 100,000 copies – akin to a gold record. And in the next two years, nobody heading West for the California Gold Rush could avoid hearing the song, which echoed from every covered wagon. That's how popular 'Oh! Susanna' was.

Heady stuff, this hit. But what did it sound like? Well, basically like something with lyrics by Monty Python, enunciated over a plunky banjo. Judge for yourself2:

I come from Alabama with my Banjo on my knee
I'm goin' to Louisiana my true love for to see.
It rained all night the day I left, the weather it was dry;
The sun so hot I froze to death – Susanna, don't you cry.

Chorus: Oh! Susanna, don't you cry for me;
I come from Alabama, with my Banjo on my knee.

Is this better or worse than 'Heartbreak Hotel'? Or 'A Hard Day's Night'? It depends on your musical taste, we suppose. But 'Oh! Susanna' launched Foster's musical career, and gave us such hits as 'Beautiful Dreamer'. So the moment on Wood Street in 'downtown' Pittsburgh, 11 September, 1847, was a paradigm shifter, so there.

And 'Oh! Susanna' is a hit that will not die. Check out this grrrl power version of the old song, and see if you don't feel like heading West. (Or at least clapping along.) 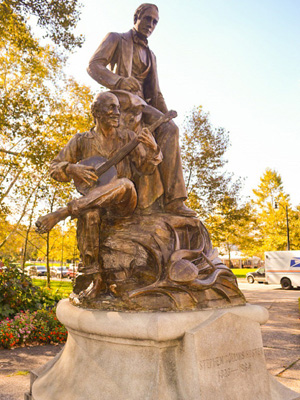 1Fanny J Crosby, the author of over 9,000 hymns, many of them well-beloved in evangelical churches, wrote lyrics for minstrel songs for composer George F Root. To her credit, Ms Crosby refused to use dialect and never praised slavery, as she was an ardent Abolitionist. For his part, Root – who later composed 'The Battle-Cry of Freedom' – was so chagrined to be writing minstrel songs he hid under the pseudonym of 'Georg Friedrich Wurzel'. ('Wurzel' is German for 'Root'.)2You will notice that there is an extra verse in this version that you have (probably, hopefully) never heard in your life. Foster had the grace to be extremely uncomfortable about the verse. We include it here for your historical edification, and hope that you will never, ever, hear it sung in public.