The American Beatles Albums: The 1964 Albums Content from the guide to life, the universe and everything 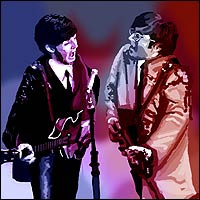 Their hits, according to the Billboard chart, were:

If that wasn't enough, other hits in the chart included The Carefree's 'We Love You Beatles' at number 42 and The Four Preps' hit 'A Letter To The Beatles' at number 85. Alan Livingstone, President of Capitol Records in the 1960s, has described the event by saying:

The album's cover consisted of a collage of photographs taken when they were on their first American tour, including some from the famous Ed Sullivan show. The sleeve notes fortunately simply read: Electrifying big-beat performances by England's Paul McCartney, John Lennon, George Harrison and Ringo Starr on the front, and Never before has show business seen and heard anything like them. And Here They Are! The World's most popular foursome singing and playing their new collection of hits. on the back. It was released in America on 10 April, just a week after the Beatles set their chart record. The Beatles' Second Album was also a number one seller.

The Beatles' Second Album consisted of the five songs left off Meet The Beatles!: 'Please Mister Postman', 'Roll Over Beethoven', 'You Really Got A Hold On Me', 'Devil In Her Heart' and 'Money'. 'Long Tall Sally' and 'I Call Your Name' were later released in the UK on the Long Tall Sally EP on 19 June, 1964, and did not appear on a UK album until Past Masters: Volume 1. 'She Loves You' as a single had been declined by Capitol, and instead was released by the smaller Swan label, a record company from Philadelphia. Capitol, trying to make up for their earlier mistake, placed it as the closing track on The Beatles Second Album, even though it did not appear on a UK album until 1966's A Collection Of Beatles Oldies as it, along with its B-side 'I'll Get You', had appeared as a single in August 1963. 'Thank You Girl' had been the B-Side to 'From Me To You' in the UK. However, in America, 'From Me To You' had been the B-Side to 'Please Please Me' on its January 1964 release4. 'You Can't Do That' appeared on the UK's A Hard Day's Night album, and had been the B-side to 'Can't Buy Me Love', a song which appeared on both versions of the A Hard Day's Night album, having appeared in the A Hard Day's Night film.

A Something Hard New Day's Night

A Hard Day's Night was not only the third UK Beatles album, but was also the Beatles first film5, following in the footsteps of Sir Cliff Richard and Elvis Presley, other musicians who had appeared in musical films. Negotiations for the film had begun in October 1963, with the Beatles contracted to write seven songs for the soundtrack before the script had been drafted. 'A Hard Day's Night' was the last song to have been written for the film, which went through several title changes until the song was written. The song was based on a quote from Ringo, who described the development of the title in 1964 by saying:

I came up with the phrase 'A Hard Day's Night'. It just came out. We went to do a job and we worked all day and then we happened to work all night. I came out, still thinking it was day, and said 'It's been a hard day'...looked around and saw that it was dark, and added '...'s night.'

One of the songs written for the album, 'I'll Cry Instead', was also changed at the last minute for 'Can't Buy Me Love', which had proved a successful single, in order to help appeal to Beatles fans. A Hard Day's Night was also the first Beatles album in the UK to consist entirely of Lennon-McCartney compositions, however the American version was completely different. Only the seven songs in the film and 'I'll Cry Instead' were featured on the American version, which was released by United Artists, the company behind the film, and not Capitol Records6. The other four tracks were George Martin instrumental orchestral versions of the Beatles songs, taken from the film's soundtrack. The album made number one on both sides of the Atlantic.

Far from being the Something New the title promised, it was in fact something that was being sold the month before in a new package. It was one of the major examples of two albums released in America when the one distributed in the UK had sufficed. However, A Hard Day's Night had not been released by Capitol Records, and once again they wished to cash in. Yet again their strategy of exploiting the Beatles in order to make money failed to beat their rivals, with Something New failing to get to number one, peaking instead at number two in the album chart. This didn't stop the inevitable sleeve note declaring:

Here is the third great Beatles album for Capitol. And needless to say it's wonderful in the very special and exclusively marvelous Beatles way! Here are the latest, greatest new Beatles hits the boys have come up with since their first two phenomenal Capitol albums...

'Slow Down' and 'Matchbox' had been originally released on the UK's Long Tall Sally EP in June. 'Komm Gib Mir Deine Hand' was perhaps a curious choice to end the album with. It was, of course, 'I Want To Hold Your Hand' sung in German, recorded in an attempt to break the West German market8, and not intended for release in the English-speaking world. In the UK, it was only finally released as a curio on the Past Masters: Volume One album of 1988. It seems to have been included at the end of Something New merely to be an album filler, a practice of which the Beatles themselves strongly disapproved. However, the sleeve notes dutifully describe it as:

One of the most popular [Beatles hits] is 'Komm, Gib Mir Deine Hand', the German-language version the boys made of their sensation Capitol hit, 'I Want To Hold Your Hand'.

Considering the song is in German on an album released in America, a nation which tends not to speak German as its national language, it seems an odd way of describing the song. But then it was one of the few songs on Something New not to have been released on the United Artists' A Hard Day's Night album the month before.

On the same day as the release of Something New, 20 July, 1964, Capitol Records released two singles from the album. Both of these singles consisted of tracks that had been on United Artist's A Hard Day's Night album that had been released the previous month. The first single, 'And I Love Her', with 'If I Fell' as the B-side, just missed out on the top ten, getting to number 12 in the Billboard chart. The second, 'I'll Cry Instead', with 'I'm Happy Just To Dance With You' as the B-side, did not even make the top 20, attaining number 22 in the Cashbox and 25 in the Billboard charts. Capitol Records' belated attempt to saturate the market with Beatles songs that United Artists had released a month earlier had failed. Surprisingly, Capitol Records tried the same tactic of releasing two already-available songs as singles that had been on their Something New album. On 24 August, 1964, a month after their album became available, Capitol Records released 'Matchbox', a Beatles cover9 of a Carl Perkins song that the Beatles had performed since 1960. This single had 'Slow Down' as the B-side. Unsurprisingly, it failed to have much of a chart impact, peaking at 17.

The next Beatles album to be released in America, in November 1964, was The Beatles' Story, a two-disc album composed mainly of interviews with the Beatles themselves. The album was billed as:

A Narrative and musical biography of Beatlemania on 2 Long-Play records. Includes selections from their hit records, interviews with the Beatles and their fans, many new photos, their whole story on record from beginning to fabulous fame!

It also contained extracts from the following Beatles songs:

The version of 'Twist And Shout' on the record was recorded live, and not in a studio.

The album was written and narrated by John Babcock, Al Wiman and Roger Christian of KWFb Radio, Hollywood, who also produced it with Gary Usher. It reached number seven in the charts.

1A subsidiary of Vee Jay.2After the two Introducing The Beatles albums and Meet The Beatles!3Although it could be considered to be an accurate reflection of the intelligence of Capitol Records' marketing department, which had passed on the first four Beatles singles and the Please Please Me album.4'From Me To You' with 'Thank You Girl' had been released in America in May 1963 by the small Vee Jay label, where it reached 116th in the charts, although it was later re-released to more success in 1964.5George Harrison met his first wife Pattie Boyd, who played one of the schoolgirls on the train, on the very first day of shooting, 2 March, 1964. They later married on 21 January, 1966.6Although the 'A Hard Day's Night' single released on 13 July, 1964, was issued by Capitol Records. It was number one in America for two weeks in August.7'Any Time At All', 'Things We Said', 'I'll Cry Instead', and 'When I Get Home'. The song 'You Can't Do That' had appeared on The Second Beatles' Album and 'I'll Be Back' later appeared on Beatles '65.8This was also a recognition of their experience gained when performing in Hamburg.9Another version of this song is available on the Live At The BBC album.