RF Stevens Ltd - Folding Organ Specialists Content from the guide to life, the universe and everything 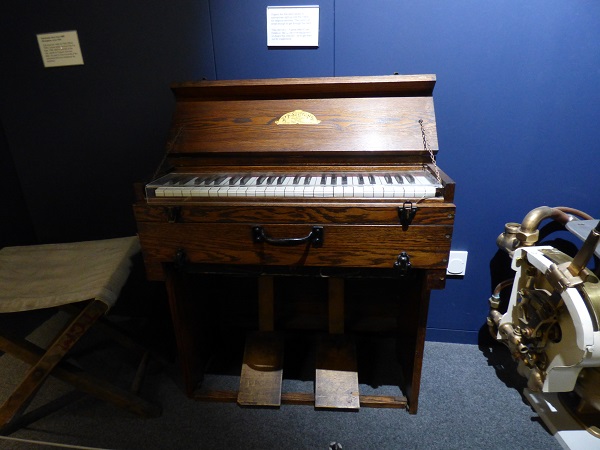 RF Stevens Ltd was a company that manufactured musical instruments including Reed Organs and Harmoniums. Although the firm was not known for producing the best quality items, it became relatively well known for a time thanks to securing a contract with the Royal Navy to supply small organs to ships in the fleet (including submarines) for their on-board religious services.

When you hear the word 'Organ' in connection with musical instruments, your first thought might be of Pipe Organs, those large, powerful instruments generally found in churches, early cinemas and concert halls1. However, there are more-portable instruments that are also known as organs.

Reed Organs work by having reeds (two thin strips close together like in an oboe) rather than pipes - when air is pumped past the (metal) reeds, sound is produced2. In the 19th Century the Harmonium was developed - a compact reed organ similar in size to an upright piano. The Melodeon3 or American Organ improved on the sound quality of Harmoniums by introducing a suction mechanism to draw air past the reeds - this gave the instrument a more pipe-organ-like sound. These instruments were superseded by the Electric Organ in the mid-20th Century.

RF Stevens Ltd was established in London in 1853 by Richard Stevens. The firm produced a large number of Harmoniums, but was also interested in more innovative offerings such as transposing keyboards (to enable players to change the musical key of a tune without changing the notes they were playing) and small Harmoniums that would fit underneath a piano so that both instruments could be played simultaneously by one player.

Another innovation was the Folding Organ. This had a lid that could be closed to protect the keyboard, and in many types the keyboard could then be folded down on to the pedals to form a suitcase-like box with a carrying handle. The instrument could then be transported more easily and safely with less risk of damaging important components. RF Stevens Ltd produced a number of Folding Organs for the Salvation Army and went on to secure a contract to supply organs to the Royal Navy during the Second World War. These Folding Organs had to be robust enough to withstand variations in temperature as well as the stresses of being moved around on sea-going vessels, so after the war similarly robust instruments were made for export around the world.

Other types of organ made by RF Stevens Ltd in the mid-20th Century included 'Student's Pedal Organs' - these had electric pumps, unlike the older instruments that required the player to pump the air past the reeds with their feet, so pedals as well as keyboards could be played, making them more like pipe organs.

RF Stevens Ltd stopped making organs in 1966 but continued operating as a company offering repair, maintenance and restoration of older organs until it was finally closed in 1978. Some of their organs may still be in use in places such as small churches as well as in private homes. RF Stevens Reed Organs and Harmoniums can often be found for sale online - on specialist websites and also on eBay. An example of their work can even be found in the Royal Navy Submarine Museum, Gosport, UK - it is a Folding Organ that was small enough to fit through the hatch of a submarine.

1When hand-pumped organs were able to be replaced by organs with 'electro-pneumatic action', more began being installed in private residences and even on yachts.2This technology is also used in smaller instruments such as harmonicas and accordions.3'Melodeon' is also the name given to a type of accordion with buttons (instead of piano-like keys) that play a different note depending on whether the bellows are being pulled apart or squeezed together.