The Salvation Army Content from the guide to life, the universe and everything 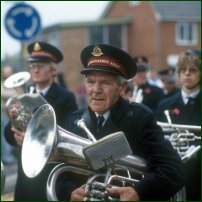 The Salvation Army is an internationalist Protestant Christian denomination. Its members are properly known as Salvationists, though around the world they have many nicknames, such as 'Sally Ann' in the UK, 'Salvos' in Australia and 'Sallies' in New Zealand.

Salvationists have been labelled as 'killjoys' because of their teetotalism, their anti-gambling stance and, most recently, by The Sun newspaper, because they wouldn't stock the paper (due to its titillating Page Three content), in their shops that serve the British armed forces in Germany. However, they would probably prefer to be seen as aiding (in Christ's name) those who are dependent on drugs and alcohol, and as standing against the commercial exploitation of female sexuality.

It is generally accepted that the Salvation Army began in 1865 in London's East End, though it wasn't known by that name until much later. Its founder (a Methodist minister called William Booth) didn't actually start out to form a new denomination. At the time, Victorian England was the world's major industrial and military power, and officially a Christian nation. Yet large numbers of the working classes had almost no contact with any of the churches. Booth's intention was that his 'Christian Revival Association', (later 'East London Christian Mission', yet later simply 'The Christian Mission', and finally in 1878, 'The Salvation Army') should target, and convert these 'churchless' people and bring them back into the churches. While he succeeded in gaining large numbers of converts, many of these reformed characters found it difficult to integrate into, or be accepted by, the existing churches, and instead kept coming back to Booth's meetings, which had a distinctive style that they preferred.

The Salvation Army spread rapidly, first within Britain, then internationally. Currently it has a presence in 111 countries. This internationalism helps to explain why despite its quasi-military style, it has such a strong pacifist tradition. (Through World Wars I and II it remained active in both Britain and Germany). However, its 'Red Shield' sections provide welfare services and volunteer canteens to military personnel in peacetime and in war – often close to the frontline.

Salvationists have campaigned against social injustice on many fronts. A joint campaign with WT Stead's Pall Mall Gazette against child prostitution led to legislation in 1885 which raised the age of consent from 13 to 16. In 1891, the Salvation Army opened its own match factory in order to pressurise Bryant and May (one of the last remaining match manufacturers using the hazardous yellow phosphorous) into abandoning its use in favour of the safer red phosphorous.

Although Salvationists consider themselves principally a church, to many they are best known for their welfare and charity work. The range of their social programmes has varied over the years in different parts of the world, but has included soup kitchens, children's homes, hospitals and maternity homes, homeless hostels, drug/alcohol rehabilitation programmes, tracing missing persons, employment exchanges, emigration services, prison-visiting, women's shelters, leper colonies, disaster relief, to name but a few.

In many countries, this social provision is on a scale second only to the government. However, many Salvationists are involved in worship and evangelical activities only, and may have no direct connection with these social/charity programmes at all.

The other thing that Salvationists are well known for is the importance they place upon music, particularly their brass bands, some of which are rather good.

They also have choirs, known as 'songster brigades', and have had several popular music groups, the most successful of which were the Joy Strings in the 1960s.

There are three different categories of Salvationists: officers, soldiers, and adherents. Officers, the equivalent of ministers in other denominations, hold quasi-military ranks from Lieutenant up to Commissioner, and are under the command of the General of the Salvation Army. Soldiers, the equivalent of confirmed or baptised church members, wear uniform and make personal commitments on joining (such as abstention from alcohol) by signing the Army's 'Articles of War'. Adherents are those who adopt the Salvation Army as their church, but who do not make the same personal commitments as soldiers. The Commissioners periodically meet as the 'High Council', in order to elect the next General.

The commitment expected of Officers is absolute. They may only be married to another Officer if they want to keep their status as Officer. They can expect a basic wage and may be 'posted' almost anywhere in the world. If they leave the 'work' before retirement age, they will forfeit their pension.

Salvationists call their churches 'Corps', though some of their older buildings are called 'Forts' or 'Citadels'. These are organised regionally in 'Divisions', and internationally into 'Territories'.

Salvationists base their beliefs on the New Testament teachings of Jesus. Their formal statement of doctrine would be unremarkable for the majority of Protestant churches, and contains little that even the Pope would disagree with. However, most of the things that make Salvationists distinctive cannot be derived or explained simply from these beliefs.

Their robust anti-alcohol position, for example, is well known. Although it can be explained by reference to Booth's Methodist background, and, in particular, by considering that many of his converts had previously suffered from alcohol problems, it is not mentioned anywhere in their statement of doctrine.

Other distinctive practices that are not specifically part of the doctrinal statement are the quasi-military structure and embellishments, the abandonment of the sacraments of Holy Communion and Baptism, and the more or less equal role played by women as ministers.

Women ministers are now common in many Protestant churches, but before Booth appointed women as Officers (following the example of his feminist wife Catherine), it had been completely unheard of.

Even today, the Salvation Army is unusual in having been led not once, but three times, by women1.

While Salvationists have had progressive attitudes on many subjects, they remain very conservative regarding matters such as same-sex marriage, pornography, homosexuality and neo-paganism. This has caused difficulties in some cases where the Salvation Army has undertaken programmes with government financing, particularly in the United States, and has come under pressure to run these programmes in accordance with equality legislation, and the principle of separation of state and religion.

Salvationists are readily recognised by their semi-military uniform. The precise style varies in different territories and according to rank, etc. However, there is usually a distinctive cap (or bonnet), as well as the initial 'S' for 'Salvation' on the collar or lapels. The initial varies depending on the local language - so that in Germany it is an 'H', and in Russia it is a Cyrillic 'C'.

They are also known for their flags. These show a yellow eight-pointed Sun (emblazoned with the motto 'Blood and Fire') on a crimson background with a dark blue border.

The Salvation Army has had frequent references made to it by popular culture. Notable works include George Bernard Shaw's Major Barbara, Frank Loesser's musical Guys and Dolls, and Vachel Lindsay's poem General William Booth Enters into Heaven, which was later orchestrated by Charles Ives.

In popular music the Salvation Army has appeared both as an incidental motif (as in Life in a Northern Town by The Dream Academy or Leonard Cohen's Suzanne), and as the central theme (such as Long Live Love by Olivia Newton-John, and Bannerman by Blue Mink). The Beatles hit Strawberry Fields Forever, was inspired by the Salvation Army-run children's home of the same name.

There have been myriad cameo appearances in television and film, as well as the sitcom Hallelujah, starring Thora Hird.

'With heart to God, and hand to man', is a slogan which the Salvation Army has used recently to describe itself. In summary, while Salvationists may seem like killjoys on many issues, they are generally more likely to want to help than to say 'I-told-you-so' if it all goes horribly wrong.

1On each occasion, however, these women remained unmarried. If they had been married, it would normally have been their male spouses that would have been promoted.