'General' William Booth (1829 - 1912), Evangelist Content from the guide to life, the universe and everything 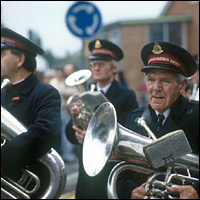 O boundless salvation! Deep ocean of love,
O fullness of mercy, Christ brought from above.
The whole world redeeming, so rich and so free,
Now flowing for all men, come, roll over me.
- O Boundless Salvation! (The Founder's Song)

On 28 August, 1912 William Booth's funeral procession left the International Headquarters of the Salvation Army, the organisation he had founded - as the Christian Revival Association - 47 years earlier. As it moved off, 10,000 uniformed 'soldiers' fell into step behind and 40 massed brass bands played the 'Dead March' from Handel's Saul. 'General' William Booth was laid to rest in Abney Park Cemetery, Stoke Newington.

William Booth was born in Sneinton, Nottingham in 1829, the only surviving son of Samuel Booth and Mary Moss. His father was a builder and, by the standards of the time, the family were initially well off. However, during William's childhood his father's investments collapsed, and the family fell into poverty. Thus, at 13 years of age, William was apprenticed to a pawnbroker in order to assist in supporting his mother and sisters. That same year, his father died. He did not have a particularly religious upbringing, just the normal church attendance of the Victorian Age, but at 15 years of age he experienced a conversion:

'Around 11 o'clock one night in 1844, trudging home from a meeting through unpaved streets, a sudden spiritual exaltation flooded my whole being. I saw with unmistakable clarity that I must renounce all sin.'

Booth now started to read widely and voraciously, and he became a Methodist lay preacher. In 1848 he completed his apprenticeship and gladly left the pawnbroker's, wearied by the unending procession of broken customers. However, 12 months later he was obliged to seek employment, and like so many others he turned to the capital to seek his path to prosperity. The only work available to him was in his trade, and he took both a job and accommodation in a pawnbroker's shop in Walworth. He hated the work because it showed him the way poverty brought humiliation and desperation to the people beset by it, and he felt that by participating in his profession he was helping to further it. He continued as a lay preacher, but became disenchanted by the few opportunities he received, and resigned his position. Instead, he took to evangelising on the streets and commons of London.

By the middle of the 19th Century England was mainly an industrial nation. The city populations had swelled enormously but the parishes of the churches were still organised along their old lines. Most city dwellers grew up outside the ministership of the church. Methodists, with their simpler and more direct doctrine, succeeded in reaching some of this population, but many more were untouched by God. By 1852 the young Booth was out of pawnbroking and held the position of Minister in the Methodist Reform Church in Clapham. He became engaged to Catherine Mumford that same year, and in 1855 they married. Their honeymoon was a typical Booth undertaking: one week together at Ryde on the Isle of Wight, followed by a revivalist tour of Guernsey. A year later, they opened the Christian Revival Association in the East End of London. Already, Booth was working among the most desperate members of society - alcoholics, prostitutes and the destitute. His evangelism was mixed with practicality, opening soup kitchens to feed the hungry and working alongside other prominent campaigners like William T Stead and Thomas Barnardo.

Slowly the mission grew, but the work was far from easy. Catherine desribed how 'he would stumble home night after night haggard with fatigue, often his clothes were torn and bloody bandages swathed his head where a stone had struck'. His evening meetings, which were held in a warehouse, would regularly be interrupted by youths throwing stones and fireworks through the windows. It should be remembered that at this time there were more than 500 charitable and religious groups at work in the East End of London. His fledgling organisation grew despite the situation, and it was renamed the Christian Mission. New sections were opened in Croydon and Bromley, and by 1877 there were 26 flourishing stations.

Booth continued to innovate, and eschewed the traditional organ for tambourines and fiddles, writing fresh, Christian, lyrics for popular music hall songs. When people complained of his use of 'popular' music his response was typically robust:

Secular music, do you say, belongs to the devil? Does it? Well, if it did I would plunder him for it, for he has no right to a single note of the whole seven!'

Mottoes and exhortations flowed from him constantly. 'Go for souls and go for the worst!' - this was a motto intended to encourage his ministers to bring redemption where other organisations feared to set foot. At a meeting in 1877, George Scott Railton1 expressed a dislike for the Mission being referred to as a volunteer army. Booth picked up his pen and struck out the word 'volunteer' and replaced it with 'salvation', and an institution was born.

Suddenly, the imagination of the people was caught: war with Russia was expected imminently and the martial theme was familiar. An army fighting sin needed a uniform, and Elijah Cadman, who at the age of six had started work as a chimney sweep2, devised one. The ever-practical Booth insisted on headgear - the familiar Army bonnets and caps were originally included to protect the wearers from missiles and blows. Cadman, who had also been a prizefighter, was the first man to refer to Booth as 'General'. The Army motif grew, with 'drumhead' conversions, and people kneeling before the bass drum to swear allegiance, prior to following the band back to the Citadel3. A flag was designed by Captain William Ebden, and the very first one was presented to the Commanding Officer of Coventry City Corps, Captain Mrs C Reynolds, by Catherine Booth in 1878. Everyday members were called soldiers, and various ranks such as recruiting sergeant were available. Officers were the leaders, with ranks ranging from Captain to General.

Booth did not pour all his energies into his church, though. Catherine and William had eight children4, all of whom were devoted to their father. He also continued to read widely and was a keen observer of the wider world. Booth became a vegetarian and credited his diet with giving him the strength to maintain his vigorous lifestyle.

Initially William was against women preaching, but after his wife rose and spoke at a meeting he was persuaded, and the Salvation Army was at the forefront of women's liberation. Indeed, Booth once remarked 'My best men are women'5. This was not popular in some circles and Lord Shaftesbury, a strong politician and evangelist, described Booth as the Antichrist, with one of the main accusations levelled at him being he 'elevated women to a man's status.' The Salvation Army was also a strong supporter of the temperance movement and all 'soldiers' foreswore alcohol and tobacco.

Many readers will be familiar with the old children's rhyme:

Up and down the City Road
In and Out The Eagle
That's the way the money goes,
Pop goes the weasel!

However, fewer will be aware that this relates to the Eagle Tavern in London and the alcoholics who frequented it. Men so desperate for a drink they would pop their weasel (pawn their watch or coat). Ironically, the temperance movement was so successful they put this legendary drinking house out of business, and the Salvation Army bought it and turned it into a rehabilitation centre6. By 1879, Booth commanded 81 stations manned by 127 full-time evangelists, and 51 new stations were opened in 1878 alone. In 1880 the Salvation Army opened fire in the US, shortly followed by France, India and Australia.

By 1888 Catherine was suffering with cancer, and she was 'promoted to Glory' on 4 October, 1890. At the time of his greatest loss Booth's book, In Darkest England, And The Way Out7 was published. This set out his ideas for improving the lot of the poor, and his plans for social reform8. The book compared the living conditions of the poor of England, with the humblest citizens of the dark continent, and detailed what Christians needed to do to rescue the destitute.

It is worth looking at some of the figures from the book. Booth claimed there were 51,000 paupers in London (a pauper was defined as one in a workhouse or asylum); 17,000 of these he claimed inhabited the East End of London. Of homeless he set the figure at 33,000 - again, a third were in the East End. The starving9 numbered 300,000, while the very poor10 came to 222,000, with both these categories having one third of their total in the East End. In other words, from a population of roughly 4,700,000, one sixth were living at, or below, poverty levels.

In 1891, The Salvation Army opened a match factory in Old Ford, East London, paying double the rates of Bryant and May, and using the safer red phosphorous. Over the next ten years a missing persons bureau was established along with a labour bureau, a farm colony, labour yards, and an immigration service. Booth was a seasoned traveller and visited nearly every country in the world. In 1904, Booth was invited to meet King Edward VII at Buckingham Palace, and the following year he was granted the freedom of the City of London.

In 1909 his right eye was removed after he lost the sight from it. This did not stop him campaigning in the Netherlands, Switzerland, Germany, Denmark and Italy the following year. His final public speaking was at London's Albert Hall on 12 May, 1912 where he addressed 7,000 salvationists. On 20 August he too was 'promoted to Glory', and his son Bramwell became General to succeed him.

Booth's body lay in state for three days at Clapton Congress Hall; 150,000 people passed his casket. His funeral was held at London's Olympia and 40,000 people attended, including, sat at the back, almost unrecognisable, Queen Mary. From the poverty of his Nottingham adolescence Booth had established an Army fighting poverty in the name of Jesus - an army that still exists today, in virtually every country of the globe. In the UK, it is the largest provider of social care outside the Government.

If you would like to read more about this incredible man, his wife, his life, his indominatable spirit, and the Army he formed, then Roy Hattersley's book Blood and Fire11 (Abacus, 2000) should be enough to satisfy most readers.

1General Secretary to the Christian Mission, and later the man who took the message to the US.2A familiar street cry was 'small boys, for narrow flues.'3As Army churches were called.4Bramwell, Ballington, Kate, Emma, Herbert, Marie, Evangeline and Lucy.5The Army has twice been led by a woman, possibly unique amongst world religions.6It was later pulled down in 1901.7Generally considered to have been 'edited' by William Stead.8The book was most recently reprinted in 2006.9Those who earned less than 18s, equvalent to 90p.10Those who earned 18s to 21s per week, equivalent to a range of 90p to £1.05p.11ISBN13 9780349112817