The Hammond/Leslie Feud: A Musical Fight with Organ Accompaniment Content from the guide to life, the universe and everything 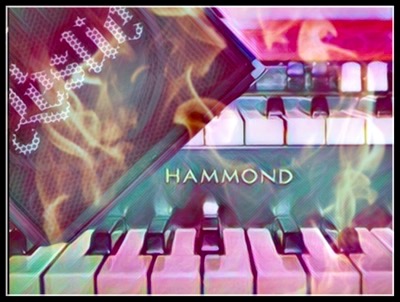 Quick Quiz: What's the connection between a guided missile, a police siren, and Procol Harum's 1967 hit 'A Whiter Shade of Pale'?

Answer: contained in the story below.

A scene from the 1940s: an employee of the Hammond Organ Company furtively slips a friend some money.

'Please order a speaker from Electro Music,' he asks. 'But whatever you do, don't let anybody know it's for me!'

'But why?' demands the puzzled friend.

'Because if my boss catches me buying a Leslie speaker for my Hammond organ, I might get fired!' is the anxious reply.

The story of the feud between Laurens Hammond, the tone-deaf organ manufacturer, and Don Leslie, the sound engineer who turned the Doppler Effect into a music revolution, is both instructive and hugely entertaining, so we will tell it.

Somewhere in between inventing the electric card-dealing bridge table and designing guided missile systems for the US military, Cornell-educated engineer Laurens Hammond came up with the electric organ that bears his name. This was in 1935, and he mainly did it to save his electric clock business from going bankrupt in the Great Depression. Hammond wasn't musical, unlike his sister, a renowned cellist. He couldn't carry a tune in a bucket. On the other hand, he knew quite a lot about the synthetic production of sound. Hammond worked on the engineering problem. He also hired his staff – even his typist – on the basis of their ability to play the organ, as a check on his own faulty ears.

Hammond exhibited his organ with great flair, advertising that the first sale had been to composer George Gershwin, the second to Sigmund Romberg, and so on, with a stellar clientèle list. Henry Ford bought six. Sales teams hauled Hammond organs around the country, demonstrating them in churches, theatres, even skating rinks – but never in bars. The Hammond organ was a respectable instrument.

Pipe organ manufacturers objected strenuously to the term 'organ' when applied to Hammond's instrument. There were no pipes. This Hammond thing used 'tone wheels' to generate musical frequencies. Different effects were achieved through modulation using drawbars (calibrated pull-out sliding bars) – and those effects were not 'infinite', as Hammond claimed. All right, conceded Hammond, the effects were not 'infinite'. There were only about 253 million of them. He changed his advertising, but staged a blind demonstration test in which experts failed to identify the difference between a pipe organ and one of his instruments. So the name 'organ' stuck.

Hammond cheated, however: for his demonstration, he located the Hammond instrument in the University of Chicago chapel. In a hall with superior acoustics, the Hammond organ sounded fine. But in a house? Not so rich. Hammond couldn't really hear the difference – but another engineer could, and it bothered him. Don Leslie was going to do something about it.

Don Leslie serviced radios for the Barker Brothers Department Store in Los Angeles, California. He also worked part-time for a while for the Hammond Company, installing new generators for Hammond organs in homes. When the Edison electric company switched its Los Angeles service from 50 to 60 cycles in 1936, it caused home organs to play at a higher pitch. Installing the new generators was a lucrative opportunity for Leslie, and it brought him into contact with Hammond organs. Leslie pondered the problem of improving the sound.

One day in the late 1930s, Leslie observed a truck driving down his street. The truck had mounted speakers, and broadcast a political message. As the truck passed his house, Leslie noticed the change in pitch – the well-known Doppler Effect also observable in police sirens. This gave Leslie an idea, and he went to a radio store and picked up a cheap speaker.

Leslie mounted a horn-shaped speaker on a turntable, creating a moving audio field. The rotation used the Doppler Effect to, er, great effect. As Patent Application #23323 put it:

... the rotation of the sound channel is such as to cause the mouth, which receives the tone from the source, to move toward and away from the source. In either case, the pitch of the sound heard by the listener is alternately increased and decreased.
- Don Leslie, 'Rotatable Tremulant Sound', patent filed 9 July, 1945.

Hooked up to a Hammond organ, the Leslie speaker produced a much warmer quality of sound. Everyone who heard the difference wanted one of these speakers, and production began in 1940. At first, they were referred to as 'Hollywood speakers', because they came from Los Angeles. Leslie marketed them under the name Vibratone for a time, but finally gave up and called them what everyone else called them: Leslies. Organists were delighted.

Laurens Hammond was not.

There is no Reason, and the Truth is Plain to See (and Hear)

Leslie wanted to sell his business to the Hammond Organ Company, but Hammond wasn't having any. Hammond instructed his salesmen to tell people they didn't need Leslies, because Hammond's own vibrato system was superior. This was a lie: Hammond's built-in system was nothing like a Leslie. Customers blithely bought Hammond organs – then went down the street and bought a Leslie to hook up to the organ. Everybody was happy except Hammond. His company tried to reproduce the Leslie effects with their own devices, but never really nailed the sound.

The feud between the two companies was interesting. At trade fairs, Leslie-friendly Hammond employees would invite Don Leslie to visit their display, where he would sometimes be recognised and ejected from the room by Hammond loyalists. Hammond dealers couldn't stock Leslies in their showrooms, but would whisper instructions to their customers on where to acquire the speakers elsewhere. Organ-playing Hammond employees attached Leslies to their own organs, but nobody talked about this.

Paradoxically, the relationship between the two feuding engineers and their companies was truly symbiotic. Hammond organ buyers bought Leslies – and Leslie never had to advertise. His products flew off the shelves, and his only problem was keeping up with demand. In turn, Leslies made Hammonds sound much better. And so it went.

In 1957, the Hammond Organ Company put out a feeler to buy Leslie out. He chuckled, and told them they were 17 years too late. After all, there were only so many insults an engineer should have to put up with.

Although Their Eyes Were Open, They Might Just as Well've Been Closed

In 1966, a Hammond manager placed a call to CBS, wanting to buy some Leslie speakers. The switchboard directed the call to Don Leslie, who was hugely amused by the Hammond manager's chagrin at being found talking to the 'enemy'. When the embarrassed manager admitted that Hammond wanted to buy some of 'your speaker units', Leslie replied, 'Why don't you say, "we want to buy your Leslie speaker units"1?' Revenge is sweet.

In 1980, several years after the founder's death, the Hammond Corporation bought Electro Music from CBS – and acquired the brand name 'Leslie' to go with it. These days, the whole business is part of Hammond-Suzuki USA.

Both Don Leslie and Laurens Hammond were inducted into the American Music Conference Hall of Fame in 2003. The electric feud has been settled – at least, as far as grateful musicians everywhere are concerned. All is reconciled in music heaven.

Sixteen Vestal Virgins and Other Beneficiaries of the Leslie Speaker

Home music enthusiasts and skating-rink organists aren't the only ones who love Leslies. Thanks to the Leslie, the Hammond B3 organ made rock music history in the 1960s. You've heard the story, now listen to the hit: 'A Whiter Shade of Pale' can be enjoyed via Youtube. No apologies at all to JS Bach, the organ showoff who might have appreciated having his own Leslie.

A Hammond with Leslie is also the perfect instrument for rocking the classic 'Light My Fire', another forward-thinking tune with a classical bent.

Leslies aren't only good for organs. While Steppenwolf's 'Born to Be Wild' makes use of the 'traditional' Leslie organ effect, other musicians of the creative 60s plugged other instruments into their speakers. George Harrison used a guitar-with-Leslie for 'Lucy in the Sky with Diamonds'. John Lennon used the Leslie to filter his vocals in 'Tomorrow Never Knows'. Don Leslie's speakers did so much more than warm up the sound in your living room: they became part of a musical revolution.

Do you long for the ancient days of radio and tea dances? You might be pleased to know that the first song ever recorded on a Hammond organ using a Leslie speaker was 'Tea for Two'.

Want to know more about the history of the Hammond B3, and hear some stellar players? We recommend this short documentary. Be sure to notice Ethel Smith, the flamboyant organist from Pittsburgh, Pennsylvania. She rocks that Hammond in those high heels.