Keep on the Sunny Side - Singing Away the Great Depression Content from the guide to life, the universe and everything 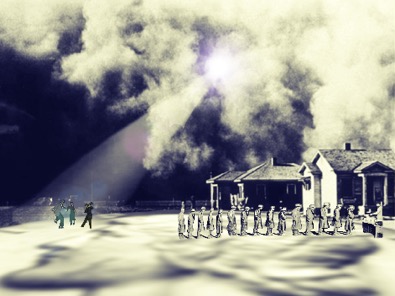 The 1930s were a time that tried people's souls. In 1929, the bottom fell out of the stock market. Around the world, economic disaster followed. In the United States, there was no work. To compound the problem, the Midwest was struck by an ecological disaster decades in the making: the Dust Bowl. Years of digging up the prairie, along with horrendous overcultivation by desperate farmers trying to pay off greedy bankers and railroad managers, yielded a bitter harvest when a prolonged drought that hit the Midwest stirred up clouds of dust that choked land and people alike, bringing environmental chaos and economic ruin to the region. Those barely getting by stopped getting by at all. Many moved West to an unwelcoming California – you may have read about them in books by Nobel prizewinner John Steinbeck, such as The Grapes of Wrath or Of Mice and Men.

In the cities, things were not better. Starving people lined up at soup kitchens, or begged from passersby. The expression, 'Brother, can you spare a dime1?' became so common that songwriter Yip Harburg wrote a song with that title.

They used to tell me I was building a dream
With peace and glory ahead
Why should I be standing in line
Just waiting for bread?
– Yip Harburg, Brother, Can You Spare a Dime? (1930)

Yes, the Republicans wanted to suppress this 'Commie' song when it was sung on Broadway. Yes, Yip Harburg was Jewish and leftist. And yes, the melody was based on a Russian Jewish lullaby. So what else is new? Howling in protest was one way to respond to the inequities of the Great Depression2. Another way was to poke bitter fun at all the suffering. What follows is a true story.

In the late 1950s, a woman wanted to share her impressive collection of records from the 1930s and 1940s with her sister's small children.
'This was a big hit,' she said. 'You'll like it. It's funny and has a good beat.'
The children listened... and broke out into loud sobs.
'What's the matter?' the woman asked, puzzled.
'It's so sad!' the children bawled. The woman looked at her sister, baffled. Her sister rolled her eyes.
'You don't get kids, do you?'
The song she'd played was One Meatball.

Now, neither the lady in question nor her sensitive young relatives knew it, but One Meatball, a jazzy number that cocked a snook at the Depression, was really just an updated version of an old Harvard college staple, The Lone Fish-Ball, written in the 19th Century by a far-from-stuffy Latin professor3. In its original form, the song about a diner in pecuniary embarrassment was closer to Four and Nine, a popular Irish folk song. But One Meatball takes on new significance in the Thirties. Context, as they say, is everything.

In the Appalachian mountains, the suffering was acute. They could 'make do' about clothes, of course: wear clothing made of flour and feed sacks, save their shoes for going to town or church, and do without luxuries. But even people who grew their own food often went to bed hungry. What follows is a comment by a Depression survivor.

The successful engineer, a decorated veteran of World War II, sometimes spoke of his teen years in terms of struggle.
'It was tough,' he said. 'I was growing, and there were a lot of us, and there wasn't always enough to eat. And I worked hard in the fields all day. I can remember working out there, and having hunger pains, and they hurt so much... it's a terrible kind of pain when you're growing.'

A later generation listened, and sympathised, and finally understood the popularity of 'all you can eat' restaurants. But how did people keep up their spirits, if all they had to sing were doleful dirges and smarmy college songs about meatballs? Was there anything bright on the musical front? There was, of course, as anyone knows who's seen the Coen Brothers' Depression fantasy film O Brother, Where Art Thou?4 could tell you. The song is Keep on the Sunny Side, and it was originally sung in church.

Keep on the Sunny Side

Ms Blenkhorn (1858-1927) began writing hymns in 1892. There wasn't a lot of fame and fortune associated with it, but people found her songs encouraging. One day a lady said to her, 'May some soul be converted through a hymn that you shall write, who would not be converted if you do not write it!' Ada felt that she had to keep it up after that. Even men in jails were singing her songs, and it did them a world of good, apparently.

One reason Ada Blenkhorn's songs were so encouraging was that her favourite theme seems to be sunshine. Some of her titles are:

And, of course, Keep on the Sunny Side.

Songwriters have to get their inspiration from somewhere. This song was inspired by Ada's disabled nephew, a little boy who always wanted his wheelchair pushed on the 'sunny side of the street.' The song cheered up the Carter Family5, too: the famous country singers recorded it in 1928, and it became an anthem for the Great Depression as well as their signature tune. How popular was it? Well, Carter Family patriarch AP Carter's tombstone has a gold record embedded in it: you guessed it, Keep on the Sunny Side.

Well there's a dark and a troubled side of life.
There's a bright and a sunny side too.
But if you meet with the darkness and strife,
The sunny side we also may view.

Did these people have no sense of reality? Were they in hopeless denial? In a word, no. Ada Blenkhorn's weather-related songs include When the Sky Is Overcast, and the even more ominous When the Storm Tossed Waves Are Rolling. But she follows them up with When the Sun Shines Brightest. She seems to have agreed with another hymnwriter, the sometime-institutionalised and often tortured 18th-century genius William Cowper:

Ye fearful saints, fresh courage take;
The clouds ye so much dread
Are big with mercy and shall break
In blessings on your head.
– William Cowper, God Moves in a Mysterious Way

William Cowper knew about bad emotional weather: he was frequently suicidal. According to Cowper, a cab ride he took to The Thames, intending to jump in, ended with his arrival at low tide, which he took as a sign from God to cut it out6. It is clear that Cowper firmly believed that the Almighty could manage tides and weather, and did. Ada Blenkhorn and her many fans were encouraged with the idea that:

Tho' the storm in its fury break today,
Crushing hopes that we cherished so dear;
Storm and cloud will in time pass away,
The sun again will shine bright and clear.

And that's what got some people through the Great Depression.

1A dime = ten cents.2You can hear the song here and judge its effect for yourself. Even on a jaded audience.3George Martin Lane, whose Göttingen dissertation was entitled Smyrnaeorum Res Gestae et Antiquitates. It's available online, and is probably exciting reading.4Story by Homer, of Odyssey fame. There is a classical theme to the Depression.5One member of the Carter Family, June Carter, became even better known as the wife of Johnny Cash.6Pretty generally, Cowper got the impression that the Deity was determined to prevent his multiple suicide attempts, as something always went wrong. The laudanum he tried to overdose on knocked him out before he could partake further. A knife broke, as did the rope he tried to hang himself with. His fans are grateful, because he only wrote his most famous song, There Is a Fountain, later in life. Cowper was regarded as one of the greatest poets of his generation.