The Flour Sack: Depression Fashion Tip Content from the guide to life, the universe and everything

No matter what you saw in the movies, during the 1930s, most people were poor. This was true everywhere, even in the developed democracies of North America and Western Europe. People had little money, and they learned to 'make do' – stretch their pennies, cook simple meals, and above all, make their clothing last. In the early 21st Century, the average Westerner has 88 items of clothing in the closet. (Somebody counted.) In the Great Depression, a middle class person had 15. Poor people could keep their entire wardrobe on one nail. (Yeah, the one you hang that old cardigan on.) But they still wanted to be presentable, and they found ways to do this.

In cities, of course, there were second-hand shops. Fanny Brice famously sang about Second-Hand Rose. But in small towns and out in the countryside? You had to sew. Correction: women had to sew, mostly. But where to get the material? Cloth cost money, and money they did not have.

Enter that godsend, the flour or feed sack. A generation was clothed by Pillsbury and Purina. Our parents and grandparents went to school decently dressed, got educations, secured economic recovery, and defeated Hitler – all thanks to the interaction of commerce and human creativity. Let's take a look. Let the fashion parade begin. 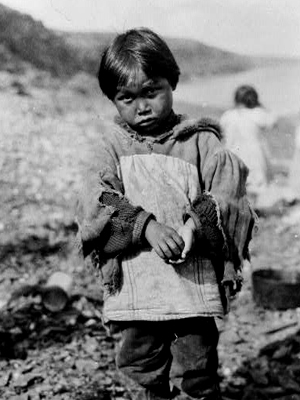 this Canadian Inuit boy is wearing an outfit made of plain, unadorned, but sturdy burlap sacks. He'll stay warm, fair enough. But it's hardly interesting to look at – nobody will envy him. In fact, he may excite pity. And that's not what we're talking about.

Take a look at these dresses. 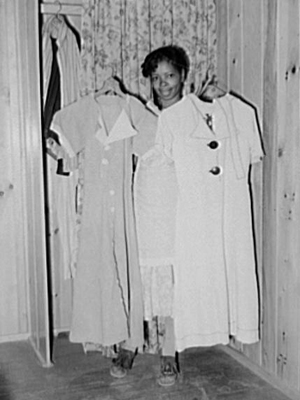 Now, you'd pay for something like that. This woman proudly showed off her handiwork to the Farm Security Administration, a US government agency. That's a creative way to use the fairly plain flour sack, although obviously, they came in more than one colour, and the material was a finer weave than burlap. We wonder if she did her grocery shopping with that in mind... we suspect she did. 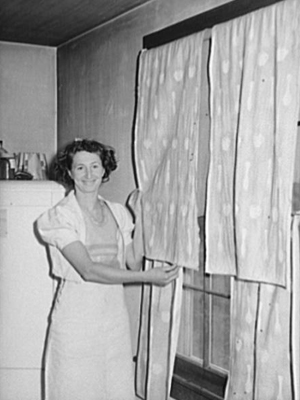 This woman is not only well-dressed, but she has fancy curtains. And it got even easier once the companies caught on and started printing the cotton sacks with floral patterns.

Flour and feed sack clothing might be humble, but it need not be unimaginative or unattractive.

It Pays to Advertise

Of course, flour and feed sacks carried identifying marks. However, advertising logos on clothing weren't as much the fashion in the 1930s as now – they hadn't heard of the Hard Rock Café or Tommy Hilfiger. So most people removed the labels. At first, this process was a bit laborious, involving soaking in kerosene or rubbing with unsalted lard, then washing with lye soap, etc. In 1933, the Textile Bag Manufacturers Association published Sewing with Cotton Bags, with instructions for removing labels. By the end of the 1930s, the companies had caught on and made the labels water-soluble. This was not only less work, but safer: kerosene was volatile.

For undergarments, it hardly seemed worth the effort to remove labels, since no one would see them. (This was a more modest time, and didn't involve Madonna.) The result made for interesting memories.

As an anonymous poet recalled from her childhood:

One pair of panties beat them all
For it had a scene I still recall;
Chickens were eating wheat
Right across my little seat.
– Quote by Fay Aldritch in The Curator, April 2005.

The Economics of Flour Sacks

In the thrifty Thirties, people used those feed and flour bags for every purpose imaginable. The cloth bags served as cleaning cloths, insulation, storage containers. They were stuffed and used for pillows, or pieced together for quilts to keep out the cold. Used as sacks, they could double as 'Irish luggage'. For potential buyers, a nice weave or pattern would be a selling point for the commodity involved. Customer-hungry companies – and there were about 30 of them in the US alone – began to take notice and respond. The 'Wayne Chick Starter', a kind of chicken feed, advertised with a picture of a little girl in a flowered dress and the claim of 'Each bag a 50-cent value in cloth'.

Sack manufacturers turned out colourful prints. By the end of the decade, artists were even being employed to design new prints. Women awaited the new motifs eagerly. They traded with one another to match or vary designs. Pattern makers sniffed the winds of change, and started selling instructions for dresses and shirts.

Feed and flour sacks came in 100-pound bags made of cotton gingham or percale. In the cash-poor Thirties, they represented real value. Picking the side stitching out of a bag – there was no bottom seam – yielded a 36- by 44-inch piece of cloth, a little more than a yard of fabric. Three yards of material would make a woman's dress1. At Sears prices, the same amount of gingham cost 40 cents, and percale a whopping 60 cents. The poorest tailors sewed their clothes by hand, but most used sewing machines. For those in areas without electrification, the treadle machine continued to do yeoman's service.

Schoolchildren enjoyed their new duds. After all, they were just as well-dressed as the kids from the next farm. And teachers enjoyed the fact that they could usually identify siblings by the shared fabric patterns. Even farmer husbands got into the act: one farmer's wife praised her husband:

We had two big chicken houses and used 14 sacks of feed every week. My husband got most of the sacks. He always tried to get two or three of the same pattern so we would have enough to make something. He did a pretty good job of picking them out2.

Printed sacks changed the way people thought about a trip to the feed mill. One woman remembered:

I can remember the excitement I felt on Saturday mornings when I was allowed to go to the feed mill with my dad. While we were waiting for the grinding to be completed, I'd look at feed sacks and dream about a new dress3.

The woman who said that was voted 'best dressed' in her sixth-grade class. Her mother was proud: she was a poor girl from the country, and the school was in town. Skill won out over poverty.

In the area of flour sack clothing, special mention should be made of Belgium. During World War I, the US sent 697,116,000 pounds of flour to that country as relief aid. The Belgians, who have a history of talented textile workers, created some amazing embroidery on the bags. To show their gratitude, they sent a sampling of these embroidered sacks to Herbert Hoover, because he was the head of the US Food Administration at the time. A special exhibit of these embroidered flour sacks can be seen online.

Photos courtesy of the Library of Congress

1Modern instructions claim more is needed. Modern instructions aren't written with thrifty and inventive sewers in mind. Modern patterns are sometimes wasteful.2Quoted in Margaret Powell, 'From Feed Sack to Clothes Rack: The Use of Commodity Textile Bags in American Households from 1890 – 1960', Textile Society of America Symposium Proceedings, 2012.3A Pennsylvanian woman, quoted in Rita J Adrosko, 'The Fashion's in the Bag: Recycling feed, flour and sugar sacks during the middle decades of the 20th Century', Textile Society of America Proceedings, 1992.