Dolly Parton - Singer/Songwriter Content from the guide to life, the universe and everything 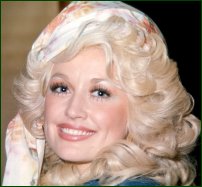 Dolly Rebecca Parton was born on 19 January, 1946, in Locust Ridge, Tennessee, to Robert Lee Parton and Avie Lee Parton (née Owens). From these humble roots, she has become an actress, one of the greatest Country and Western singer/songwriters of all time (if not the greatest), and an international superstar. She was one of 12 children and she has five sisters and six brothers, some of whom have also made their living in the entertainment industry. Her impoverished, yet cherished, childhood and her Christian faith have provided much inspiration for her song-writing, producing 'Coat of Many Colours' and 'God's Colouring Book' respectively.

Parton is particularly well known for her glamorous, glittery image, and although she is naturally pretty and well formed, she is not averse to plastic surgery and other methods to keep her looking 'the best that she can'. It is reported that she has had breast enhancements and a facelift, skin peels, botox and collagen treatments. As she once said in an interview, 'I will never graduate from collagen'.

Having appeared on Knoxville television at 12 years old, and recording for a small label at 13, Parton got her first major break while struggling as a songwriter and living with her uncle, Bill Owens, in Nashville. She came to the attention of Porter Wagner, who at the time had a successful television variety show. She became Wagner's featured duet partner on the show, which led to a recording contract with RCA in 1967. Her first single was one such duet with Wagner, which made the top ten in the country radio charts and started off a six-year period of top ten singles for Parton.

Although her career was stable and quite successful, she had not yet achieved superstar status. However, this began to change in 1974 with her number one single 'Jolene', and in 1977 she had her first major hit with 'Here You Come Again'. A full list of her songs proved too extensive to put here - however you can find a definitive list here.

Three of Dolly Parton's recent albums (Halos and Horns, Little Sparrow, and The Grass is Blue1) draw heavily on her bluegrass roots and have more harmonised vocals than her previous work. Since Halos and Horns she has released several 'greatest hits' albums, as well as recordings of her live show, albums of acoustic songs and cover versions, and For God and Country, a collection of religious country songs.

After further musical success in 1980, she made her acting debut opposite Jane Fonda, Lily Tomlin, and Dabney Coleman in the hit revenge comedy 9 to 5. She received an Oscar nomination for Best Original Song, as composer of the title song. As in most of her subsequent acting endeavours, Parton essentially played herself and her performance in this film earned her other film roles, (a list of which is included below) and even a television variety show of her own, although that was somewhat short-lived.

Currently she heads a hundred-million dollar media empire - Dolly Parton Enterprises. In 1986, this company opened Dollywood, a theme-park which celebrated her upbringing in Tennessee. She continues song-writing, performing and appearing on chat-shows to the present day. Recently she has written songs for other artists, such as 'I Will Always Love You' which was performed by Whitney Houston, and featured in the film The Bodyguard, which Parton originally performed herself in the film The Best Little Whorehouse In Texas.

It costs a lot of money to look this cheap.

If you talk bad about country music, it's like saying bad things about my momma. Them's fightin' words.

Get off the cross, someone else needs the wood.

I do have big tits. Always had 'em-pushed 'em up, whacked 'em around. Why not make fun of 'em? I've made a fortune with 'em.

Plastic surgeons are always making mountains out of molehills.

I modelled my looks on the town tramp.

1These albums were also released as a boxed set in 2006.