'20,000 Leagues Under the Sea' - a Novel by Jules Verne Content from the guide to life, the universe and everything 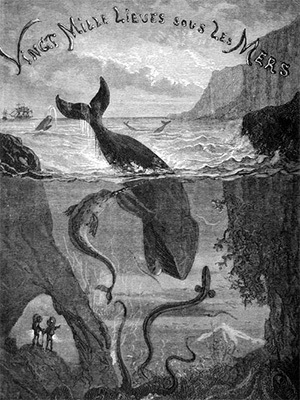 20,000 Leagues Under the Sea is a novel by Jules Verne published in 1870 under the title Vingt mille lieues sous les mers: Tour du monde sous-marin (literally '20,000 leagues under the seas: tour of the world underwater'). Jules Gabriel Verne (1825-1905) was French, and was born in Nantes. His other best-known books are Voyage to the Centre of the Earth (1864) and Around the World in 80 Days (1873), as translated from the French.

Like Around the World in 80 Days, 20,000 Leagues Under the Sea is essentially a travelogue - 20,000 leagues1 (about 48,000 miles or 78,000km) is the distance the protagonists travel around the world, not (as some may have thought) the maximum depth that they reach (which, Verne states, is a mere four leagues or 16,000 yards). To avoid the inevitable monotony some sub-stories are introduced.

Firstly, the main characters in the novel are as follows:

The main story begins in November 1867 near Japan after Monsieur Aronnax has been washed overboard along with Ned Land - Conseil jumps in after his master, and they find refuge on a steel island, which turns out to be the Nautilus. They are taken inside, and held prisoner, although they are given food and clothes2. Captain Nemo is familiar with Monsieur Aronnax's work, so he gives them the ultimatum that he will allow them to live, and move around inside the submarine, as long as they never leave him. Aronnax accepts on behalf of himself and his companions without consulting them, much to Ned Land's dismay. Ned Land and Conseil share a cabin, but Aronnax is given the cabin that adjoins Nemo's.

When the Nautilus reaches the Island of Crespo, the four go on a diving expedition, wearing suits similar to SCUBA gear. Aronnax notes that he doesn't feel hungry while he is out of the submarine, but he does feel sleepy - they all have a nap under the water for a few hours. Mild excitement ensues when they are at risk of running out of air - they ascend quite quickly, but not fast enough to cause 'internal lesions', so all is well.

By January 1868, they have travelled 5,250 leagues under the sea (which is 11,340 miles according to the novel). When the Nautilus gets stuck in the Torres Straits, Nemo has to wait a few days for the high tide to lift the submarine off the rocks. In the meantime he allows Aronnax and his companions to go ashore on an island in Papua New Guinea. They find and eat breadfruit, but they also spend time shooting at the rarest Birds of Paradise and killing kangaroos and rabbits. Ned Land contemplates desertion, but then the island's natives appear and make 'hostile demonstrations' so the group return to the Nautilus.

In the Red Sea, the Suez Canal is in the process of being constructed, but the lack of a man-made route is no barrier to the Nautilus - Captain Nemo simply uses the 'Arabian Tunnel' he discovered, which leads into the Mediterranean Sea. There he visits his secret stash of gold. The Nautilus enters water that is boiling because of underwater volcanoes near the island of Santorini, and even takes a trip to Atlantis.

Southern whales are encountered, and Ned Land is keen to harpoon them, but Captain Nemo does not allow it as it would be 'killing for killing's sake'. However, Nemo has no such scruples towards 'mischievous' cachalots (sperm whales) - he kills so many in one session, using the Nautilus as a weapon, that even Ned Land is horrified.

On 21 March, 1868, Captain Nemo reaches the South Pole and claims it for his own, planting his flag there. However, the Nautilus becomes stuck under an iceberg and the submarine's air supply almost runs out. They escape thanks to boiling water, and then resume their travels until they encounter 'poulps' or giant squid. Nemo decides to 'slaughter this vermin'. Some time later, off the south west coast of England, he encounters a ship of unspecified nationality and destroys it in revenge: 'Through him I have lost all that I loved, cherished and venerated - country, wife, children, father and mother.'

The story of Captain Nemo and the Nautilus ends off the coast of Norway after a journey of 20,000 leagues in nine months - Aronnax, Conseil and Ned Land escape and live to tell the tale.

How do we consider the book as a whole? There are a number of techniques used to create an impression that the tale is true:

This all helps the reader to 'suspend disbelief' when the more imaginative concepts are introduced. For example, Nemo's use of electricity is far in advance of the technology that was available at the time, but Verne's descriptions of things like guns that fire pellets 'in which the electricity is forced to a very high tension' seem less implausible than they otherwise might. And the speed and abilities of the Nautilus foreshadow the developments of real submarines such as the USS Nautilus that was launched in 1954.

In summary 20,000 Leagues Under the Sea is a readable5 book with mild excitement and a poignant conclusion. Surprisingly this Researcher found the book was not readily available in public libraries, but it is available in online stores and in e-book form.

This Entry could conveniently end here, except that a movie of the same name was made in 19546, by Walt Disney Productions7. 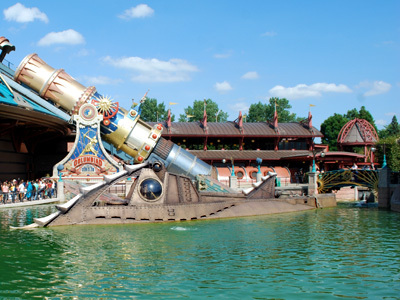 This film version of 20,000 Leagues Under the Sea starred James Mason as Captain Nemo, Kirk Douglas as Ned Land, Paul Lukas as Professor Aronnax and Peter Lorre as Conseil.

James Mason was 45 and little acting was required as he certainly looked the part of the enigmatic Captain Nemo. Aged 39, Kirk Douglas was well cast as Ned Land. At 50, Peter Lorre was rather mature to be playing Conseil as Professor Aronnax's apprentice, but his bemused expression fitted the role. Similarly, at 63 years of age, Paul Lukas was older than Aronnax was in the book, but he had a suitably professorial bearing.

The movie is about 120 minutes long, and proceeds at a much faster pace than the novel it is based on. It follows the book quite closely in places, particularly at the start - for example, the heroes dine on seafood with Nemo and smoke seaweed cigars before going to the Island of Crespo and using the diving suits. The scene set in Papua New Guinea is well recreated, too.

There are several differences to confirm that the story has been 'Disneyfied'. For example, music is introduced - we see Captain Nemo playing Bach's 'Toccata and Fugue' on his organ, but Ned Land is also a musician - he makes a banjo out of bones and a turtle shell and sings 'A Whale of a Tale'. In the film, Nemo has a pet seal - she performs with Ned, clapping along to his singing and giving him kisses. The moral messages are also strengthened. After Ned punches Conseil, and allows Conseil to punch him, they are confirmed friends. Nemo is misanthropic but recognises and rewards people's loyalty to their friends. And when Nemo and the Nautilus are in peril, his crew pledges loyalty to him.

Unusually for Disney, the ending is more downbeat than in the novel8 (in which the fate of Captain Nemo was left to the imagination). Events loosely inspired by Verne's later 1875 novel, The Mysterious Island9 are introduced, so the film ends with the destruction of Nemo10 and his work.

Nevertheless, the movie collected two Academy Awards, namely: Best Art Direction and Best Special Effects. It was also nominated for Best Film Editing, but was unsuccessful in this category. It did not trouble the shortlist for any of the acting-related Oscars.

1There are various measurements that are known as a league - the one that Jules Verne used was the 'lieue de Paris', which measured 4,000 yards or 12,000 pieds de roi (the pied de roi being slightly longer than an Imperial foot).2Conseil and Aronnax had cut each other's clothes off in the water to help them to swim more easily.3Although he only plays the black keys.4Nemo finds the South Pole a mere two-hour walk away from the Nautilus. In fact the geographical pole is found approximately 300 miles (480km) away from the Ross Ice Shelf and would not be visited by humans until 1911.5One reading was sufficient for this Researcher, whereas books like The Count of Monte Cristo reward repeat readings.6There was also a TV movie made in 1997. It introduced Sophie, the daughter of Aronnax, and a love triangle storyline between her, Ned Land and Captain Nemo. The 1916 silent movie of the same name was a similarly loose adaptation, though not as distant as Captain Nemo and the Underwater City (1969).7This was the fifth live action film made by Walt Disney Productions and the first made outside Britain (location filming took place in the Bahamas and Jamaica, and studio filming took place in the USA).8For example, in Disney's The Little Mermaid she lives happily ever after (until the sequel, anyway) but Hans Christian Andersen's original story ending was tragic.9Ray Harryhausen adapted Mysterious Island into a film in 1961, although unable to afford James Mason, Herbert Lom was cast as Captain Nemo instead.10In the 1999 graphic novel by Alan Moore, Nemo fakes his own death on the island and joins the League of Extraordinary Gentlemen.