A Short Break in Paris Content from the guide to life, the universe and everything 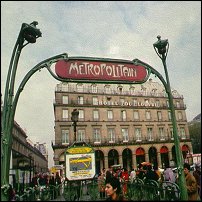 Widely regarded as one of the most romantic cities in the world, steeped in history, a gastronomic paradise, and with the Eiffel Tower and other high-quality tourist venues, Paris makes a wonderful destination for a short break. However, your experience there can be enhanced by making a few simple preparations beforehand.

The quickest, easiest and most pleasant way to get to Paris from England, at least, is by Eurostar train from St Pancras International station, London.

This author went on a four-day break to Paris in February 2009, and while at the Eurostar terminal was advised to purchase a:

While it is possible, and probably desirable, to purchase all of these beforehand on the internet, they are available at the Eurostar terminal; and it is also possible to purchase a carnet on the train.

On the London to Paris route, it is necessary to check in 30 minutes before the departure time (or only ten minutes if you're travelling first class).

The journey from London St Pancras International to Gare du Nord Station, Paris, takes two hours, 15 minutes - only 20 minutes of which is spent actually travelling through the Channel Tunnel.

Eurostar is completely non-smoking and, if you're travelling first class, an airline-style three-course meal is provided, together with complementary alcoholic and non-alcoholic drinks. There is a buffet car available for standard-class passengers, but you can also bring your own food and drinks.

Unfortunately, the use of mobile phones is not banned within the coaches.

On arrival at Gare du Nord, it is a simple matter to access the metro system, which differs from, say, the London Undergound in that it is designed so you can reach any destination with a maximum of two changes.

More detailed information on fares and facilities is available on 'London to Paris by Eurostar'.

With its first line (Line 1) opening in 1900, and now consisting of 380 stations and transporting 6 million passengers per day, the elegant Paris Metro is now the second-busiest in Europe1 and considered a model of efficient public transportation.

From a practical point of view, the Paris Metro consists of 14 lines which are numbered and colour-coded on the metro maps. Interchanges, known as correspondences, are marked as white circles or bands. Lines are also named according to the city gate - or porte - at each end of the line. For example, Line 3 runs between Pont de Levallois to the west and Gallieni to the east.

The trains run from 05.30 to about 12.45 or 01.00. The exact times vary, so you are advised not to push your luck. Exits from the stations are labelled SORTIE in blue.

The card is available for a variety of zones, and for one, two, three or five consecutive days. This author purchased a three-day travel card for zones 1-3. This cost £18.80 for an adult, £9.50 for a child, and allows unlimited use of the metro, bus services, RER trains and the funicular at Montmarte. Possession of this ticket also allows discounted admission to a number of tourist venues. For example, in 2009 it gave a 20% reduction on admission to the Arc de Triomphe and a 50% reduction on admission to the Lido.

For his visit, this Researcher was advised to purchase in addition a carnet of ten tickets for use on any journey on the metro or bus systems. This costs £11.80 (Euro 10.50) compared with a Euro 1.40 single ticket. Thus, a carnet works out at about a third cheaper than single tickets.

Carnet tickets can be used at any time, so unused tickets can be saved for a subsequent visit. In the event, this author did not need to use any of his carnet tickets as the three-day travel card continued to be usable on the fourth day. This must be because the period of validity is counted in hours from the time of purchase.

Once purchased, the two-, three- or four-day Museum Pass not only allows admission to over 60 museums and monuments in Paris, including the Louvre, but enables you to bypass queues at the cash desks.

If using a two-day pass, which is valid for two successive days, it is best to delay its first use until you can get a full day's use from it, thus allowing you to visit more than one attraction in the day.

If you're visiting Paris for the first time, it is well worth taking an open-top bus tour of the city. The company Open Tour operates four different routes around the city. This author took the 'Grand Tour', which costs £26.97, and linked this with a one-hour cruise with commentary down the River Seine, operated by Bateaux Parisien. Starting from the Eiffel Tower, the cruise normally costs 11 euros but is discounted to eight euros when linked with the bus tour.

Although this author purchased travel tickets and the Museum Pass at the Eurostar (St Pancras) terminal, it is possible to purchase all museum, travel and entertainment tickets in advance online - for example on the 'Hello Paris' website.

1The busiest metro in Europe is the Moscow Metro.