The Unusual Life and Mysterious Death of Edgar Allan Poe Content from the guide to life, the universe and everything 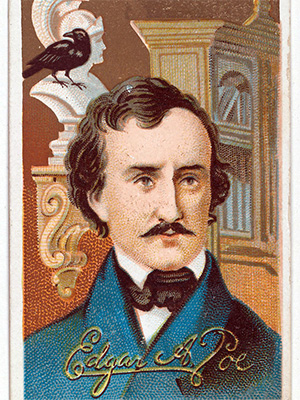 Almost everything you've heard about this man is wrong. He wasn't mad. He wasn't constantly drunk1. His work didn't consist entirely of spooky horror stories and morbid fantasies. He did die under mysterious circumstances, though. His name was Edgar Allan Poe: poet, journalist, editor, and short-story writer, science fiction pioneer and inventor of the modern detective story.

All that we see or seem
Is but a dream within a dream.
- Edgar Allan Poe

Edgar Poe (1809-1849) was born in Boston to two actors. His mother Elizabeth was born in England, while his paternal grandfather came from Ireland. The father abandoned his wife and three children within a year of the baby's birth. Elizabeth, one of the best-known actresses in the United States at the time, died a little more than a year after that of consumption (tuberculosis) in the state of Virginia. The actress's enormous popularity led to an outpouring of sympathy at her early death: the children were quickly adopted by different wealthy families. Edgar was taken in by the Allans in Richmond. He was given the name Edgar Allan Poe, although he was never legally adopted.

Poe's foster mother idolised him. He and his foster father had a more complicated relationship. Allan wanted the boy to be a successful tobacco merchant: Edgar wanted to be the Lord Byron of North America. He wrote poetry on the backs of ledger sheets.

Allan was rich, but stingy. He sent Poe to the University of Richmond, but didn't give the student enough money to live on. Poe gambled to make up the difference, and was forced to burn his furniture to keep warm in the winter. Giving up on university, Poe published a poetry collection with the title Tamerlane and Other Poems, anonymously. It wasn't exactly a bestseller: only 12 copies exist today.

Poe also tried his hand at the military, perhaps in imitation of Byron. His career at West Point, the US national military academy, lasted a whole eight months before he was thrown out for outrageous behaviour. It is possible that Poe, having realised that he was now stuck in an engineering school with uniforms, decided to 'act out' as an honourable means of escape. He was, after all, the son of actors. At any rate, the now-impoverished Poe (Allan died, but left him nothing) turned to his father's relatives in Baltimore – and fell in love, with his cousin, Virginia Clemm.

Poe began his editorial career in Richmond, Virginia, where he moved with his aunt/mother-in-law and his cousin/13-year-old wife. They were happy but poor, and soon moved to Philadelphia and later New York City, where they were happier, but still poor. Poe wrote for a lot of magazines: brilliant articles and short stories that were paid at low rates. In 1845, he published a poem, 'The Raven', which made him famous – it was the equivalent of a hit song in those days. Unfortunately, his wife Virginia died of consumption at the age of 24. Poe was devastated. This loss and the continued struggle to make a living took its toll on his physical and mental health.

Poe wrote essays. He wrote literary criticism. He edited magazines, some of which he started himself, without much success. He wrote psychological horror stories with unreliable narrators. He wrote science fiction. He wrote about clever detectives. He was an accomplished and much-admired poet. He must have had a work ethic that wouldn't quit: his bibliography is impressive for someone who only lived 40 years.

Although his works enjoyed enormous popularity, Poe had enemies in the literary world, partly because of his tendency to be a ruthless literary critic. If he didn't like a book, he not only dissected it savagely, but sometimes cast aspersions upon the character of the author. One of his fiercest enemies was an editor and anthologist2 Rufus Wilmot Griswold. You've never heard of Griswold unless you're a student of Poe, but in his day, he wielded a certain amount of power in the burgeoning US literary scene. He's also the villain of the story for Poe scholars, as you shall see.

While the angels, all pallid and wan,
Uprising, unveiling, affirm
That the play is the tragedy, 'Man',
And its hero the Conqueror Worm.
- Edgar Allan Poe

In 1849, widower Poe became engaged to Elmira Royster Shelton, an old flame who was now also widowed. He planned to marry her in Richmond as soon as he got back from a business trip. But something happened in Baltimore: nobody is completely sure what it was. The writer disappeared for five days. He was found in a bar in a building that was being used as a polling place for an election – bars used to be open on election days back then, and voters, all male, of course, used to be treated to free drinks by candidates. Voting drunk explained a lot of US politics in the 19th Century. Whether Poe had been drinking remains unclear, but he wasn't in good shape. An editor acquaintance took him to hospital. Poe died on 7 October, 1849, of unknown causes.

That's when Griswold went to work. Griswold had a grudge against Poe. A few days after his death, Griswold published an obituary that began:

EDGAR ALLAN POE is dead. He died in Baltimore the day before yesterday. This announcement will startle many, but few will be grieved by it. The poet was well known, personally or by reputation, in all this country; he had readers in England, and in several of the states of Continental Europe; but he had few or no friends; and the regrets for his death will be suggested principally by the consideration that in him literary art has lost one of its most brilliant but erratic stars.
- RW Griswold, 'Death of Edgar A Poe,' New-York Daily Tribune (New York, NY), vol. IX, no. 156, October 9, 1849, p. 2, cols. 3-4

Griswold followed this obituary up with a book about Poe that trashed his reputation. Contrary to what Griswold hoped, however, the book didn't make the public forget about Poe. Instead, it made the romantically-dead writer seem more attractive. Poe's works became more popular than ever, while they forgot completely about this Griswold person.

Poe was possibly the first literary genius produced by the United States. His life was sadly cut short. He suffered poverty and loss in his life, and he struggled to make his way in a difficult literary economy. But one goal in his life he definitely accomplished.

He did become the American Byron – at least, in the sense of being an iconic poet who was considered 'mad, bad, and dangerous to know.'

Read a selection of Poe's poems.

Put a log on the fire, make sure the door is bolted against evil, and luxuriate in some of Poe's thrilling stories. You'll understand where Stephen King came from.

Poe's first book may have left only 12 copies, but guess what you can find on the internet? You can read Tamerlane and Other Poems, if you choose. Be glad: for over a century and a half, scholars had to work hard and travel hundreds of miles for an opportunity to see this.

Want to read the full text of the Griswold obituary? Here you are, courtesy of the Edgar Allan Poe Society of Baltimore.

Do you long to hear a well-respected actor intone the deathless lines of Poe's most famous lyric, 'The Raven'? Help yourself to this stirring rendition by Christopher Walken.

Haven't had enough Poe poetry yet? This Jeff Buckley version of the immortal 'Ulalume' is as haunting as you can get.

The pitiful, the merciful ghouls...
Had drawn up the spectre of a planet
From the limbo of lunary souls –
This sinfully scintillant planet
From the Hell of the planetary souls?
- 'Ulalume'

Image courtesy of the Metropolitan Museum of Art

1According to the Edgar Allan Poe Society of Baltimore, 'Poe’s flirtation with alcohol... was mostly intermittent – a few days of drinking followed by months or even years of abstinence.'2An anthologist was someone who compiled anthologies.