'Digging Holes in Popular Culture' - a Book with a Preface by Douglas Adams Content from the guide to life, the universe and everything 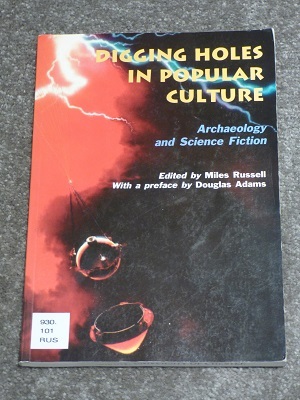 At first glance, you might wonder why you (as a reader of h2g2.com) would be interested in a textbook about public perception of archaeology. However, there are a number of connections that make Digging Holes in Popular Culture1 worth looking at if you happen to find a copy2.

The first important item is the book's subtitle: 'Archaeology and Science Fiction', which indicates that there are connections to the broad genre containing The Hitchhiker's Guide to the Galaxy (which itself contains an archaeologist in the form of Lintilla3). The first section of Digging Holes in Popular Culture contains a discussion of some notable fictional archaeologists.

Fans of Star Trek may know that Captain Jean Luc Picard of the Starship Enterprise studied Archaeology. One of the episodes thus features a professor who had taught Picard, a mission to understand more of the history of the civilisations in the galaxy and a discussion about an ancient artefact. There is an official archaeologist aboard the Enterprise D (Lieutenant Marla Aster), but she is killed in her only episode during a mission to another planet. Another visiting archaeologist (or tomb raider) is Vash, who appears in two episodes of Star Trek: The Next Generation4, including 'Qpid' in which Picard and the omnipotent character Q vie for her affections.

In Doctor Who5, archaeologists release Ice Warriors from their frozen prison, and investigate the Tomb of the Cybermen. In the classic episode 'The Dæmons', a Burial Barrow is excavated by a stereotypical tweedy old white male professor, Dæmons are unleashed and the Doctor has to save the day with the help of his companions and arch-enemy, the Master. 'Pyramids of Mars' is another classic serial and it features an archaeologist in Egypt and an imprisoned evil being. A female archaeologist, Professor Amelia Rumford, appears in the story 'Stones of Blood', in which a stone circle turns out to be a group of alien creatures that the Doctor needs to deal with.

Indiana Jones is perhaps the most famous fictional archaeologist, and there is mention of how his character was partly based on real life tomb raider Giovanni Battista Belzoni. While Dr Henry 'Indiana' Jones combines professor and action hero in one character, the Stargate SG-1 TV series6 brings together the academic Dr Daniel Jackson and the military man Colonel Jack O'Neill (the character Captain Samantha Carter, who is a member of the US Air Force and also has a doctorate in Theoretical Physics, is not mentioned in Digging Holes in Popular Culture).

The representation of fictional female archaeologists is briefly analysed (it is noted as varying from passive love interest to being at the forefront of the action). So Tomb Raider Lara Croft and Professor Bernice Summerfield are mentioned in the book, along with the seductive Professor Anna Vooshka from Carry On Behind (1975) and the intrepid (and beautiful) heroine Xyethia Tomkins from the 1924 film Buckin' the West.

The second section of the book considers the notion of time, and other themes that have been written about in h2g2.com. For example, there is a discussion of fiction that imagines times and places in which humans and dinosaurs co-exist, such as in Arthur Conan Doyle's 1912 novel The Lost World. The archaeology of prehistory is also considered, as science fiction such as Ursula Le Guin's The Left Hand of Darkness can be helpful to give archaeologists different ideas about how people might have lived in the past rather than making assumptions based on the views of the modern time. Terry Pratchett's Discworld, which contains ancient monuments including stone circles, is also mentioned here.

The third section of the book considers archaeology in space and the archaeology of the future. The book considers how predictions of the future tend to be reliant on what has happened in the past, such as the steampunk look of the spaceship Red Dwarf. There is discussion of what features on other worlds could be seen from a distance, including the Pyramid on Mars and the Face on Mars as well as the 'seas' and other features on the Moon.

Finally there is an appendix listing Science Fiction novels featuring archaeologists or archaeological themes. The Restaurant at the End of the Universe from The Hitchhiker's Guide to the Galaxy is mentioned first, for the scenes in which Arthur Dent and Ford Prefect find themselves on prehistoric Earth. Other renowned authors whose works are in the list include: Isaac Asimov, Ray Bradbury, Marion Zimmer Bradley, Edgar Rice Burroughs (for his Tarzan novels featuring lost worlds and also for the Caspak Trilogy in which humans encounter dinosaurs), Anne McCaffrey (for her novels featuring excavations on the planet Pern) and HG Wells amongst many others.

Of course the most important item that is relevant to us here on h2g2.com is the fact that Douglas Adams provided a preface for the book.

Douglas had been invited to attend the conference in 1997 on which the book was to be based. He was not available to give a presentation in person, so he wrote a paper and contributed to the book.

In the preface, Douglas reflected on Egyptology, theories about Minoan Crete, and the Aquatic Ape Hypothesis from a layperson's perspective. He emphasised that a rigorous approach is important when analysing archaeological evidence, so as to be able to judge whether alternative theories are 'madbat' or rational rather than simply dismissing them as 'nonsense'. He also considered how Science Fiction 'illuminates the real world' but also cautioned against taking it too seriously:

Imagination tempered with logic and reason is much more powerful than imagination alone.

An Editor's Note captures the shock of Douglas' untimely death in 2001, before the book had been published. And finally, the book as a whole is dedicated to Douglas:

1Edited by Miles Russell, Oxbow Books, 2002.2This Researcher found it via Book Crossing. Other websites are available.3And Lintilla, Lintilla, Lintilla etc.4She also appeared in an episode of Star Trek: Deep Space Nine.5Douglas Adams was Doctor Who's 11th script editor, holding the post for season 17 in 1979.6A spinoff from the film Stargate (1994).