Berthold Buttgereit and the Gender Police Content from the guide to life, the universe and everything 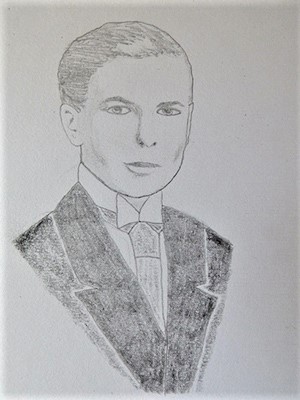 In many times and many places, the police or other security forces have been empowered by the law to arrest and punish people who are perceived to be wearing clothing of the 'opposite sex'. Germany in 1912 was no exception, but for Berthold Buttgereit and several other people, protection was offered by 'Transvestitenscheine' - 'transvestite passes'.

Berthold Buttgereit was born on 23 February, 1891, in Berlin. Named Bertha Emma Charlotte by his parents, as a child he preferred joining in with boys' games than spending time with girls. He had one sister and his parents died when he was fairly young.

In 1896, Dr Magnus Hirschfeld moved to Berlin and came to prominence as an outspoken supporter of rights for people in sexual minorities. In 1909 his assessment of someone known only as Käthe T as wearing the clothing that corresponded to the person's inner self enabled Käthe to obtain a 'Transvestite Pass' from the police in 1910. The pass confirmed that the police were aware that Käthe was known for wearing men's clothing.

Berthold visited Dr Hirschfeld in 19122 and received a 'Transvestite Pass' that enabled him to live comfortably as a man privately, publicly and professionally. In 1918 he received a travel pass to go to Cologne, and on the back was written 'Bertha Buttgereit is not forbidden to wear men's clothes'. On 8 November, 1920, he officially changed his name to Berthold.

Soon after changing his name, he applied for a licence to marry his girlfriend (as they had been living together for eight years) but when the register office saw his birth certificate, the application was refused. Berthold went to court to try to change his birth certificate, but the outcome of the case was not recorded.

What is known from the Cologne Address Book and Telephone Book records is that Berthold worked as a bookkeeper, even during the time of the Nazis3 (perhaps helped by Berthold being blond and blue-eyed so he didn't draw attention to himself in any other way). He worked his way up to the role of Office Manager by 1950 and became a pensioner in 1958. He disappeared from the Telephone Book in 1984, when he was 93.

Over time, laws have been criticised and convictions overturned. For example, in 1975 the case of City of Columbus vs John Rogers noted that:

Modes of dress for both men and women are historically subject to changes in fashion. At the present time, clothing is sold for both sexes which is so similar in appearance that 'a person of ordinary intelligence' might not be able to identify it as male or female dress.

In 1978 the case of City of Chicago v Wallace Wilson identified that:

Absent evidence to the contrary, we cannot assume that individuals who cross-dress for purposes of therapy are prone to commit crimes.

In spite of those realisations, the law can still cause problems. For example in 2004 an African American women's football player was arrested in a restaurant after she used the ladies' toilet when someone made a complaint. Controversially, in 2016 in the US state of North Carolina, HB2 (House Bill 2: Public Facilities Privacy and Security Act) was passed. HB2 included a clause making it illegal for people to use a single-sex public toilet that did not match the sex on their birth certificate. However, it was roundly criticised, not least because it was never made clear how that clause would be enforced. In March 2017 the clause was repealed4.

Thus, many transgender, intersex and gender nonconforming people still fear they will be judged not to 'pass' (ie they may not match the informal gender police's expectations of male or female appearance) putting them at risk of verbal abuse or physical violence.

However, the story of Berthold Buttgereit gives hope that there will be a time when everyone can be themselves without fearing the gender police.

1Inverted commas are used here, because as Eddie Izzard once said, 'They're not women's clothes - they're my clothes'.2Hirschfeld took photographs of Berthold wearing 'men's clothes' and 'women's clothes' and published them in his 1930 book Geschlechtskunde Vol 5, without mentioning Berthold's name.3Around 20,000 of the 25,000 books that featured in the famous photographs of Nazi book burnings on 10 May, 1933, were from Magnus Hirschfeld's Institut für Sexualwissenschaft (Institute of Sex Research).4The clauses preventing local governments from regulating employment practices and protecting LGBT people from discrimination when accessing public services were not repealed.