'The Left Hand of Darkness' - the Novel by Ursula Le Guin Content from the guide to life, the universe and everything 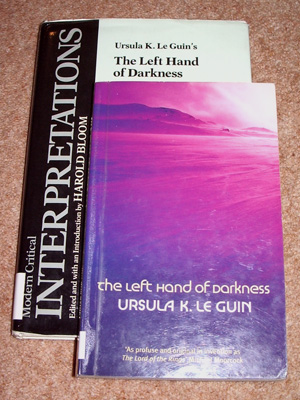 Light is the left hand of darkness
and darkness the right hand of light.

The Left Hand of Darkness was written by Ursula Le Guin in 1969.  The novel considers different styles of government, and also invites the reader to think about what it means to have a gender. Attracting some criticism for its apparent lack of feminism1, the novel is still considered to be one of Ursula Le Guin's best works.

Consisting essentially of three parts intertwined, as revealed in a set of case notes from the archives of a future Earth, the story is told from the perspectives of an alien envoy, the diary of a renegade politician and information gathered by previous envoys including folk tales from the history of the world of Gethen.

The Ekumen is a federation of worlds who collectively have the knowledge of how to travel long distances through space, and they have sent envoys to the planet Gethen, on the far reaches of the inhabited area, to investigate whether the people there would be suitable to join the federation.

Several envoys had visited the planet previously, and found it to be a hostile environment. Thanks to their pioneering undercover investigations, the envoy Genly Ai was able to do somewhat better at living and working on Gethen, as he was accepted as a representative of the Ekumen by the king of the state of Karhide and so enjoyed more luxury than his predecessors had. Used to a more temperate environment than Gethen, which is also known as the world of Winter, Genly Ai became famous for needing extra heating even though he also dressed warmly to keep the cold out. He was also considered unusual as he was quite a bit taller than the planet's inhabitants and had much more strongly masculine features, even though all the people were human-looking so he could be mistaken for a native if he wasn't inspected too closely.

Finding himself and his mission rejected by the king after his patron, the politician Estraven, was exiled for seemingly betraying his state, Ai travelled to Orgoreyn, a rival state, where he was initially welcomed but then imprisoned and harshly interrogated before escaping thanks to Estraven, who had endured his own struggles to evade punishment.

Together, Estraven and Ai crossed the desolate land between the two states on foot, becoming close friends and learning to speak to each ther telepathically, but struggling against the challenging terrain, bad weather, hunger and exhaustion. Finally reaching civilisation, they made desperate efforts and personal sacrifice to ensure that the world of Gethen achieved the goals that were for the greater good of all the people.

The people of Gethen are all referred to using male pronouns 'he', 'him', 'his', but they exhibit both male and female characteristics, such as crying as easily as they laugh, or having a graceful feminine style of movement, but being taciturn like a man is traditionally expected to be2. People can either father children or get pregnant, depending on which sex they become when they enter their fertile phase each month, and many people with several children are both a father and a mother. When pregnant, the people are described as looking 'like human women, but with smaller breasts.'

At first, Genly Ai mistrusts the people of Gethen, because he sees them as male but they don't behave in the way that he expects men to behave. Later, he understands better how the people are a blend of male and female and hence he considers how different life could be if all parents shared child-rearing responsibilities, for example, and how war was much less likely to occur on Gethen as the people 'behaved like animals in that respect; or like women'3.

The two states are separated by the Gobrin Ice, an ice sheet running between mountains and volcanoes, which Genly Ai and Estraven traverse in order to return to Karhide from Orgoreyn without being caught by the authorities.

The governments of the two states are contrasted clearly in the novel. The king of Karhide is known to be unstable, and the politicians in the parliament often scheme to gain advantages for themselves, but ordinary citizens just get on with their work alongside their families, whereas in contrast Orgoreyn is ruled by committee, so every citizen has a place in the society, but inspectors patrol the state to keep an eye on people's behaviour, new laws are enacted as necessary to keep control, and the punishments for going outside one's place are severe.

The conclusion is: 'A man who doesn't detest a bad government is a fool. And if there were such a thing as a good government, it would be a great joy to serve it.' The Ekumen is considered to be the best type of government that Genly Ai and Estraven know, as it is a mediator rather than an enforcer of laws and encourages communication, education and co-operation.

There are other states on Gethen, such as Sith, a state 5,000 miles away across the sea where 'lifewater' is brewed, Perunter, another state across the sea that trades with Orgoreyn, and The Archipelago, but they are distant places compared to the neighbouring states of Karhide and Orgoreyn, so after Orgoreyn punishes him, Genly Ai's best option for completing his mission is to return to Karhide and try again.

The envoys learn the languages of Gethen, but the reports are presented in English translation for the convenience of the Terran reader. Some words have no direct English translation, so are included in the text, and emphasise how the world is alien in many ways, even though in other ways it seems similar to Earth.

The world of Gethen has days and years of slightly different lengths to those of Earth, so there is a chapter of the book dedicated to explaining the hours, days and months. Another important difference from Earth is that each new Gethenian year is denoted as Year One and other years are either in the past or the future relative to that.

The Left Hand of Darkness won both the Hugo and Nebula Awards for Science Fiction novels in 1969 - Ursula Le Guin became the first person to win both awards twice after her novel The Dispossessed also achieved the same accolade in 1974.

1Ursula Le Guin was exploring the idea of gender in the novel, but didn't explicitly develop her ideas in relation to feminism until the 1970s.2The use of pronouns is explored further in Ursula Le Guin's 1979 essay Is Gender Necessary?, where she emphasised that male pronouns have been used generally to encompass both male and female people, but the female aspects are then not as obvious as they might need to be.3The gender of Gethenians was explored in a different way in the 1995 short story Coming of Age in Karhide, in which Ursula Le Guin used female pronouns for some characters as well as male pronouns for others.4Ursula Le Guin revisited the sexuality of Gethenians in her 1989 essay Is Gender Necessary? Redux and apologised for the emphasis on heterosexuality in The Left Hand of Darkness.