Conchita Wurst - Winner of Eurovision 2014 Content from the guide to life, the universe and everything 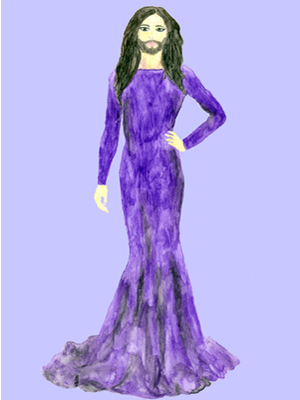 In May 2014, a beautiful and glamorous 'bearded lady' stunned Europe with her singing of the song 'Rise Like a Phoenix' at the Eurovision Song Contest in Copenhagen, Denmark. Loathed by many but loved by more, she went on to win the contest. This Entry looks at the story behind Conchita Wurst's success.

You only have one life - better make it fabulous!
- Conchita Wurst on The Graham Norton Show, May 2014

Tom Neuwirth was born on 6 November, 1988, in Styria, Austria. His parents are Helga and Siegfried, and he has a brother, Andrew. When he was 14, he went through what he called 'parallel puberty' - his mind developed a female persona as well as a male persona. He also realised he was attracted to men rather than to women, and hence struggled with discrimination and bullying when he was at school.

Tom studied to be a fashion designer, but was also eager for recognition of his musical talents - influences on his singing included Cher, Madonna and Lady Gaga. At the age of 18, he appeared on Starmania, an X Factor style talent competition. He adopted an androgynous look, but his inner diva was apparent, especially when he reached the final and sang Shirley Bassey's James Bond theme song 'Goldfinger'. He was the runner up in the competition, but joined a band Jetzt Anders! (Now Different!) with three other Starmania competitors. The band had some chart success in Austria and appeared at Austria's Gay Pride event, but broke up after about a year.

Somewhat uncomfortable with the recognition he received, as at heart he was a private person and a 'lazy boy', he developed the persona of Conchita Wurst as an outgoing and hard working woman. In interviews, no definitive gender identity description has been used1, but it was stated that Tom doesn't want to physically transition as he is a man, but his alter ego Conchita is a woman, and hence is referred to as 'she'. Deliberately provocative with a Drag Queen-like name (Conchita is derived from slang for female anatomy, and Wurst2 is slang for male anatomy) Conchita has a beard (enhanced with makeup) as well as attractive features and glamorous clothes, so she challenges stereotypes of what is beautiful and breaks out of the male/female gender binary.

A Star is Born

You can't take your eyes off me, cos I'm different and my mind is free.
- 'That's What I Am' lyrics

Conchita Wurst debuted on the Austrian talent show Die Große Chance (The Big Chance) in 2011 - initially, the audience was suspicious of the person with long hair, makeup, high heels and a beard, but after they heard her sing Celine Dion's 'My Heart Will Go On', she received a standing ovation.

In an effort to raise her profile outside Austria, Conchita took part in a German reality show Wild Girls. A controversial concept, criticised for exploiting people in Africa and being disrespectful of other cultures, it involved 12 women staying in Namibia for five days without their usual home comforts. Conchita also took part in an episode of The Hardest Jobs of Austria and worked in a fish factory.

Going back to music, Conchita took part in the selection competition for Eurovision 2012 and performed 'That's What I Am', another powerful song that suited her vocal range well. In the public vote, she was the runner up, losing to Hip Hop band Trackshittaz. The band took part in the Eurovision semi-finals, but failed to qualify for the final.

Austria again failed to qualify for the final in 2013, after selecting the contestant Natalia Kelly in a televised competition. For 2014, Conchita Wurst was chosen directly by the broadcasting company ORF to represent the country at Eurovision.

I rise up to the sky - you threw me down but I'm going to fly.
- 'Rise Like a Phoenix' lyrics

The selection of Conchita Wurst to represent Austria at Eurovision 2014 caused controversy around Europe. A petition was started in Austria complaining that she hadn't been chosen by a public vote, but the candidate for Eurovision 2007 had also been selected directly, so no action was taken. A petition circulated in Belarus, calling for her performance to be edited out of the Eurovision show. Eurovision rules state that the show either has to be broadcast complete, or not broadcast at all3 so it was shown in Belarus, but Conchita received nul points from them.

Interviewed for pre-Eurovision publicity in Ireland, Conchita explained that she had noticed the negative reaction on social media, but as a positive person, she just focused on it as getting people's attention. There was a lot of positive reaction, too, and many people in Austria wore knitted beards in support of her and of tolerance - 'everyone should live their life as they see fit, as long as nobody gets hurt'.

Conchita won her semi-final and so went on to perform the song 'Rise Like a Phoenix' in the Eurovision 2014 final, again stunning the audience with her powerful singing of an anthemic song. During the final voting, she gathered 290 points (out of 36 countries, 13 awarded the maximum 12 points, and only four countries gave her nul points) so she was the clear winner (the runner up being the Netherlands with 238 points). Loved or loathed, she achieved her objective of getting people to talk about her.

This night is dedicated to everyone who believes in a future of peace and freedom. You know who you are. We are unity. And we are unstoppable.
- Conchita Wurst, speaking after winning Eurovision 2014

1Tom and Conchita transcend common ideas of male or female, so could be described as 'transgender', and could in addition be considered to be 'bigender' (bi-gender - having two genders in one person) but they have not used such terminology about themselves.2Wurst, German for sausage, is also suggestive of the expression 'Es ist mir Wurst' ('It's all sausage to me'), meaning 'I don't care'.3The broadcast was cancelled in Turkey in 2013, because two girls were going to kiss during the Finland performance.