Namibia Content from the guide to life, the universe and everything 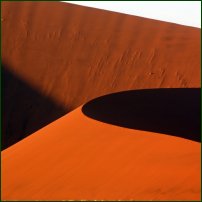 Namibia is a country on the south-west coast of Africa. It shares borders with Angola and Zambia to the north, Botswana and Zimbabwe to the east, and South Africa to the south-east. Namibia has an area of 824,268 square kilometres, making it the 31st largest country in the world. It has a population of around 2,000,000, a number which is small for the size of the country. Namibia is currently suffering from an AIDS epidemic, with around 21% of adults in the country being HIV-positive.

Namibia is mainly a rural country, with only around 33% of the population living in cities. People in Namibia are commonly fluent in two or three different languages: the official language of Namibia is English, however Afrikaans is more widely spoken, and many people speak German, Portugese, Spanish and French, along with the local languages of Oshivambo, Herero and Nama. The capital of Namibia is Windhoek, which is located in the centre of the country. Namibia is one hour ahead of GMT from April to September, and two hours ahead from October to March.

Namibia is a member of the Commonwealth. In the 2006 Commonwealth Games in Melbourne, Australia Namibia won one gold and one bronze medal, in boxing and shooting respectively.

There is evidence of human activity in the area that is now Namibia as far back as 29,000 years ago. The first people to inhabit large parts of the country were the Orlams, a group of Nama-speaking tribes. They moved to Namibia to escape colonial oppression of their homelands around the Cape of Good Hope. Trade in weapons and ammunition was established between the Orlams and the Cape of Good Hope, and this trade aroused the interest of European colonists.

The region became the German colony of South-West Africa, before being colonised by South Africa during the First World War. It remained a territory of South Africa, and in 1966 a guerrilla group, called the South-West Africa People's Organization (SWAPO) began a war of independence, and in 1988 South Africa agreed to renounce its claim on the region. Namibia was officially declared independent in 1990, and SWAPO have been in government ever since. Sam Nujoma was president for the first 14 years of independence, and in 2004 Hifikepunye Pohamba was elected as his replacement.

The People of Namibia

Namibia is made up of many different tribes and ethnic groups, the main of which are:

Namibia is a generally arid country, with the Namib Desert stretching along its coast, and the Kalahari Desert running along its border with Botswana. What rain there is generally falls in the summer, with showers beginning in October and the main rainfall occurring in January and February. Temperatures can range from freezing during the night in the desert, to 50° in the summer.

The only permanent rivers in Namibia are along the borders, with the Orange River in the south and the Kunene, Okavango, Kwando and Zambesi rivers in the north. Namibia not only has vast expanses of desert, but also rocky areas, and lush savannah and woodlands in the centre and north east of the country. The highest mountain in Namibia is the Brandberg, which is 2,579 metres high.

There are many species of wildlife that are unique to Namibia, most notably the black faced impala, but also various mice, bats, gerbils and lizards. Namibia is also home to endangered species such as black and white rhino, and wild dogs. Elephants, cheetahs, mongoose, jackals, meerkats and over 20 species of antelope all live in Namibia, to name but a small selection of the country's wildlife.

As Namibia has everything from tropical forests along the rivers, to the vast expanse of the deserts, its plant life is tremendously varied. Welwitschia mirabilis, one of the rarest plants in the world, can be found in the desert. Specimens have been found that are 2,000 years old, but its seeds can only germinate after seven consecutive days of rainfall, which doesn't happen very often. Also to be found in Namibia are halfman trees (so named because from a distance this cactus looks like a man), the baobab (or upside-down) tree, and lithops (or 'living stones').

Mining is an important industry in Namibia, contributing around 7% of the country's GDP. Diamonds are the most important resource, generating over £280 million per year in exports. Namibia is also one of the world's largest producers of uranium, which is vital for nuclear power. Copper, manganese, lead, zinc, gold, silver, tin, vanadium, semi-precious gems, tantalite, phosphate, sulphur, and salt are also found in Namibia, some of which are classed as 'strategic' minerals (minerals vital to production and industry in the developed world). The country also appears to contain large reserves of natural gas, however these remain largely unexploited.

Namibia has various national symbols, all of which are protected by law, meaning it is illegal to insult or ridicule them.

The coat of arms of Namibia has the national flag in a shield, supported by two antelope which are indigenous to the country. The shield sits in the Namib Desert, and has a fish eagle above it which symbolises the water resources of the country. Welwitschia mirabilis, can be seen below the shield, and above the shield is a headband which shows the traditions of the country, and diamonds which stress the importance of diamond mining to the economy of Namibia. The motto is Unity, Liberty, Justice.

Namibia is becoming more popular as a tourist destination, with most people travelling there for safaris in its 26 parks. The country boasts many opportunities for seeing wildlife, and the Etosha National Park is the most popular area for safari. Etosha contains 144 species of mammal and 340 species of bird, and safaris through the park can take as little as three days and yet see many different species.

However this country has many more activities to offer, such as hunting (within season and with a permit), paragliding, bird watching, white-river rafting, sand skiing, golf, fishing, horse and camel riding, SCUBA diving, hiking, and mountaineering. Popular tourist destinations include the Brandberg (a mountain range popular with rock climbers, and also site of some ancient rock paintings), Walvis Bay Lagoon (where flamingo and other wetlands birds can be seen), Cape Cross Seal Reserve (the largest breeding colony of Cape fur seals in this area of the world), Epupa Falls (a beautiful cascade of water and a prime bird-watching spot), and Fish River Canyon (the second biggest canyon in the world).