How a Bat's Sensor Works Content from the guide to life, the universe and everything 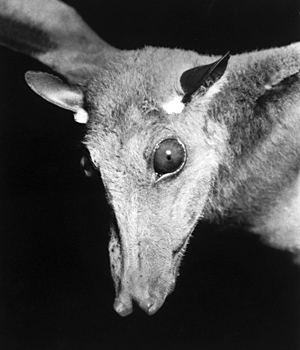 Bats do have eyes and they can see fairly well. But eyes are only useful sensors under daylight conditions and bats are hunters in the dark. Rather than inventing the torchlight to support their night-time activities, bats have developed an active acoustic sensor in the ultrasonic frequency range. 'Ultrasonic' means that the frequencies used are beyond reach for human ears. Apart from the difference between acoustics and radio waves, a bat's sensor is very similar to a radar.

Bats' echolocation sensors are used for navigation, obstacle avoidance and hunting food. Every now and then, they emit a short cry that serves to 'illuminate' the scene ahead. Echoes are picked up by their ears and are analysed in the brain. The time between sending out a cry and receiving a response translates into the distance between the bat and whatever object happens to be around. Stationary objects yield an echo that is a replica of the pulse sent out. Moving objects are revealed by an echo that, apart from being delayed, appears at a slightly lower or higher pitch because of the Doppler effect. Furthermore, echoes from mosquitos, moths and butterflies exhibit fluctuations that are caused by the flutter of their wings. This is what enables the bats to tell the difference between a moth and a leaf swaying in the wind.

Some bats feed on fish rather than on insects. Fish happen to be submerged almost all of the time, so the question arises of how the bats accomplish the task of finding their prey. Well, obviously the bats can detect the perturbations on the water surface when a fish is close to it.

A bat's cry is so loud that the animal would instantly deafen itself if the cry were permitted to enter its own hearing apparatus. A bat's middle ear is built quite like other vertebrate's ears are: there is the tympanic membrane which collects sound waves and converts them into mechanical oscillations. These are transferred to the oval window via the movements of the ossicles.

But wait, there's a tiny but important difference: FM bats (see below) have an additional muscle which disengages the ossicles or attenuates their movements when a cry is produced. Therefore, the bat can literally switch off its receiver chain whilst transmitting a pulse. This muscle is precisely what a transmit/receive switch is to a man-made radar.

All bats use pulsed signals (often called 'clicks'). Of course there is no such thing as a continuous wave bat because every now and then they need to breathe. Bats operate in the 'Low PRF' section - they don't emit a pulse before the last possible echo from the previous pulse has arrived and thus their range measurement is unambiguous.

Within their pulses, bats can use a variety of waveforms which are adapted to their very special purpose. Depending on what their pulses look like, bats are classified as Constant Frequency (CF), Frequency Modulated (FM) or CF-MF bats:

All bats transmit overtones too. Overtones (or harmonics) serve to increase the bandwidth of the signal, which yields more detailed information. Higher harmonics are subject to stronger attenuation in air, thus they are only suitable for endgame use.

A data sheet of a bat's sensor reads as follows:

There's a couple of features in a bat's sensor that can only be explained in terms of modern radar buzzwords:

The sensor of the European pipistrelle is a multi-mode device. The pipistrelle employs a long CW pulse for acquisition of moving targets and switches over to a chirped signal once it has begun pursuit of its meal. Translated into radarese, this means that the pipistrelle features a target acquisition mode and a target tracking mode.

Bats emit between 5 and 20 pulses per second in navigation mode. Thus, their pulse repetition frequency (PRF) is 5..20Hz which yields unambiguous range measurements between 8.5m and 34m. However, the PRF doesn't remain fixed but is adapted to the situation. If there is something interesting then the PRF is increased for what could be called 'track confirmation' - more pulses are sent out at around 50Hz to get more information about a possible target. However, during the whole engagement, bats keep their PRF such that the range measurement remains unambiguous. Short before capturing their prey, CF-FM bats increase their PRF up to 100Hz (unambiguous out to 1.7m) and FM bats can go up to 200Hz (unambiguous out to 0.85m). Increasing the PRF also means that pulse duration is shorter, which yields better range measurements. Using a bat detector (a device that down-converts ultrasonic sound into the frequency range of human ears), you can hear this final PRF rise as the 'catch buzz'.

Bats have two ears and the best you can do with two antennae is compare their results. Thus it is possible to achieve very precise angular information even if the antennae - taken individually - have rather large beamwidths. This technique is called simultaneous lobing or monopulse. Bats use this comparison technique in the horizontal plane.

The moustached bat transmits its pulses at 30.5kHz with a strong first harmonic at 61kHz. Its ears are most sensitive between 61kHz and 61.5kHz. If a target is closing in then the echo exhibits a positive Doppler shift and would appear at, say, 62kHz. However, in such a situation the bat decreases its transmit frequency in order to keep the echo signal within the frequency range of its ears. The same is true for the horseshoe bat whose ears are most sensitive at 83kHz.

Doppler Tracking, or Doppler Shift Compensation is not performed when a target is receding and its echo appears below a bat's hearing range. This indicates that the bats are not interested in anything flying faster and that they can't catch anyway. At the same time, Doppler shift compensation ensures that the transmit signal is kept outside the sensitive frequency range. Thus, CF bats use the same method for transmitter/receiver isolation as is employed in continuous wave radars.

Tiger moths (lepidoptera: arctiidae), including the garden tiger moth arctia caja and the dogbane tiger moth cycnia tenera, appear on a bat's menu. That is, they are listed but don't get served often. Millions of years of co-evolution between bats and tiger moths have made them develop (a) a warning device and (b) a jammer.

The warning device of a tiger moth is a couple of ears that is tuned to the frequency range used by their predators. Like any radar warning device, the moth takes advantage of the 1/r2 law: the signal strength decays at a rate inversely proportionate to the distance, squared. The bat's cry undergoes this attenuation once on the way out, and an echo undergoes it a second time on its way back. Therefore, the moth is able to detect the bat from some 40m away while the bat can hear the echo only at 5m. Upon detection of a bat's target acquisition signal, the moth takes immediate evasive action by tailspinning. In the same situation, a praying mantis will stop moving its wings and descend in freefall.

A tiger moth's jamming signal consists of a series of false echoes whose effect is not yet known, though its purpose is to get rid of the bat. Some theories about the working mechanism are:

To avoid being detected by some clever moths, bats have invented passive location too. The long-eared bat carries its name because of its really big ears. They are so sensitive that the bat can detect the tiny noises of the pre-flight warm-up cycle of some insects - without transmitting anything1. Others like the fringe-lipped bat or Central America's frog-eating bat (trachops cirrhosus) have specialised in homing in on the mating calls that some frogs produce.

Bats have developed non-linear frequency modulation too, but this subject is definitely beyond the scope of this h2g2 University project. Suffice it to say that nature still has something in store that is put to use in a small and decent animal but requires solving dozens of differential equations for a human to just deal with, let alone understand it.

[Note: The following links point to PDF documents. PDF files require that Adobe Acrobat Reader is installed on your machine. Acrobat Reader can be downloaded for free from Adobe]

1The same is true for the North American pallid bat