Monopulse Antennae Content from the guide to life, the universe and everything

The conventional way of enhancing angular accuracy is to take several measurements while the antenna rotates through an area of interest, and then to compare the results. However, this method has its drawbacks even if the antenna is properly calibrated. As the measurements are taken one after the other, the target has moved to another place in-between and the aspect angle has changed too. This change of aspect angle can lead to significant variation in the strength of the echo signal (this is called fluctuation) and render a comparison of consecutive measurements utterly useless.

The monopulse technique was invented to eliminate this source of measurement error. A monopulse antenna also takes several measurements with beams pointing into different directions, but as the name implies, these measurements are taken simultaneously, with a single pulse. Therefore this technique can determine angle very precisely.

The trick is based on one of the underlying ideas of high frequency applications: if your device is not precise enough then you can minimise the error by applying it twice (or using two of them) and seeing what the difference is.

Here the original device is a reflector antenna fed by a horn. The device and its main lobe is shown below. If a target is somewhere around boresight then its echo strength does not vary significantly and the antenna needs to sweep about half its beamwidth to the left and to the right in order to sense a reasonable difference.

Now a second feed horn is added. Both of them are displaced off the focal point which is a slight drawback. The beams created by horns A and B are somewhat wider than the beam of horn H above and point at slightly different directions.

But this is only if you look at them individually. Having two beams means that you can play with the signals that they receive. For example, you can add and subtract them, which is done in the black box above. If a target moves through the scene, passing the points (1) to (7), the following happens:

The Sum output begins with zero at (1), reaches its peak at (4) and is zero again at (7). The output at (4) is stronger than the maximum value ever received by A or B taken individually.

The difference output is obtained by taking the A values and subtracting the B values. It starts at zero in (1) and receives major contributions from A in (2). Moving from (3) to (4), the contribution from A gets weaker because a growing value from B is subtracted. Therefore, the difference output is zero in point (4) when both inputs are equal. Moving on to (5) and (6), the positive input from A vanishes while the negative input from B reaches its peak. At (7), both inputs are zero and so is their difference.

The results for the sum (S) and difference (D) output are plotted below: 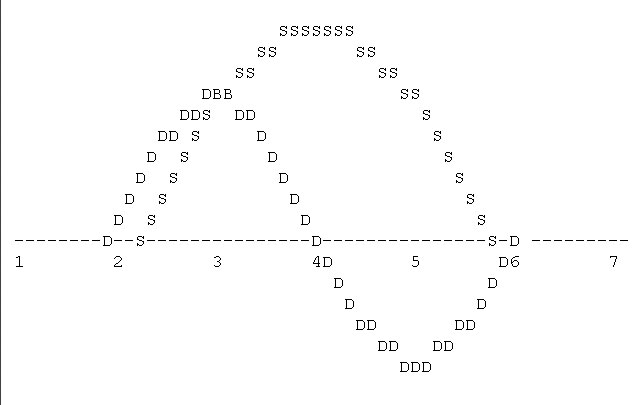 Thus, the measurement accuracy can be improved tenfold or better. And all this without increasing the antenna size. On top of that, a single pulse is enough.

Monopulse antennae are in widespread use in military applications like target-tracking radars and missile-seeker heads. Civilian applications include automotive radars, secondary radars for air traffic control and control systems which need to know the precise whereabouts of a TV-, GPS- or other type of satellite.