Shirley Bassey - Singer Content from the guide to life, the universe and everything 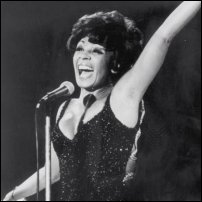 From a shy girl who would hide under the table, to a singing sensation taking centre stage, Shirley Bassey has come a long way over the years. Known for wearing brightly-coloured dresses, she became famous singing the theme tunes for that suave, sophisticated, 007 gentleman, James Bond.

A Star is Born

Shirley Veronica Bassey or, as she is affectionately known, 'Burly Chassis', was born on 8 January, 1937, in Tiger Bay, Cardiff, Wales. Bassey was one of seven children born to a Nigerian sailor called Henry and a Yorkshirewoman named Eliza.

Bassey left school at the age of 15 and started work in a local factory. To supplement this income she also sang in clubs and pubs in the area. During the 1930s, Tiger Bay was an interesting port in which to reside as it welcomed people from around the world. It celebrated cultural diversity through music, but also harboured tensions as its people judged each other by the colour of their skin.

In 1953, talent scouts from London were searching for people to be in the black US-imported shows and came across Bassey. They invited her to go on tour with the show Hot from Harlem, which she toured with until she fell pregnant. She gave birth to her daughter Sharon in September, 1954. Despite being a mother, she was keen to return to her singing career and was promoted by a London agent called Michael Sullivan. Looking back, Bassey can see that putting her career first has often come at a cost, not only with regards to men, but also her children.

If there's anything I wish I could have changed in my life, it would be that I'd been around more when my children were younger. But my singing was like this burning thing inside me and I had to go on with it.

She embarked on revues across the country before she made it big in London by appearing on Al Read's Christmas show at the Adelphi Theatre and followed this by partaking in Read's revue Such Is Life. The show lasted for more than a year and led to her being signed by Philips Records. Under their contract she released the singles 'The Banana Boat Song' and 'Kiss Me Honey Honey Kiss Me'.

No Place For Men

I know that what killed my marriages was my success. The men in my life couldn't take it.

During the 1950s it was clear that her career was going from strength to strength as her single 'As I Love You', released in 1958, became her first number one hit. Success was not on the cards for her relationship with Pepe Davis though. In fact he became so jealous of her achievement that he threatened to kill her and police had to rescue her from a hotel room.

Bassey also decided to separate from her manager Sullivan. In 1961 she married Kenneth Hume, a film director, despite the fact he was openly gay. During their three-year relationship she divorced him twice and had an affair with Peter Finch. Bassey gave birth to a daughter, Samantha1, during the 1960s. Hume denied that Samantha was his daughter and it is believed that her father was Finch. Hume committed suicide in 1967 leaving Bassey heartbroken 'I was so angry with Kenneth for leaving me like that. How could he do this to me? And why?'.

With help from Nelson Riddle, she took on Las Vegas and New York. Bassey had struggled with conquering the US previously due to racial segregation2.

James Bond gave her the biggest advantage of being the world's greatest diva as she was signed up to sing the backing track to 007's Goldfinger. The song was such a huge success both in the UK and across the pond that she became the only artist to release more than one song for the series.

In 1968, she found love in the form of her manager Sergio Novak whom she married. Together they worked on the album Something that brought together songs penned by the most famous music writers of the 20th Century such as Stephen Sondheim, Andrew Lloyd Webber and Janis Ian for Bassey to sing. They also worked on the theme tune Diamonds Are Forever and Moonraker, before taking a break from the music scene. Outside of work the couple lived in Switzerland where they could live as tax exiles and adopted a son called Mark. Bassey and Novak's relationship lasted nine years before they filed for divorce. Bassey later said of the marriage 'You can't take a contract to bed with you'.

Bassey appeared on the Morecambe and Wise Christmas show singing 'Smoke Gets in Your Eyes' during the 1970s.

Bassey returned in the 1990s with a new set of followers who had listened to her Greatest Hits albums and now were taking in her single 'History Repeating', which also featured the Propellerheads. The single went down so well with her supporters that in 2000 EMI released an album called Diamonds Are Forever featuring artists covering the music that had made Bassey such a huge success. That same year, the Queen also proved herself to be a fan by making Bassey a Dame.

During 2003, Bassey was said to be in a relationship with Greg Smith a theatre producer. Bassey was quoted as saying at the time, 'I can't help feeling that if I get too happy it will be taken from me'. Perhaps she had foreseen the future, for just a few months later they split up.

Today Bassey feels that if things go wrong it's not the people around her that she confides in but herself.

When things go wrong, I don't need someone to comfort me. I want to be on my own. I sometimes miss the romantic bit of a relationship. But I don't miss the involvement. My bad times with men have gone. It's the men in my life who have given me the problems.

More recently, Bassey released the single 'The Living Tree' in 2007 and during the same year appeared at the Glastonbury Festival. However, Bassey has also been suffering health issues and in 2008 she cancelled her attendance at Nelson Mandela's 90th birthday party in London after undergoing emergency surgery on her stomach in Monaco where she resides. So now that she is suffering from health problems has the star got any plans for retiring?

1Samantha died shortly before her 21st birthday after falling off the Clifton Suspension Bridge in Bristol.2Bassey was trying to make it in the US before the American Civil Rights Movement began.