Eurovision Song Contest Content from the guide to life, the universe and everything 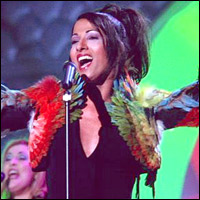 A strange ritual staged each year by member countries of the European Broadcasting Union, this is basically a huge TV show, staged by the country which won it the year before, where people representing over 20 European countries (plus Israel, as they're in the EBU) perform a song. This sounds simple, but it's far from it.

Having started in the late 1950s, the Contest has built up a reputation for terrible music, bad taste, and obvious partisan and political bias in the results of individual countries' votes (which decide the overall winner). People still love watching it, though, and it draws audiences in the hundreds of millions.

From 1975 to 1998, the rules required contestants to sing in an official language of their country, after a little-known Swedish band named ABBA won in 1974 with a song, sung in English, called 'Waterloo'. This change in the rules caused much hilarity among those trying to figure out what, for instance, the Dutch entry was actually about (except among the Dutch, obviously) until the advent of subtitling in English. This event caused even more hilarity because people could then actually work out what the songs were about. The official language rule was relaxed for the 1999 contest, and half the countries promptly reverted to singing in English again.

The winner of the contest is decided by votes from each country. In the past, this job was the responsibility of juries from all participating countries, composed of all the great and the good in their musical community, who would award points to the songs from one point to eight points, then ten and twelve. In modern times, though, telephone voting by the public has largely taken over, and these are tallied to produce the points awarded from each country. What has not changed, however, is the panache and suspense as each country's representative calls in their points at the end, with the compulsory repetition by the show's host for clarity, in English and French. ('Les Pays-Bas, deux points. The Netherlands, two points.') Over the years many artistes have gained notoriety for not receiving a single point in the voting, or, as it has become more popularly know, the dreaded nul points.

In the past, these results were called in over crackling, hissing, telephone lines that tended to fail excitingly at the crucial moment, but with the march of technology it's no fun any more as they are called in over full-bandwidth digital vision circuits with PCM stereo sound.

In summary, there are far too many strange and surreal things about this contest for it to be missed when it comes round every May. Oh, one final point - 99% of the people you ask about it will profess to hate it, but they all love it really. Don't believe them.