Henge Monuments Content from the guide to life, the universe and everything 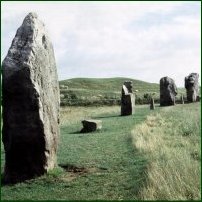 The modern definition of a henge is that of a circular or oval space surrounded by a bank with an internal ditch. It is a type of late Neolithic1 monument typically found in the south of England, although some examples have been found as far north as Scotland and Northern Ireland. Being difficult to find due to the insubstantial nature of timber buildings, the Neolithic settlements that have been discovered were never far from good hunting land and farmland and were close to a good supply of water, thus supporting the conclusion that they were intended to be accessible to the population of the area, either on a daily basis or during festivals.

The name 'henge' originated from Stonehenge, the Middle English form of which was Stanenges, consisting of 'stan', meaning stone, and 'heng', which probably meant hinged or hanging. It is thought that Stanenges, or hinged or hanging stones, referred to the great trilithons of Stonehenge. Nowadays, Stonehenge is no longer regarded as a henge as it lacks the bank with internal ditch, and so will not be considered further in this Entry.

At first glance, a henge seems to be a fairly simple thing to construct. With only the tools available during the stone age, the ditch had to be carved out using wooden shovels and antler picks and the spoil was carried away in baskets by hand, making henge construction a massive undertaking. Almost always built on flat, low lying ground, the simplest henges would be circular and oval enclosures about 25 metres in diameter2.

To enclose this central flat area a bank and ditch were created, the spoil from the ditch being used to build the bank. The bigger or more numerous the ditches, the larger the surrounding bank would become. However, the henge bank and ditch differed from those of defensive sites by having the ditch or ditches3 on the inside and the bank on the outside. The scale of the earthworks varied considerably from site to site, with Avebury being one of the largest.

During the construction of the earthworks entry points were created. Entry to a henge was gained by as few as one or as many as four causeways through the bank and over the ditch. If an even number of entrances were added, they were always placed on opposite sides of the henge. Owing to the indefensible nature of the earthworks with the ditch on the inside, consensus is that these were religious sites.

There was no apparent reason for a henge had to have any internal features and, in those that do, it is not possible to say whether they were original fittings or additions made over the centuries due to changes in use or beliefs. There is no way we can be sure of the original purpose of the henge, and it has been speculated that they were markets or served a cultural purpose, maybe even as cattle pens. The actual purpose of any features built or found within them thus remains a mystery.

Stone circles, the best known of which is Stonehenge, are often found as monuments in their own right, without being associated with a henge work. Thus, whatever the original purpose of a henge, it was complete without a stone circle, thus making its purpose is open to debate.

Arrangements found within henges vary from a full stone circle, through an arc of three or four standing stones, to a single stone known as a megalith. In fact, all have been found incorporated within the Avebury site, the largest stone circle in Europe.

As the original structures have rotted away, these are only found after archaeological investigation, or by aerial observation or photography. They were similar in plan to the stone circles and again were also found in isolation, as at Woodhenge. As Woodhenge, Durrington Walls and Stonehenge are only a few miles apart, it is worth visiting all three sites on the same day.

Cremation pits were used as burial sites and may have been ceremonial, with the Aubrey holes at Stonehenge being the best example. Coves are a group of three to five stones that form an enclosure within a stone circle, the use of which is lost in the mists of time.

There is no evidence of any connection between any of these monuments and any early use by Druids4.

The existence of a priest cast was noted by Caesar in his Gallic Wars, with the cast being partially stamped out by the Romans after the conquest by order of Tiberius and finally by Claudius in his last order in 54AD. John Aubrey's book Monumenta Britannica - Templa Druidum, published in 1648, mentions Druids in error.

Modern Druids only date from 1717 when Henry Hurle held a gathering in the Appletree public house in London, and The Ancient Order of Druids were founded in 1781 as a sort of Masonic order. Neither were religious orders. Druidry today is a growing community recognised around the world.

Some Of The Best Henges

Some Of The Best Stone Circles

The bank and internal ditch that archaeologists now define as a henge are missing at Stonehenge and Castlerigg.

13000-1500BC.2The official definition of a henge states that any monument of this kind under 20 metres in diameter is not to be classed as a henge but as a hengiform monument. There are around 50 known hengiform monuments in the UK.3Some henges had one ditch while others had as many as three.4The Druids were not named by the Romans, as the name seems to have come from the Celtic word for oak tree some time after they disappeared.