The Ring of Brodgar, part of The Neolithic Orkney World Heritage Site Content from the guide to life, the universe and everything 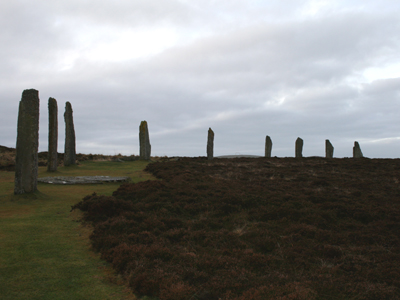 The great Neolithic1 henge the Ring of Brodgar2 stands sentinel on a slightly sloping isthmus, between the two largest lochs in Orkney. Its remaining upright stones stand in sharp juxtaposition to the smooth and rolling Orkney landscape around them. The area is illuminated, even on the gloomiest day, and for many visitors there is an indefinable spiritual nature about the place.

There are views of much of the central part of Mainland Orkney from the Ring, as well as other Neolithic structures, such as the tomb of Maes Howe, the Neolithic village of Barnhouse, and the scanty remains of another henge, the Stones of Stenness.

Where is the Ring of Brodgar?

It lies west of the B9055 on Mainland Orkney, between the Lochs of Stenness and Harray, OS Ref HY2941343. The visitor car park is on the east of the road, opposite the Ring itself. It is owned and managed by Historic Scotland and entrance is free, although there is a donations box by the kissing gate from the road. There are a couple of interpretive panels on display to help visitors understand what little we know about the ring and to set it in the context of the other great Neolithic monuments in the area: Maes Howe and Skara Brae.

What is a Henge?

Henges are an entirely British phenomenon, dating from approximately 3000BC and occurring as far apart as Cornwall and Orkney. They consist of a circular or oval bank with a ditch on the inside and one or two entrance causeways. Usually they contain a circle of standing stones, although occasionally they are timber.

We have no real idea why they were built, nor what their use might have been. As with most archaeological remains which are not easily explained, it is assumed that they were created for ceremonial or ritual purposes.

27 of the original 60 stones remain standing and form a perfect circle on an area of heather, which sharply contrasts with the pastureland and lochs all around. Approaching the site, the stones stand against the sky: an awe-inspiring sight. The ditch still remains, albeit shallower than it would originally have been.

Outside the Ring of Brodgar are a number of burial mounds. Of the 13 that have been identified, four are large and clearly visible. A short distance due east is a solitary standing stone in a field, known as the comet stone.

Some of the fallen stones are in situ. In 1980, at least one of the stones wqas struck by lighting, and some of them are filled with concrete to prevent further splitting and collapse. They are sandstone, sharp-edged and jagged in profile. They all support healthy patches of grey and orange lichens. Some also support graffiti, dating from the 12th Century to modern times.

How was the Ring of Brodgar constructed?

An incredible amount of work went into erecting a stone circle, with estimates putting the number of man hours at between 85,000 and 200,000. The organisation and labour needed to build one of these monuments was immense and reflects a highly-structured and settled society.

Turf and vegetation covering the area would have had to be stripped to allow the outlines of the ditch and the stone ring to be measured and marked out. As it is a perfect circle this would have been relatively simple, using a single length of rope pegged at the centre. The ditch, 123m (404ft) in diameter, is cut from solid rock. At 3m (10ft) deep and 5m (16ft) across, around 4,700m3, or 166,000 ft3, of rock was cut and removed, using stone tools and manpower. When measuring the line of the stone ring, a mark would have been made at every six degrees around the circumference for each stone.

There are several ancient quarry sites in the Sandwick area of Mainland Orkney, that are thought to have been the sources for the Brodgar megaliths. The best known is Vestra Fiold, a hill north of the Bay of Skaill. Prone stones can still be seen on the hillside today. The rock splits easily into slabs, so comparatively little effort would have been needed to shape them.

To transport the megaliths the 10km, (six miles) from Vestra Fiold to the Ness of Brodgar must have entailed enormous effort. It is likely that some form of sled was used overland, although we cannot be sure. The use of logs as rollers is unlikely, given the lack of trees on Orkney, then as now. Looking at the geography of the land between Vestra Fiold and Brodgar, it is easy to imagine that the last leg of the stones' journey would have been by water, across Loch Stenness. There are two megaliths by the eastern shore of the loch and local folklore leads us to believe that more lie in its depths, which seem to support this idea.

The method of erecting the stones is just as open to interpretation, but it is likely that a system of platforms, ropes, levers, and pulleys was used to raise them. Calculations based on the size and weight of the stones suggest that the largest would have taken around 20 men to raise, with the same number needed to make sure that it remained standing before backfilling the hole.

Why was the Ring of Brodgar built?

The purpose of the ring is not known, but it is commonly accepted that all henges had a ritual or ceremonial purpose.

Until the 1840s the Ring of Brodgar was known locally as the Temple of the Sun and the Stones of Stenness as the Temple of the Moon. Were the rings a method of mapping the heavens and marking the passage of time: an ancient observatory? There are certainly astronomical alignments at Brodgar, when natural landscape features are taken into account. For example, sightlines to local landscape features mark the rising and setting of the moon at specific times of the year.

Other theories suggest that the megaliths provided a sacred ceremonial site for local people. Was it a prehistoric meeting place? Was it constructed to honour ancestors?

We shall probably never know the real purpose of the Ring of Brodgar and perhaps that is as it should be. The culture that designed and constructed the Ring is long-forgotten, but its legacy is left to amaze successive generations of visitors.

Should you visit the Ring of Brodgar?

The mystery of the Ring of Brodgar, its sense of peace and timelessness, invokes feelings of awe and inspiration in today's visitors, used as we are, to extraordinary and complex structures of our own. Imagine then the awe in which it must have been held by people 5000 years ago, who knew its purpose, but had never experienced another man-made structure of such grandeur.

Under the Convention concerning the Protection of the World Cultural and Natural Heritage, the Ring of Brodgar forms part of The Heart of Neolithic Orkney World Heritage Site. 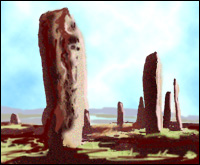