The Italian Chapel, Lambholm, Orkney Content from the guide to life, the universe and everything 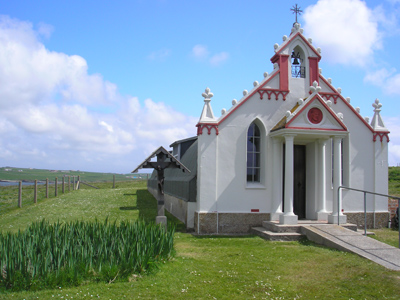 On a slope overlooking the sea on the tiny island of Lambholm in Orkney, Northern Scotland is one of the most popular tourist attractions on the islands. It is a Nissen hut; all that remains of Camp 60 which housed Italian prisoners of war in the early 1940s.

Perhaps that doesn't sound much of a tourist attraction. Indeed, it could be any hut remaining from the War, except for its ornate red and white facade and the statue of St George in front. And inside there is an extraordinary transformation.

This is the Italian Chapel. It is unmanned, open to the public and receives in excess of 100,000 visitors a year. The design and realisation of the chapel are a testament to the fortitude and vision of one prisoner of war - Domenico Chiocchetti - and to the hundreds of Italian POWs who worked to build the other famous memorial to World War II in Orkney, the Churchill Barriers.

When Domenico Chiocchetti left Italy for North Africa to fight with Mussolini's army, he could not have guessed that he was going to become a folk hero to the people of Orkney. More than fifty years after his sojourn in a British prisoner of war camp, the legacy he left behind still captivates visitors to Orkney.

Why Were There Italian POWs In Orkney?

During World War II Scapa Flow1 was the home of the British Home Fleet. The entrances to Scapa between the islands were defended using anti-submarine nets and sunken block ships. However, just after 1am on 14 October 1939, the German U-boat U-47 slipped through the blockships. It did not take long to find its target and within minutes the battleship Royal Oak was on her way to the bottom with the loss of over 800 of her crew.

In London, the First Lord of the Admiralty, Winston Churchill, was appalled that Scapa Flow had been breached and commissioned a plan to block off the Eastern approaches permanently. The construction company Balfour Beatty was contracted to carry out the project of laying the four massive concrete barricades which were to become known as the Churchill Barriers. They extend about 2 km in length, cross four sounds, carry a road on top2 and link Mainland Orkney with Lambholm, Glimps Holm, Burray and South Ronaldsay.

Construction began in 1940 and the barriers were completed in 1945. In total, 66,000 huge blocks of concrete were laid on a foundation of more than 250,000 tons of rock, supporting a road across the length. For such an enormous project a large workforce was required, a precious commodity in wartime Britain, so Italian prisoners of war captured in North Africa were brought to Orkney.

Prisoners of war were prevented, under the Geneva Convention, from working on military projects, so the Barriers were designed as causeways linking the southern islands of Orkney with Mainland, which is what they remain today.

About 1,300 Italian POWs arrived in Orkney in May 1940, soon after work began. About 800 of these men were housed in camps on Burray. However, it was 550 men in the smaller Camp 60 on Lambholm, arriving in January 1942, who were to make the greatest mark: the Italian Chapel.

Camp 60 was home to the Italian prisoners from 1942 until early 1945. The camp at first consisted of around 13 Nissen huts. The Italians brightened up the place, digging flower beds and using leftover concrete to build paths to connect the huts.

Then one artistic prisoner, named Domenico Chiocchetti, gained permission to erect a statue in the main square of the camp. He created a splendid representation of St George slaying the dragon, constructed from concrete around a base of barbed wire and wire netting - all waste products from the construction work.

The POWs were soon constructing other amenities for the camp including a theatre and a recreation hut, which included a concrete snooker table. Balfour Beatty also used the talents of the Italians in other ways: a Nissen hut, which can still be seen, was used as the motor workshop and employed the services of two POW Ferrari mechanics.

Construction of the Interior of the Chapel

One thing Camp 60 lacked was a chapel. In 1943 the camp acquired a new commandant, Major T P Buckland. He favoured the idea to construct a chapel, which was put forward by the camp padre, Father Giacombazzi.

Late in 1943, two Nissen huts were joined together end to end. The work of turning the huts into a chapel fell to the prisoners, led by Domenico Chiocchetti. At his command were materials that were to all intents and purposes useless pieces of scrap, but the determined Italian brought together a team of prisoners with particular skills to aid his task. Among them were electricians Primavera and Micheloni; Palumbo, a smith; and Bruttapasta, whose work in cement was renowned in Italy.

The first part of the chapel to be decorated was the chancel, which remains the most beautiful part. The corrugated iron of the hut was covered by plasterboard, and an altar, altar rail and holy water stoop were moulded in concrete.

Behind the altar and sandwiched between two windows of painted glass, representing St Francis of Assisi and St Catherine of Siena respectively, Chiocchetti painted his masterpiece and perhaps the defining part of the chapel with its symbolic images of peace and friendship - a portrait of the Madonna and Child. This fresco was based on a prayer card that his mother had given to him as he marched off to war and which he had carried with him ever since. It was a depiction of the Madonna of the Olives, by the 19th Century Italian artist Nicolo Barabina.

In Chiocchetti's representation, the baby Jesus carries an olive branch, as a symbol of peace. The Virgin is surrounded by cherubs, the one to the left carrying the heraldic badge of Moena3, a ship sailing from a tempest into calm weather; the one on the right sheathing a sword in its scabbard. The sanctuary vault was decorated by the painting of Seraphim and Cherubim and the symbols of the four evangelists.

The end result is a work of art that is magnificent even today and must have been utterly stunning to the POWs in 1943.

The metalworkers were also busy. Palumbo created two iron candelabra and Primavera made four more from brass. Palumbo then moved on to the rood screen. He had been an iron worker in the USA before the war and he spent four months constructing the wrought iron screen, creating a work of art from the reinforcing rods of concrete blocks.

The contrast between the east end of the double hut and the remainder was so stark that the decision was taken to improve the entire interior. The rest was lined with plasterboard and then painted by Chiocchetti and others in a Trompe L'oeil style resembling the churches of Italy, with bricks at the top of the wall and a dado along the base to resemble carved stone.

There was little else with which to decorate the chapel, but the prisoners used all sorts of scraps and gradually the chapel took shape. Brass candlesticks were made from the kickboards of ships. Lanterns were made from bully beef tins, and the wire used to suspend them from the ceiling was wire rope from ships. Wood from a shipwreck was used to create the tabernacle.

The gold curtains either side of the altar were the only items paid for, purchased from a company in Exeter using the prisoners' own funds.

Why have a chapel that looked like a church inside but still looked like a Nissen hut outside? With the help of the cement worker, Bruttapasta, the prisoners fashioned an impressive facade with a colonnaded porch, surmounted by a high belfry.

Windows of decorated glass added light and a final thick covering of cement over the whole of the exterior of the huts finished the transformation.

The end of the war meant that the chapel was only in use by the prisoners for a short period of time. It was still not fully finished when the prisoners left the island early in 1945 and Chiocchetti stayed behind to complete the font. The Lord Lieutenant of Orkney, Mr PN Sutherland Graeme, who also owned Lambholm, promised that Orcadians would cherish the chapel that the Italians had left.

During the years after the war the chapel became an increasingly popular visitor attraction. The condition of the building began to deteriorate and true to their word, the Orcadians formed a preservation committee in 1958.

The BBC South European department learned of the committee's work and, in 1959, broadcast a programme in Italy about the chapel, which resulted in a remarkable and emotional journey for Domenico Chiocchetti. In 1960 the BBC paid his expenses to allow him to return from his home town of Moena, in north eastern Italy, to the little chapel, to carry out repairs and to restore the paintwork. On the final Sunday of Chiocchetti's visit, a service of rededication was held in the chapel which was attended by 200 Orcadians. The service was broadcast the following day on Italian radio.

Before he left Orkney in 1960, Domenico wrote an open letter to the people of Orkney. In it, he said:

The chapel is yours, for you to love and preserve. I take with me to Italy the remembrance of your kindness and wonderful hospitality. I shall remember you always, and my children shall learn from me to love you. I thank (you)....for having given me the joy of seeing again little chapel of Lambholm where I, in leaving, leave a part of my heart.

Domenico Chiocchetti returned to Orkney again in 1964 with his wife, and gave to the chapel the fourteen wooden stations of the cross which can be seen there today. In 1992, fifty years after the Italians were originally brought to Orkney, eight of the former prisoners returned, although Chiocchetti was too ill to be with them.

Today the Italian Chapel stands proudly alongside the statue of St George on Lambholm, a lasting testament to the Italians who created them. They are all that remain to remind us of the occupants of Camp 60, other than the Churchill Barriers themselves.

Domenico Chiocchetti, and his colleagues from Camp 60, left behind a work of art cherished to this day by the people of Orkney, proving that even in the darkest days of war, the goodness of mankind can and does shine through.

Admission is free, but please remember that upkeep of this remarkable place relies on donations.