Yorkshire Wildlife Park, South Yorkshire, UK Content from the guide to life, the universe and everything 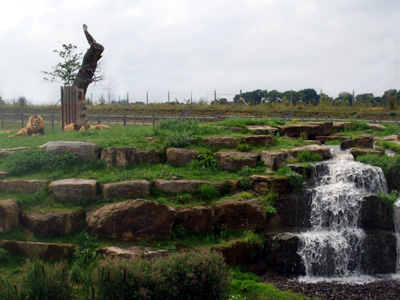 Yorkshire Wildlife Park is a 21st Century zoo located near Doncaster in South Yorkshire. Opened in 2009, visitors now can view a wide range of animals - everything from ankole to zebras, including most notably lions and tigers and polar bears, oh my!

The Yorkshire Wildlife Park was built on the site of a former farm and riding school. It was officially opened in 2009 by Justin 'Mr Tumble' Fletcher, best known for young children's programme Something Special1 (2003+), Gigglebiz2 (2009+) and most programmes on CBeebies3, in April 2009.

The zoo first came to prominence in 2010 when it rescued 13 lions from Oradea Zoo, a run-down zoo in Romania, in Europe's largest big cat rescue. That zoo kept their lions caged up, with five lions kept in a cage only 3m × 4m in size.

As a brand-new purpose-built zoo, the design of the Yorkshire Wildlife Park ensures that all the animals have large, stimulating enclosures that are landscaped to provide different areas. Through the use of ha-has4, raised walkways, moats, glass viewing areas and slopes, visitors are ensured views of the animals in their enclosures unblemished by the sight of fences and cages. The Yorkshire Wildlife Park stretches over 290 acres of grassland, woodlands and wetlands.

Three animal species found at the zoo are considered to be critically endangered.

By the entrance is the Safari Village, a range of various shops, including the main gift shop, as well as the café which are open to visitors who do not wish to enter the zoo itself.

One recommended way to see all of Yorkshire Wildlife Park's animals is by following an anti-clockwise route through the park. After passing through the entrance, viewers encounter the Meerkat and Mongoose Mansion.

Not actually a mansion - the area contains desert-like conditions as well as rocks that meerkats (Suricata suricatta) often use when on sentry duty, with tunnels dug into the sand below. Artificial tunnels lead between various enclosures, which allow the meerkats and mongooses (Cynictis penicillata) to have a wide area to explore while visitors can get close, with glass walls provided for visitors who cannot see over a wall. The area has been created to have an African feel, with a replica African mud hut and termite mounds.

Behind Meerkat and Mongoose Mansion is the bird pond, containing ducks, swans, oyster catchers, moorhens and, since 2011, flamingos (Phoenicopterus phoenicoparrus).

The zoo's most famous area, Lion Country was built between October 2009 and May 2010, when the lions (Panthera leo) arrived from Oradea Zoo in Romania. Nine acres in size, it contains three separate areas known as Cezar Mountain, Simba Falls and the Savannah, allowing three separate prides to coexist. Raised walkways, including a bridge over the river dividing the reserves, allow visitors to see the lions although, as they can spend up to 21 hours a day asleep, they aren't always the most active of animals.

In the middle of the zoo near the African Plains is the Meet the Animals area. This is where visitors and especially children can come up close with domesticated animals, depending on the day's timetable.

Next to the Meet the Animals area is Wallaby Walkabout, home to a number of Bennett's Wallabies (Macropus rufogriseus). These cute animals are a firm favourite with young children.

From Wallaby Walkabout, continuing anti-clockwise around the outside of the park, visitors pass the domesticated Bactrian camels (Camelus bactrianus). The similar Wild Bactrian camel (Camulus ferus) is a critically endangered species.

Next to the camels is Leopard Heights, the highpoint of which is the large, wooden tower which offers visitors superb views overlooking the Amur leopards (Panthera pardus orientalis) on one side, and the giraffes on the other. Yorkshire Wildlife Park boasts the largest Amur leopard enclosure in the world, which won the BIAZA 'Most Significant Advance in Husbandry and Welfare' award when it opened in 2012. The leopard enclosure contains a 10-metre-tall climbing frame. Fortunately this is not too close to the 8-metre-tall viewing tower, which has no netting or glass separating visitors from the enclosure. The notoriously shy leopards can also be seen at ground level where there is a glass window.

Amur leopards are critically endangered, and, with only 50 left in the wild, they are Earth's most endangered carnivore. Three cubs were born at the zoo in June 2015.

At the time of writing the wildlife park contains four giraffes (Giraffa camelopardalis) although space has been provided for a maximum of 16. One of the giraffes, Palle, was rescued from a zoo in Copenhagen in 2012.

Sadly Yorkshire Wildlife Park was unsuccessful in its attempt to rescue Palle's brother Marius from the same zoo. In February 2014 the Copenhagen zookeepers shot Marius and dissected him in front of watching children not expecting to see a giraffe slaughtered, butchered and then fed to lions. A statement released at the time stated that they had killed the giraffe on the grounds that it had siblings and so was surplus to breeding programme requirements.

Land of the Tiger

Since 2011, Yorkshire Wildlife Park has been home to Amur tigers (Panthera tigris altaica), also known as Siberian tigers, another endangered species with less than 350 left in the wild. The park has one of the largest tiger exhibits in Europe with woodlands, grassland, ponds and a waterfall in the enclosure. Visitors are afforded a great view of these magnificent, noble animals from a raised, fully accessible 150m-long walkway.

The wetlands at the far end of the park is home to West African Sitattungas (Tragelaphus speckii), swamp-dwelling antelopes. The other side of the path leads to the park's South American themed area.

The far left corner of the park is where you can see all sorts of South American animals. The highlight is the ¡Viva!, an area in which you can enter an enclosure and encounter South American animals up close. These include various rodents such as agoutis (Dasyprocta azarae), capybara (Hydrochoerus hydrochaeris) which is the world's largest rodent, and mara (Dolichotis patagonum). Other animal types found in ¡Viva! include flightless bird the rhea (Rhea americana) as well as a troop of squirrel monkeys (Saimiri sciureus).

Near to the ¡Viva! enclosure are giant anteaters (Myrmecophaga tridactyla), six-banded armadillos (Euphracus sexcinctus), coati (Nasua nasua) and marmosets (Callithrix jacchus). At time of writing (September 2015) a giant otter enclosure is under construction.

Yorkshire Wildlife Park has a 10-acre site dedicated to its polar bears, one of the largest polar bear enclosures on Earth. Divided into four sections complete with its own lake and island, it was built to resemble the grass and shrubland of the summer Arctic Tundra. August 2014 saw the arrival of Victor, the only polar bear (Ursus maritimus) in England. He is the first polar bear to live in England for over 20 years. A second polar bear, Pixel, arrived in spring 2015.

Since 2013 the park has been in talks with the Parque Zoológico Benito Juárez, a Mexican zoo, to rescue their polar bear Yupi, who is kept in a small, concrete enclosure with little shade or stimulation in temperatures averaging 35°C.

A walk back from Project Polar can be enjoyed through the Lemur Woods enclosure, where visitors can come up close to these fascinating tree-dwelling creatures. There are two lemur species in the park, the endangered Ring-tailed Lemur (Lemur catta) and the critically endangered Black-and-White Ruffed Lemur (Varecia variegata).

In the bottom left corner of the park can be found the Rakuni pack, commonly called Painted Dogs (Lycaon pictus). The second-most endangered carnivore in Africa, there are less than 3,000 in the wild.

Following the path from the Painted Dogs to the exit takes you past the baboons, located adjacent to the Monkey Play House and Café. The Monkey Play House is a soft play centre that contains a large glass window overlooking the Guinea Baboons (Papio papio). At set times chosen children inside the soft play centre can interact with the baboons on the other side of the glass in order to stimulate the baboons and reward them with food. In addition to the Monkey Play House there is also the Zoom Super Slide Barn, containing large drop slides, although height restrictions apply and children must wear long sleeves, long trousers and socks to be allowed down the slides.

Both the Monkey Play House and Zoom Super Slide Barn are indoor play areas, although there are also two outdoor play areas for children to explore. The newest is the Big Bug Play Area beneath a canvas picnic tent, which is perhaps best suited to younger children, and the larger is the Forest Adventure Play Area containing a treehouse.

The Yorkshire Wildlife Park also contains a number of cafés, restaurants and the compulsory ice cream parlours, although naturally picnic tables are available for people bringing their own packed lunch.

The park is located off Warning Tongue Lane, a road between the B1936 and the A638. For a new tourist attraction, the Yorkshire Wildlife Park is surprisingly difficult to get to. Although its website lists its location, if you are on holiday in Yorkshire with no Internet access, and only planned your itinerary after visiting the local Tourist Information, that is not much use. At time of writing (2015) its location does not appear on the latest national or regional road maps, although Warning Tongue Lane appears on maps of South Yorkshire. The latest leaflet that is available in tourist information offices simply states:

Yorkshire Wildlife Park is approximately 10 minutes from Junction 3 of the M18. Close to the M1 and A1(M) at Branton, near Doncaster. For SatNav enter the postcode DN4 6TB for Warning Tongue Lane and then follow the brown tourist signs [from there].

Unfortunately this rather assumes visitors have a SatNav. If you go to Junction 3 of the M18 and you do not have a SatNav, the park is very poorly signposted; knowing that it is 10 minutes away in an unknown direction is little help.

This leaflet does contains a map that shows where London is, even though most people who pick up a leaflet for Yorkshire Wildlife Park presumably were expecting a map showing the location of the park instead. London's location, having been established in Roman times, is well-known; it remains rather well signposted elsewhere.

Information boards all around the Park are full of various initials, but what do they mean? Has a polar bear really earned a Master of Science degree, or what else does 'MSC' stand for?

In fact, the information boards are listing how endangered different animals are, as well as what breeding programmes the zoo is working in conjunction with regarding which animals. They also state what the animals' IUCN Classification is, which lists how endangered a species is.

1In which he plays Justin, Mr Tumble, Granddad Tumble, Lord Tumble, Cliff Tumble, Cool Tumble, Baby Tumble, Fisherman Tumble, Aunt Polly, Aunt Suki and Penny Farthing.2Playing characters including, but certainly not limited to, Captain Adorable, Anna Conda, Ann Teak, Arthur Sleep, Major Boogie, one of the Berrito Brothers, Dina Lady, DIY Dan, Doctor Doctor, Farmer Dung, Gail Force, Humphrey, Keith Fitt, King Flannel, Lost Pirate, Milkshake Jake, Nana Knickerbocker, Professor Muddles, Rapids Johnson, Simon Pieman, Will Singalot etc.3Appearing as himself in Tikabilla (2002-7), Justin's House (2011+) as well as the CBeebies proms and pantos, he also has been a CBeebies presenter. He was the voice of Doodles and Jake in The Tweenies (1999-2003) and is the voice of Shaun and Timmy in Shaun the Sheep (2007+) including for the 2015 film and spin-off Timmy Time (2009-2012).4A recessed wall and ditch which forms a physical barrier in a landscape while preserving an unrestricted view, used for aesthetic purposes.