Tigers in Danger Content from the guide to life, the universe and everything 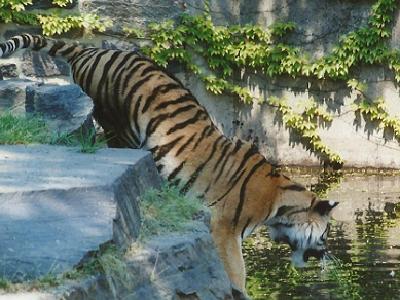 Tyger, tyger, burning bright
In the forests of the night,
What immortal hand or eye
Could frame thy fearful symmetry?
- Extract from The Tyger, William Blake

The tiger has been one of man's greatest enemies for as long as the two have shared territory, a major reason for so many countries allowing them to be hunted for so long. The unique striped coat of the tiger has led to a constant demand for their skins, and their sheer size and the danger they represent has led to hunters considering them to be a sporting target (notwithstanding the fact that tigers don't have guns). Now that three of the original eight subspecies of tiger are extinct, people are finally becoming aware of the danger they are in.

Bengal tigers measure three metres, on average, from head to tail, with the males bigger than the females. A male Bengal tiger can weight 220kg, or 34 stone, and have a territory of up to 100 square km.

Bengal tigers are the subspecies that produce the famous white tigers (brown stripes on a white background) beloved of zoos everywhere. It is important to note that these are not albino tigers, but actually a version of the Bengal tiger with different colour genes - just as some humans have blue eyes, so some Bengal tigers have white coats. They are rare in nature, since their coat not only provides poor camouflage, but also makes them a more sought-after prize for poachers.

The majority of Bengal tigers are found in India, although some prefer neighbouring countries such as Nepal. They are extremely adaptable as to their habitats, which range from the hot jungles of North India to the icy forests of the Himalayas, which is probably the main reason for their status as the commonest type of tiger. Sadly, this is a relative measurement, as even their numbers are low - estimates vary from 3000 to 4500 (at the time of writing) with around 300 in captivity - and they are still on the decline.

Indochinese tigers are smaller than Bengal tigers, with males measuring 2.7 metres and weighing 180kg, or 28 stone, and being bigger than the females. Their territory size is unknown, but thought to be considerably smaller than that of the Bengal tiger. There are between 1200 and 1800 alive today, mostly in Thailand, with about 60 in captivity worldwide.

The biggest of all the subspecies, male Siberian tigers can typically weigh up to 300kg, or 47 stone, and measure 3.3 metres. Since they move according to the seasons, they have the largest territories of all, with males having ranges of up to 1,000 square km. There are between 300 and 400 left in the wild, with another 500 in captivity.

The rarest of the remaining subspecies, approximately 30 South China tigers survive in the wild, with 50 more in captivity. They are small tigers, males measuring about 2.5 metres and weighing 160kg, or 24 stone. Because there are so few, very little is known about them. They are only found in China, and have unusually spaced out markings, compared to other tigers.

Found only on the Indonesian Island of Sumatra, the Sumatran tiger is the smallest of all tigers. A male will typically measure 2.4 metres and weigh 120kg, or 19 stone. Although there are only 400 living in the wild, these are not in severe danger since they often live in one of the five national parks. There are also over 200 in captivity worldwide.

Tigers are not natural predators of man. In fact, only a very few tigers ever kill a human, and even fewer go on to become regular man-eaters. Usually, the process starts with a tiger which is physically unable to kill faster prey, due to age or injury, although occasionally a young tiger will kill a human by chance. However, once the tiger develops a taste for humans, it will continue to prey on them, until it is caught. A well-known method of protection against tiger attacks is to wear a mask on the back of the head. This works well because tigers have a natural tendency to attack from the rear, since their main method of slaughtering involves biting the back of the neck. Therefore, the tiger thinks the wearer is facing it, and will not attack.

Despite there being very few man-eaters in the tiger world, tigers are very much feared. The poem at the top of the page was taken from Blake's Songs of Experience, and was written as a contrast to The Lamb in his Songs of Innocence because the tiger was seen as everything the lamb was not - fearsome, aggressive and dangerous. The man-eating habits of some tigers have long been used as an excuse to kill them, but in fact, hunting tigers encourages man-eaters. This is because some tigers are injured by inexpert shooting, leaving them unable to hunt their natural prey and instead forced to look elsewhere - at humans.

Probably the biggest threat to tigers is loss of habitat. Deforestation is essential to the timber industries, but it drives animals away, leaving the tigers with no food. Land is being cleared in order to be farmed, which not only drives tigers away, but leaves them in danger from farmers who will shoot them on sight to protect their livestock.

Increasing populations mean that more land is needed for building on, which destroys forests and can also cut them into pieces, with tigers from one part of the forest being isolated from other parts. This leads to problems finding mates, and eventually inbreeding, which is very bad for their diversity.

There is also a very big problem with the illegal poaching of tigers. All tigers are on the endangered species list, and yet they are still being slaughtered. Their pelts are highly valuable because of their beauty, but in fact it is their body parts which are most sought after. Chinese medicine has a use for many tiger parts, and although they are of little scientific value, the demand for them is a major contributor in driving tigers to extinction.

Tiger eyes are widely used to treat symptoms of epilepsy, tiger penis soup is thought to cure impotence, tiger hearts are eaten in the belief that they will give the consumer courage, and tiger brains are rumoured to guard against laziness. There are many other beliefs, and in fact, there is barely a part that does not have some medicinal value attributed to it.

There are a great many organisations in the worlds whose aim is to prevent the extinction of tigers. Save The Tiger, the WWF1 and TRAFFIC are three, but there are many more, all in need of support. Most have schemes that the general public can join, and advice on how to help.

Breeding programmes exist all over the world, with international zoos cooperating in order to avoid inbreeding. Education programmes are teaching the people who live near the tigers how to live with them safely and more peacefully, and are also crusading against the use of tiger parts in medicine. There are also strict anti-poaching laws in many countries, carrying stiff penalties.

If you want to help save the tiger, there are many things you can do.