The 13 Species of Otter Content from the guide to life, the universe and everything 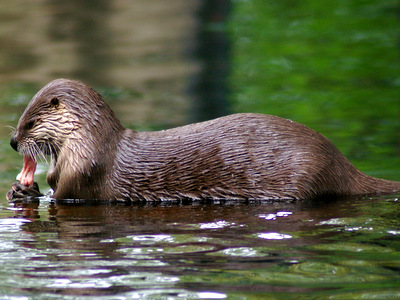 13 - unlucky for some, but not for all otter-nuts1! There are a total of 13 different otter species across the globe.

They belong to several genera because of morphological differences. For example, Enhydra - saltwater-dwelling and Aonyx - which literally means 'without nails.' (Although in the case of the Cape Clawless Otter, Aonyx capensis, which has three claws on each of its hind feet, it isn't completely accurate.) The Latin names just give an idea of morphology, in order to point out differences.

So here's a bit more about these aquatic beauties.

Lutra lutra - This coastal and riverine otter has a stronghold in the Highlands and Islands of Scotland, Scandinavia, and the Baltic. However, they are also to be found elsewhere on mainland Europe - France, Spain, Greece and Turkey. The Eurasian Otters are solitary and only come together for mating. Their prey consists largely of fish, but it also supplements its diet with amphibians, small mammals, and even young fledgling birds They have clawed and webbed feet.

Lutra felina - Unfortunately, not a lot is known about this particular endangered species of otter. A coastal otter found on Pacific Ocean coasts from Peru to the most southerly tip of South America. Much more study needs to be carried out to discover their true numbers and lifestyle. This information is vital if the species is to be successfully protected.

Lutra longicaudis - A solitary species, but still the most widespread otter in Central and South America. Guessing as to the reason for their widespread distribution, it could be suggested that each solitary otter requires a very large territory, as in the case of the Eurasian Otter. Thus, although widespread, it's still lacking in population density. Therefore, this otter is classified as endangered.

Lutra maculicollis - Resident in all African countries south of the Sahara, though absent from rainforest habitat. The social dynamics of the Spotted-Necked Otter are somewhat reminiscent of human dances. They form large, separate male and female groups, and 'ne'er the twain shall meet! Well, except for mating that is.

Lutra perspicillata - Another social otter from South East Asia, including Indonesia and China, whose populations are classified as vulnerable. They are known to live alongside the Asian Short-clawed Otter as they share similar requirements for habitat and food.

Lutra sumatrana - Just know you're wondering, so.... The answer is 'Yes, they do have a hairy nose'. 'Why has it got a hairy nose?' you ask. Well, it's probably to aid them in detecting their prey in particularly murky waters, just as they do with their whiskers (vibrissae). This species was once widespread throughout southern Thailand, Indochina, Malaysia and Indonesia. By 1998 it was thought to be extinct, but, luckily, projects funded by the International Otter Survival Fund (IOSF) found it in Thailand and Vietnam. These projects are ongoing and more information can be accessed via their site, where kind donations are also gratefully received. The Hairy-nosed Otter has also been recently discovered in Cambodia (Kampuchea). Hunting, yet again, is a serious threat to their numbers.

Aonyx capensis - An endangered otter species found from South Africa, north through Ethiopia and Senegal. Unlike its name suggests, it isn't totally clawless. It has three claws on the middle toes on each of its hind feet - a rather curious feature, which nobody seems to know the cause of. Probably, as in most species, it is an adaptation to its habitat. They are a mildly social animal. Mildly, in the sense that they form small family groups.

Aonyx cinerea - The smallest of all the otters, it forms larger groups than the Cape Clawless and its distribution is in southern and eastern Asia, hence the name. More needs to be discovered regarding its status in the wild, as with many of the otter species.

Aonyx congica - A strange otter, in that, it is the least aquatically-adapted otter of them all. Although closely related to the Cape Clawless Otter, it lacks both thick insulating fur and webbing on the feet. Well, that's not strictly true, they have partial webbing on their hind feet, but their front feet are totally free of webbing. They are to be found in Central Equatorial Africa and have yet to be evaluated regarding their conservation status.

Lontra provocax - This is a very little-known freshwater species, probably due to the fact that it is critically endangered. Its current known distribution is in parts of southern Chile and western Argentina. It should be a priority to discover more about this otter in order to help increase their numbers and protect their habitat - at least to attempt to halt the decline in numbers.

Lontra canadensis - The American version of the Eurasian otter with many similarities. As the name suggests, it is resident in the USA, although it is absent from mid-states. This is due to the fact that the American River Otter being legally hunted in 38 of America's states - this is not something to be proud of. It would help the American River Otter's cause a great deal if all you US 'otter-nuts' would write to your politicians demanding an outright ban on the hunting of this beautiful animal.

Enhydra lutris - The only truly marine otter, it spends virtually all of its time in the sea. It even mates and gives birth to its cubs in the sea, spending only brief periods on shore for thorough grooming. The mother supports her cub on her belly while floating on her back. While resting, the sea otter attaches itself to giant kelp by rolling itself up in it, thus acting as an anchor. This is essential, especially in rough seas. Another clever trick of the sea otter is that it carries a favoured stone during each feeding bout in the folds of its skin which it then uses to crack open its favourite food, abalone, and other shellfish. The Sea Otter is the heaviest of the otters, weighing in at around 45kg, but is still not the largest otter. That title must go to the Giant Otter. Sea Otters are endangered and this is partly due to the excessive hunting of them in the past. They have the most dense fur2 of any otter and their pelts were highly prized. They form large groups or rafts as they're called, within easy reach of the coastlines around North America, Northern Japan, Kamchatka and the Commander Islands, thus making them easy targets. Thankfully, they are now protected3

Pteronura brasiliensis - The name, although not very original, is nonetheless apt for this species of otter. Measuring approximately 2m in length and weighing 32kg, it's definitely a giant. In fact, it's one of the largest carnivores in South America. Giant Otters live in very large groups in the oxbow lakes of the Amazon and its tributaries. A favoured prey species is, believe it or not, piranhas! There probably aren't many animals, other than, say, the Cayman, who would brave the infamous teeth of the piranha! Giant Otters are extremely vocal and can most often be heard long before they are seen. They keep in constant touch with family members by whistling loudly to each other. Very clever adaptation to life in the Amazon jungle and its murky waters.

The use of pesticides and other agricultural and construction chemicals polluting freshwater systems, can cause otters and many other species to become so ill that they can no longer hunt to survive, resulting in a slow death.

Democracy is the life-blood of America,

and that means you really can make a difference to the future survival of the American River Otter. Write to your US politician to ask for an outright ban on the hunting of this beautiful animal.

Well, all you budding 'otter-nuts' out there, hope you've been able to get just a small taster of the world that is the otter. A good deal more information was given on some of the species than on others. Unfortunately, this can't be helped as so much is yet to be discovered about certain otters and their habitats. However with organisations such as the International Otter Survival Fund, the Friends of the Sea Otter and the Otter Trust, more is being learned all the time about these creatures, which will hopefully help to increase their numbers and secure their future survival.

1This Researcher's nickname for otter lovers.2The Sea Otter's dense fur is well adapted for marine living and can therefore withstand much more exposure to marine salt than other otters. Regular grooming is still essential, and a fascinating fact is that they blow air into their fur to aid both buoyancy and heat retention.3Check out the Friends of the Sea Otter website for more amazing facts about this wonderful creature.4Extract from Abraham Lincoln's famous Gettysburg Address delivered on 19 November, 1863.