Eurasian Otter Content from the guide to life, the universe and everything 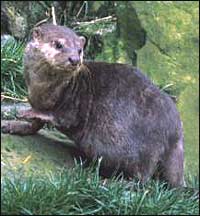 The Eurasian Otter (Lutra lutra) is just one of 13 different otter species worldwide. Its captivating, intelligent, inquisitive and playful nature make it one of our favourite British mammals. Quite apart from the fact that it's so damn cute! Somewhat cumbersome on land, but in water it is a graceful and supreme predator. They absolutely adore playing in snow and have been observed shooting down snow slides on their bellies for the sheer fun of it. Any fast-flowing water, such as waterfalls, are an open invitation to an otter to splash about and frolic in. Gavin Maxwell described these particular otter games in his famous book Ring of Bright Water about his pet otter 'Midge' and the adventures they shared in the remote West Highlands of Scotland. Whether you've read the book or seen the film, you can't help falling head over heels in love with these adorable creatures.

A mustelid punk
Spikey is Lutra when wet
He's never a thug!

Although it says the otter is never a thug, it's not recommended trying to handle one without gloves - they bite! Just ask Terry Nutkin, who lost two of his fingers to an otter. He did, however, say that it had been his own fault and so forgave the otter. He remains two fingers short, but still an out and out otternut to this day.

Males (dogs) tend to be somewhat larger than the females (bitches) having an overall length of 1-1.3 metres from nose to tail. The tail is long, thick at the base and tapering at the end, and measures 40-45cms of total length, and is used as a powerful rudder when swimming. Dogs generally weigh in at around 9-10kg, with bitches a good deal lighter at 7-8kg.

Warm shades of brown on upper body, pale cream/fawn fur on underside reaching right up under the chin. Coats consist of two distinct layers - the outer layer is of coarse, waterproof guard hair, while the inner one is dense and soft to trap air for warmth while swimming in waters that are, more often than not, freezing cold.

Otters are short-limbed with five-toed, clawed and webbed feet, and have long sensitive whiskers around their snouts which they use extremely effectively in murky waters to help them catch prey. They have a very acute sense of smell and hearing in order to detect not only their prey, but also any threats so that they can make a quick exit. Their eyes are placed high on their heads so that they can detect danger whilst the rest of their body remains under the surface of the water. These special features are what makes the species so elusive and can make otter watching/spotting very difficult, but that bit more rewarding when the enthusiast is blessed with a sighting. Patience is definitely a virtue for budding otter watchers as Lutra lutra can only hold their breath underwater for approximately 20 seconds and so have to re-surface at regular intervals.

Otters are generally solitary and only come together for mating and dog otters only stick around for a short time after the cubs are born, leaving the females to do most of the hard slog in bringing up the youngsters. The male's territory is much larger than the female's and he'll have at least two or three other females to mate with in his own home range. Gestation normally lasts around nine weeks after which two or three cubs are born in a specially designed holt (otter den dug into riverbank, usually with dense tree roots and scrub cover), although the female will usually have a few other holts in her territory just in case she has to move them if there is a threat. The cubs are born weighing a mere 40g, eyes closed, and with a pale grey-coloured coat. At five weeks old their eyes open and weaning is then a gradual process from seven to 14 weeks by which time they are fully weaned and brave enough to venture further outside.

Surprisingly, swimming does not come naturally to the cubs. An observer might reach the conclusion that they have a fear of the water as they can be heard squealing and peeping in indignation when mum drags them by the scruff into the water. These soft balls of fluff are extremely buoyant and find it very difficult to dive under the surface. Eventually they learn to catch their own prey and leave mum to find their own territories at around 15 months of age.

Otters are sexually mature at about 18-20 months and the male picks up the female's scent from her spraints (droppings left in prominent positions along the banks of rivers which are used to mark out territories). He will stay in close contact with her for about a week in order to ensure that no other marauding males can sneak in to mate with her, ensuring that his genes will be the only ones passed on to the next generation.

The Eurasian Otter's prey consists largely of fish, but it also supplements its diet with small mammals, amphibians and even young fledgling birds. It is an opportunist feeder and will feed on what it can catch. The available prey species depends largely on the particular habitat. For example, the coastal otters tend to feed on butterfish, shellfish, young wading birds and the like, whereas the river/freshwater otters will take prey such as trout, salmon (hence they are certainly not an angler's favourite animal), eels - a great otter favourite - and also frogs, voles, etc.

There are two distinct types of territory - coastal and riverine. In fact the Eurasian Otter (Lutra lutra) used to be classified as two separate sub-species. This was mainly due to the fact that coastal otters tend to be diurnal (active during daylight hours) in their habits, alternatively the riverine otter is nocturnal (active at night). It would actually be more accurate to state that the riverine otter is particularly active at dusk and dawn. An adult dog otter has a home range of between 20-30km on river systems, and 3-4km on the coast. Bitches usually have much smaller territories in both habitats. Coastal otters must have a territory which includes a freshwater source in order to thoroughly clean the salt from their fur as salt causes water-logging of the pelt and can lead to hypothermia.

The Eurasian Otter used to be widespread across Northern and Western Europe and East into Northern Asia. However, during the late 1800s and early to mid 1900s the populations were decimated by hunting and the use of organophosphates in agriculture. Currently their strongholds are in the Highlands and Islands of Scotland, Scandinavia, and the Baltics. They are also to be found elsewhere on mainland Europe - France, Spain, Greece and Turkey. Although listed as 'threatened', due to the protection afforded the species and their holts under the Wildlife and Countryside Act (1981) which states that it is an offence to cause damage to or disturb otters and/or their homes, there appears to be a gradual increase in otter populations. The great news is that they are starting to re-colonise their previous haunts!

Due to the expansion of road building in the UK causing widespread damage to previously undisturbed habitat and vehicle numbers increasing year on year, one of the major threats to otters is road-kill. Mortality rates are high with many orphaned cubs; their mothers are killed while trying to cross roads in order to get from one river system to the next. Thankfully, organisations like The International Otter Survival Fund care for and rehabilitate injured and orphaned otters for release back into the wild. They have also brought in measures to help reduce road-kill.

The use of pesticides and other agricultural and construction chemicals leaching into freshwater systems can cause otters and many other species to become so ill that they can no longer hunt to survive and they end up dying a horrible death. Coastal otters and other marine mammals and birds are still very much at great risk from possible oil spills.

What You Can Do to Help

If you too love these adorable, intelligent and inquisitive creatures and wish to become an otternut and do what you can to help, you can: