Moorhens Content from the guide to life, the universe and everything 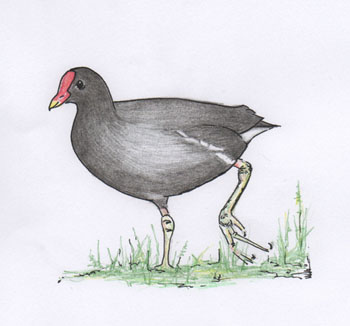 Moorhens are small, black water birds. They are found in many parts of the world - in fact just about everywhere except polar regions, tropical rainforests and extremely dry areas.

On first look, moorhens are simply small black waterfowl with red beaks. Closer inspection shows that there is a little bit more to them than that.

Moorhens are easily confused with coots, a closely related species, but whereas moorhens have red beaks and frontal plates, coots have white ones.

Despite being waterfowl, moorhens are not particularly good swimmers. They float well, but they can't make much progress on the water because their feet have no webbing. Where moorhens come into their own is among the reeds and on the bank of the river. Their enormous feet can be used to grab onto the reeds, or to walk on top of just about anything on the surface of the river, such as floating logs, water lilies and so on. They can also evade predators when on the water by diving and holding onto vegetation on the bottom with their feet until the danger has passed.

Moorhens spend as much time on the bank as they do in the water, and webbed feet would only hinder them in this location. They forage on the bank and among the reeds for water weeds, seeds, fruit, grasses, insects, worms and larvae. They can also climb up into trees, and have been found up to five metres up.

Moorhens are normally quiet, but occasionally will issue a loud squawking 'krrrraa' call which sounds like a child's party hooter. This sound is used as an alarm call and also to warn off other moorhens from their territories.

The English name 'moorhen' is slightly puzzling on first encounter. The entry for 'moorhen' in the Oxford English Dictionary says that it comes from the combination of 'moor' and 'hen'. But moorhens do not live on moors. Delving deeper, it turns out that the word 'moor' itself, while now referring to a dry, bare upland, originally meant a marshy area, and is related to the word 'marsh' (in Old English spelt 'mersc' and pronounced 'mersh'). So these are really marsh hens, which makes sense.

The word 'hen' is normally used for a female bird, while 'cock' is used for a male bird; for example, peacocks and peahens. But a moorhen may be male or female, being a cock moorhen or a hen moorhen respectively1.

The moorhen's most interesting feature (unless you're another moorhen) is the male's method of fighting. For casual fights, the stronger bird will chase the other, pecking at it. But for really serious fights, the two males will face each other. They will then lean backwards in the water with their wings behind them, making a sort of tripod of the two wings and their tail. This leaves their enormous feet free. They then kick the other bird repeatedly with their feet. This kick-boxing is unusual, particularly for a water bird.

Moorhens make nests on or near water - they may be on floating clumps of vegetation, in reed beds or even high in trees. In spring or summer, the female lays a clutch of eggs between five and 11 in number. Baby moorhens are black all over. They are easily confused with baby coots, which are also black but have red faces. Even as babies, moorhens are skilled at running across debris on the surface of the water rather than swimming in it. As they grow bigger, they remain black all over. Only when they turn to adults do they develop the red beak and the brightly coloured legs. In a good year, a pair of moorhens may raise two or even three broods of chicks.

1There is such a thing as a moorcock - a male red grouse, which does live on the moors. A female red grouse may be called a moorhen.