Children's Treehouses Content from the guide to life, the universe and everything 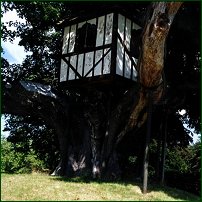 Treehouses (or tree forts) are every little kid's dream as they speak of adventures, of boldly going where no parent dares to go, and of climbing trees with a purpose. Fictional characters like Peter Pan, Tarzan, the Ewoks, Bart Simpson, Calvin & Hobbes - they all had treehouses, and for every generation there is a treehouse to aspire to. For those wishing to design and build a treehouse of their own, you don't really need a million dollars as quoted1. All you need is to find a suitably large, old and gnarly tree to occupy (ash, oak or elm trees are favourable), and a little ingenuity. After selecting your tree(s), there are generally two avenues of construction you can go down:

Both types of treehouse are also havens for childhood friends; places where parents or adults are only allowed if they come offering gifts of cakes or lemonade; somewhere you can conspire against the weird neighbours, gossip about the new boy at school, or just simply keep things secret.

For the most part, children's treehouses are made from bits and pieces either lying around in the back garden, junk yards or 'found' in other places. Some building materials may have to be purchased, and this is usually done by doing odd jobs for the old lady next door to get the money needed to buy the more costly elements. Or selling old stuff, especially parents' or siblings' belongings back to them at a considerable mark-up. This can often lead to debates among family members concerning Socialism, Capitalism and Theft, with the end result usually being Getting Away With It.

The bulk of any treehouse will be made out of wood though. It is a building material that can be light and sturdy but also reasonably easy to find and shape, especially if you choose to build your treehouse in a forest; where you find trees, you find wood. Of course you could try scrounging around a furniture factory for offcuts (or better), however don't expect the staff to take too kindly to you running off with raw materials or lovingly crafted Chippendale reproductions to help construct your fortress. Planks, pallets and boards are ideal for walls, floors and roofs. Nails, nuts, bolts, screws, rope, string and a wide assortment of other materials will also help in putting the thing together (and keeping it together).

Den Treehouses are also the perfect chance for the imagination of the architects to run wild. Trapdoors, rope ladders, exit poles like those found at a fire station, hidden ladders, a range of exciting defensive weapons and fortifications, and of course the obligatory NO GIRLS ALOUD2 sign to alert members of the public about the type of goings on in the treehouse by the would-be cowboys/spies/soldiers/superheroes hidden away inside.

Painting a treehouse is usually frowned upon, but some fortresses have been known to receive an exterior camouflage print design of greens and browns. If a proper roof has been attached, painting that red will give the treehouse a more homely look, which some designers prefer. Internal paintwork may extend to favourite colours, but mostly the walls will be decked out with appropriate graffiti or artwork. In older boys' treehouses this will include line drawings of naked women, while girls will mostly opt for something either 1960s or 1970s in approach (such as psychedelic swirls and flowers), or the stereotypical shades of pink.

When it comes to decor, a scabby damp carpet is the most a Den Treehouse can have before it starts bordering on a Palace Treehouse. However, a nice rug can be acceptable if there are some appropriately 'cool' posters stuck on the walls (these can be found in magazines that litter the waiting areas of most barber's shops the world over), or a set of windchimes or a dreamcatcher (for the feminine touch). Wooden or cardboard boxes, a mattress or some old cushions and maybe a chair to sit on are okay. For lighting, battery-powered torches are the most efficient tools for those nocturnal visits to the treehouse to tell ghost stories, plan your next attack on your enemies, or look at dirty magazines. All these less than prestigious furnishings ensure the 'down-to-earth' reputation of the builders is not tarnished by any possible 'snobby' additions, which might infer the Den is more like a Palace.

Palace Treehouses are of a superior quality and design (and inferior in excitement). For this reason they are more commonly found in affluent areas and may require planning permission as they are, for argument's sake, either an extension to the family home or a building in their own right. The Palace is perhaps something that an adult will have constructed to either bring back memories of what their dream treehouse should have been like in their youth, or on the whim of their own child. Thus, Palace Treehouses naturally come with ash-veneered panels, sandalwood decking, metal beams, a wide range of traditional wooden frame construction techniques, and a gruff builder to put it all together without you lifting a finger. Aah, lovely. Just right for the Little Prince/Princess who has it all.

If you need any ideas on making your own treehouse, or would prefer someone else to do all the hard work for you because you bruise easily and have wads of cash to waste, why not visit a few treehouse related websites? A few of the better ones follow:

One word of warning though - fire. No matter how much you think it's a good idea to have an open fire or loads of candles burning away in your treehouse, don't do it. Your house is in a tree. It is made of wood. Wood burns.

1By the Bare Naked Ladies above, not a quote by a real-life builder. You're more than likely getting conned if you are charged US $1million for the erection of a treehouse. Or you're some eccentric ageing pop star who doesn't care about cash and what the 'little' people think.2Spelling error intended, as is the pun.