Nuts, Bolts and Screws Content from the guide to life, the universe and everything 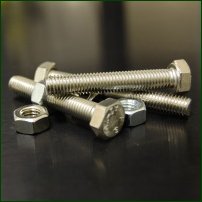 Almost everything around us in our everyday lives at home, at work or in public buildings, is constructed from many different parts all put together. From the days of hand-made furniture to the modern-day trend for flat-pack DIY1 furnishings, there have always been many different ways of fastening one thing to another.

The most common method is to use nuts, bolts and screws. Nuts and bolts are usually used at the same time: the bolt is inserted through a hole drilled in each item to be fastened together, then the nut is threaded onto the bolt from the other side and tightened, to give a strong connection. This method of fastening is so common that the phrase 'Getting down to the nuts and bolts' has come to refer to the basis of any process or idea.

Screws do not use nuts. Instead, the thread2 grips onto the material to be fastened together as the screw is driven in.

In its simplest form, a nut is a small piece of metal with the outside shaped for easy gripping and a spiral-cut groove (the thread) running around a hole through its centre. There are several types of nuts in use today:

Hex nuts have six sides and can be held or turned with a standard spanner3 or socket wrench. Their thickness is usually equal to the outside dimension of the threads. Common practice is to allow the bolts to extend half the thickness past the end of the nut.

Coupler nuts are similar to hex nuts except that they are thicker, and as the name implies, they are used to connect two different bolts together.

Cap nuts, also known as 'acorn nuts', are also similar to hex nuts, but they have a solid top to cover the exposed threads of the bolt. These are most commonly used in exposed areas both to improve the finished appearance and to prevent people from being cut by the exposed threads.

Wing nuts are designed to be tightened without tools and have two large, flat projections or 'wings' which can be turned by holding them between thumb and forefinger. If necessary, they can be further tightened or loosened with a simple pair of pliers. Wing nuts are most commonly used where frequent disassembly is required.

Turnbuckle nuts: Similar to coupler nuts, turnbuckles have one side threaded in the opposite direction at each end, allowing the overall length to be adjusted.

Lock nuts are designed to be particularly hard to remove. They have a small imperfection in their threads, or an area of material such as nylon that will cause the threads to bind. Lock nuts are often used in parts that may be subjected to vibration or rotation. This effect can also be accomplished by tightening a second nut (called a jam nut) over the first.

Bolts are the most important part of a threaded connection. They have a round stem, known as the body, with threads cut into one end and a head for gripping at the other. Some bolts are threaded along their full length, while others have only a short threaded area at the end. Unlike nuts, bolts come in different lengths and are selected by the thickness of the material between the nut and head of the bolt.

Screws are used when the parts to be fastened together have threaded holes in them. Alternatively, some kinds of screws are 'self-tapping', which means that they cut their own threads as they are screwed in.

Hex bolts: like hex nuts, hex bolts have a six-sided head that can be held or turned by a standard spanner.

Cap screws have a round head with a shape cut into it to accept a screwdriver or allen wrench4. They often have ridges around the outside for easy gripping.

Square-head bolts have only four sides on their head.

Round-head bolts have a dome-shaped head with a slot or shape cut into the head for gripping. They give a more finished appearance to the final assembly.

Flat-head bolts, as the name implies, have a flat top and angled bottom of the head allowing the bolt head to be flush with the surface of the part. They require a special angled hole made with a special type of drill called a countersink.

Wood screws may have any of the types of head already listed, but they are designed to cut their own threads as they are turned into the hole. They come to a sharp point and can sometimes be used without any pre-drilled hole at all, although it is better to drill a small 'pilot' hole to prevent the wood from splitting. Wood screws can also be used in some plastics and other soft material.

Lag bolts or screws have a six-sided head and are threaded like a wood screw. The terms 'bolt' or 'screw' seem to be used interchangeably, even though a lag bolt is never used with a nut as such.

Anchor bolts are used in special circumstances such as with concrete, brick or hollow walls, where one part cannot be threaded and there is no access to the other side. Anchor bolts generally have ends that expand to grip the sides of the hole.

Expansion shields: Made of plastic or lead, these anchors are commonly used by homeowners to hang pictures and curtain rods on hollow walls. When a wood screw is driven into the expansion shield the ends turn out, applying a bearing surface inside the hollow wall.

Lead shields: Slightly different from expansion shields, these anchors are most commonly used in brick or soft concrete. These may use a lag bolt or machine screw and when tightened the end expands against the sides of the hole.

Toggle bolts are also used on hollow walls and have a pair of spring-loaded wings that fold back to allow them to be inserted into a hole in the wall. These then expand, pressing against the inside surface of the wall as the screw is tightened. As toggle bolts use fairly long screws it is important to make sure that the wall cavity is large enough to allow the bolt to fully tighten.

Sleeve anchors: Used in concrete, sleeve anchors have a small wedge at the end with a split shield that presses against the sides of the hole.

Wedge anchors: Also used in concrete, these fasteners have a small key at the end which presses against the side of the hole when the nut is tightened.

It is important that the threads cut into the bolt match the threads cut into the nut or part to be connected. Before the Industrial Revolution, each mechanic would cut his own threads into each part. There were no standards of size or shape. As industry developed in the 19th Century, each industrialised area developed its own standard. In Great Britain, the Whitworth thread standard (with the fastener size based on the size of the head of the bolt) became accepted. In the US, a different standard was developed, based on the size of the body of the bolt. In mainland Europe, a third system was developed based on the body size of the bolt using metric measurement.

The full impact of this independence was not realised until the Second World War, when a mechanic with Whitworth tools faced an American bolt that needed to fit into a European threaded hole. As a compromise, the 'Unified Thread Series' was developed. Based primarily on the US system, the number of threads per inch, the outside and inside measurements of the grooves and the angle of the cuts were all standardised. Today, almost all the world uses metric threads, except the US, which still uses the Unified Thread Series for the vast majority of its work.

Special styles of threads are required for specialised uses. Jacks (used for lifting heavy loads such as cars) and vices that are used for clamping parts use ACME threads that have a large flat area at the top and bottom of each groove, allowing much more pressure to be applied.

Washers are flat metal discs that are usually placed between the nut or bolt-head that is to be turned and the part to be fastened. They allow the nut and bolt to be turned without affecting the finish of the part, and allow a smooth bearing surface that will give a more accurate torque reading (see below). Some washers have a series of small teeth around the edges, or are split to prevent the bolt from loosening. These are called lock-washers. They are used in areas that might also use a lock-nut.

Torque is a measure of the force applied to something to produce rotation or twisting. It is the product of pounds/kilograms of force multiplied by the number of feet/metres that the force is applied along. This can be expressed by 'kilogram metres' or 'foot pounds'5. When turning a bolt or screw, as more force is exerted, the metal is stretched. If the bolt or screw is over-tightened it will break. Critical connections, such as automobile engines, have the torque requirements of important bolts listed in their repair manuals.

Nuts and bolts can be made from many types of metal. Carbon steel is the most common; however, to prevent corrosion (rust), this is often coated with zinc. Bolts used in corrosive atmospheres are often made from a special grade of steel known as stainless steel, which has a high nickel or chrome content. Bolts, nuts and screws are also available in other materials such as high-strength steel, brass, aluminium and even plastic. It is important to consider strength and environment when selecting your fastener. It is also worth noting that many metals can react to each other causing galvanic corrosion6 if mixed in a hostile environment.

1Do It Yourself2A spiral groove cut into the surface of a nut, bolt or screw.3In the US this is called a wrench.4A six-sided bar of steel shaped like the letter 'L' or sometimes 'S', also called an allen key.5For example, if you had a lever three feet long and applied ten pounds of force, you would have used 30 foot pounds of torque.6A corrosive reaction involving electric currents produced by chemical reactions.