The Gentle Art of Screwing Content from the guide to life, the universe and everything 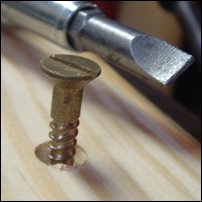 When faced with the prospect of screwing, there are many choices to be made. Circumstances will often dictate the correct action, and screwing in an emergency, without the correct tools to hand, can produce horrendous results. When faced with a simple task - an erection of a shelf, for example - the temptation is to get on with the job immediately, without pause for thought. This is rarely a wise move, even for the experienced screwer.

Planning is important and must be done in advance. A well thought through strategy is a goodly step towards the ideal screw. Plans can, of course, be laid in a bar or pub. The general view, however, would be that alcohol can impair performance and the company may prove distracting, necessitating endless postponements of the planned screwing. The novice screwer should beware of tall tales of screwing successes from others supposedly more experienced. Alcohol tends to distort and exaggerate.

Here we are concerned with perfection, the ideal situation. A beautiful firm substrate awaits, and a free choice of equipment is available to the screwer.

At one time, all screws were straight slotted. The head has a slot into which the screwdriver blade is inserted and, with a simple turning action, the screwing begins. The simple slot is fine in normal screwing, but there is a danger that the blade will slip out of the slot if the screwing action is careless or done with excessive force. Then came Philip, and screws were never the same again. Actually, this is a joke. There was no such person as Philip (his name was Henry).

The original type of crosshead screw was introduced by Henry F Phillips. His goal was to make a screw and screwdriver fitted for the automated industry. Instead of a single slot, there were two, at right-angles, forming a cross on the screw head. Furthermore, the slots did not extend to the edge of the head, limiting the slipping possibilities. The screwdriver will almost automatically fit in the head - it only takes a quarter of a revolution for the perfect fit. Also, these crosshead screws have more dispersed forces that allow the screws to be tightened faster. Successors of the Phillips screws are Allen or inbus, an inside-out bold shape with six sides. Many varieties of these also occur, ranging from three to ten sides. Screwdriver heads take the form of a tiny chainwheel, again with many sides.

It might be suggested that the ever-increasing complication of such a simple device as a screw would have the effect of limiting production to those companies with sufficient capital available to keep up with design changes. Others may see it as a method of retaining production at the company of invention. Others see it as an example of mankind's continual striving for perfection. Since Phillips' innovatory approach there have been countless variations on the theme, and the Phillips screw is now most often found in engineering applications, with the subtle improvement that is the Posidrive screw now ubiquitous in home improvement stores. Ever more sophisticated screws have become available, including the notorious security screws which are deceptively simple to screw in, and impossible to extract. This can lead to an embarrassing and difficult situation if your screw has been inserted in the wrong location. Other types of screw include the 'Torx', with a star indentation, and the 'Robertson', with a square head, a Canadian invention and the best, most slip-resistant screw design ever. These require special tools, without which such exotic species are best left 'in your dreams'!

It is vital to ensure that the size of the screwdriver tip matches exactly the size of the slot in the screw. In the case of the crosshead screw, this is made easy by a numbering system; there are four basic sizes, numbered, simply, from one to four. If you have a No.1 screw, you need a No.1 screwdriver and so forth. In the case of the straight slot, make sure that the tip of the screwdriver fits snugly into the slot before you start. Incorrect size matching of screw and screwdriver is the cause of more screwing 'cock-ups' than any other factor.

A close and careful examination of the material into which the screw is to be fastened will pay dividends. Your approach must always be guided by the condition of the substrate and if it is, in any way, unable to support the screw, be warned, do not screw there! Find another place in which to insert your screw.

It may, among many possibilities, and with infinite variation, be wood, brick, plaster (gypsum), metal or a thin board of some kind. Each requires a different type of screw.

Wood is the simplest structure to screw into and, unless you are incredibly modern and up to date, you need a woodscrew. Indeed, the novice screwer may well benefit from practice using two short planks.

A successful screw into brick is quite an achievement, and by far the most satisfying. It is just about possible to screw into brick unaided, using some very expensive hi-tech screws. The usual approach, however, is to soften the hardness of the brick by the insertion of a plug, usually made of plastic. This then enables the use of conventional woodscrews, as the hardness of plastic is similar to wood.

Plaster (gypsum) is the most difficult substance in which to screw. If it is old, it is soft, friable1 and liable to crumble under the strain of inserting a screw. Screwing is not recommended in plaster but, if there is no alternative, then select an expanding plug (a plug that will increase in girth as the screw is inserted thus gripping the sides of the hole). Also take very great care to select a long screw that has a very wide thread, and treat the whole operation with the greatest care and finesse.

When screwing into metal, you need a self-tapping screw. This is a screw of a very hard material that will cut into the metal as you screw.

The once problematic field of fixing a screw to a board has been made much easier in recent years by a wide variety of fixing plugs. A plug is very necessary, as without it a screw would have little chance to grip the insubstantial substrate. In particular, there is a type of plug that is in itself something like a screw, insofar as it has a very wide thread on the outside. It is made of a very soft metal or plastic and has a hole in the middle into which any normal screw, preferably with a very close thread, may be inserted.

As has been explained, it is foolish and naive to jump straight into screwing without prior preparation. The result will be a very fragile screw with dissatisfaction all round, both for the screwed substrate, and the screwer, who will be left with a sense of frustration and lack of achievement.

A hole must be dutifully and diligently prepared. This is made with a drill. Drills may be either manual or electric. Although the hand types have their adherents, and advantages in awkward situations, nowadays most screwers are equally at home handling the electric type. The technique, and selection of bit (most often called a drill, just to confuse the uninitiated) varies with the substrate.

This is simple. Select a drill bit that is the same diameter as the neck of the screw, and drill a hole two or three millimetres less deep than the depth you need the screw to be inserted. If the hole is to be large, it may be advisable to pre-drill a smaller hole first, in order to guide the larger bit. If the screwhead is to fit flush on the surface, a countersink will be needed to make a wider shallow indentation on the surface.

When you are using a plug, the selection of drill bit, plug and screw needs to be done as a co-ordinated exercise. Often the plug manufacturers will provide a guide - 'With this size plug, use that size drill bit and such a size screw'. If this is not available, the drill bit, which must be of the 'masonry type' with a specially hardened tip, should be the same size as the outside diameter of the plug (excluding any gripping indentations/extrusions) and the hole drilled a millimetre or two deeper than the length of the plug. The screw should be of a size such that the thread will grip firmly into the plastic of the plug without being so thick as to cause distortion of the plug as the screw is inserted. The idea is that the screw thread will firmly grip the plug, while at the same time causing a thickening of the girth of the plug so that it is firmly gripped in the hole.

This is as simple as wood. Take care to pre-drill a 'pilot hole' first, and to use special drill bits (HSS High Speed Steel). For very wide holes in hard metal, it may be necessary to go through several stages of intermediate sizes to achieve the required diameter.

The size of the hole is governed by the outer diameter of the plug. Drill completely through the board. use a masonry drill bit, and drill as slowly and carefully as possible. If using the newer type of plug described above, there is no necessity to drill more than a pilot hole. The plug is then gently tapped into position before being screwed home.

Care should be taken to drill at right angles to the surface with as little 'pushing' force as necessary. Let the drill do the work, and concentrate on keeping the angle correct. The trueness of the hole will govern the perfection of the final result. Wear goggles while drilling, and examine and blow at the hole once drilled for a professional flourish. A little rub with the palm also makes it look as if you know what you are doing.

With all the preparation out of the way, the hole nicely prepared, the plug inserted if necessary, hands safely, but optionally, gloved in soft leather and tools in hand, you are ready to start screwing. Place the tip of the screw in the hole, and snugly fit your selected screwdriver into the slot(s) of the screw. Now, with only a gentle pushing, turn the screwdriver clockwise. Once the thread of the screw has a grip on the inside of the hole, it is plain sailing. Continue the twisting action, with minimal pushing force, until the screw is sunk as far as required.

Should the screwing prove difficult, a little lubrication can assist matters. Simply remove the screw, lubricate with a little oil of your choice, and try again. Continuing difficulty may mean that you are screwing into the wrong hole. Check. Otherwise you may have to repeat the drilling, using a slightly larger bit.

Sadly, though perhaps inevitably, the art of successful screwing has become more and more mechanical. The advent of the electrical screwdriver has introduced rapid screwing techniques that, while undoubtedly effective, do not allow the empathy between screwer and screwed, between the craftsman and his handiwork, that is only available through skill, practice and a great deal of care.

Do not simply leave the scene as soon as screwing is complete. Be sure to tidy up afterwards, with a soft brush or vacuum cleaner. And always remember, however much screwing you have to do, the devil is in the detail. Preparation and care will be repaid a hundredfold.