The Common Ash Tree Content from the guide to life, the universe and everything 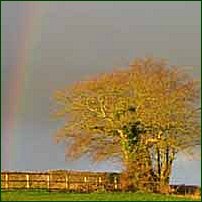 The common ash tree of Britain and Ireland is the species Fraxinus excelsior, whose range actually covers most of Europe. There are many related species of Fraxinus found in other parts of the world, while the Rowan, or Mountain Ash, is a smaller tree from a different family.

The ash tree can grow to a height of 30m, with a spread of 20m. It is deciduous, with leaves which are divided into 9-13 leaflets whose proper botanical shape is termed pinnate. These leaves give the tree a feathery outline in summer, and a yellow colour in autumn.

The bark on the trunk is a greyish brown, with deep cracks, but the bark on the younger twigs is a smooth, pale, greenish-grey, which gives a strong contrast in winter to the matt black buds. The distinctive black colour of the buds makes the ash very easy to identify in winter. The buds are often the last to open in the British spring.

The seeds, or keys, stay on the trees through the winter, and only fall in spring. They can be carried long distances by the wind, and germinate quickly in almost any type of soil. In European conditions the ash is normally a fast-growing tree, and will start flowering when around 30 years old, when it will probably have reached a height of 15 to 20m. Growth in height will usually stop when the tree is around 100 years old. Very few ash trees live beyond the age of 250.

The Habitat of the Ash Tree

Ash trees grow best on fairly damp soils, as long as the conditions are not too acidic. Since they need plenty of light, they can easily be crowded out by other overshadowing trees. The limestone areas where they flourish also suit beech trees, so that long-lasting ash woodland is usually found only in areas outside the range of the beech. In Britain, ash woodland can be found on the steep limestone slopes of the Peak District, in Somerset, in South Wales, and in southwestern Scotland. In Ireland, where the beech tree is not a native, the old forests in limestone areas were once a mixed woodland of ash and elm. Most of these forests were cleared long ago, but the ash is still the most common large tree in Irish lowland hedges.

Ash trees do not support a wide range of invertebrates2. This means in turn that ash woodlands do not have as rich a collection of birds as most other broadleaved forests, though chaffinches, wrens, blackbirds and robins can usually be found.

Ornamental Varieties of the Common Ash

If given the room to grow and spread, the common ash forms a very striking specimen tree, though the lack of undergrowth makes it unpopular among many gardeners. There are also a number of cultivated varieties, which may be found in large gardens and country parkland. These include Fraxinus excelsior 'Jaspidea' which has yellow leaves in spring, and a golden colour in autumn, and the smaller weeping ash, Fraxinus excelsior 'Pendula'.

The Uses of Ash Wood

Ash wood has two main practical uses. It is excellent firewood, and burns well even before being dried. In many areas, ash trees were traditionally coppiced for firewood. This meant that the branches were regularly chopped back so that the plant took the form of a bush rather than a tall tree.

The other main use of ash wood is when both strength and a little flexibility are needed. In sports, ash is commonly used for hockey sticks, oars, snooker cues and for the hurleys used in the Irish sport of hurling. 'The clash of the ash' is a familiar phrase to Irish sports journalists trying to convey the excitement of a hurling match. Ash wood is also popular for tool handles. Its shock-absorbing quality makes it useful for the chassis frames of the classic Morgan motor cars. It was also widely used for making longbows.

The ash was quite an important tree in many older European traditions. Its English name is said to come from the Anglo-Saxon word aesc, meaning spear. In Norse mythology, the World Tree Yggdrasil was an ash tree. In the Celtic Ogham Alphabet ash or 'Nion' represented our modern letter N. In English folk wisdom, it was thought that the opening of the buds could predict the weather: if oak buds were seen to open first, the summer would be dry, while if the ash buds opened first, the weather would be wet. This can be remembered by the little rhyme:

1Technically these are actually fruits, but this causes confusion to those who assume that fruits are edible.2These are the legless worms, slugs and snails, and many-legged insects and spiders that are less technically known as 'creepy-crawlies'.