Field Hockey Content from the guide to life, the universe and everything 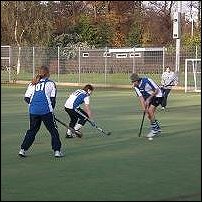 When looking for a way to spend your Saturday afternoons, most people would not immediately think of playing field hockey. Many schools do teach this sport but, more often than not, as a consequence some people have a deep loathing of the game. Nevertheless, many people enjoy playing field hockey as a recreational activity.

How the Game Works

Closely related to Ice Hockey, this game involves two teams facing each other and attempting to get a small solid plastic ball into one of the goals situated at either end of a 100 metre pitch. They must achieve this aim using a stick made from wood. In recent years, this wood has been reinforced with plastic, carbon fibre, fibre glass, and all manner of other hard things to allow you to hit the ball harder.

The only way to score is to get the ball into an area that extends 16 metres from the goal and shoot from within it. A goal scored from outside this 16 metre area will not count and the game restarts with the same score and the other team in possession. The game lasts 70 minutes with a break halfway through, during which the teams swap ends so that in the second half of the match they must score in the end they were defending in the first half. The team with the highest score at the end of the 70 minutes is the winner.

The game consists of 22 players organised into even teams of 11. Ten of these players will play out on field and one player will consent to spending three hours trying to put on a heavily padded kit. This latter player is then placed in front of the goal and is charged with stopping the little ball getting into the goal. This player can use any part of his/her body to stop the ball, and due to the high level of padding will often attack anything that moves in the 16 metre area - that is, the ball, players, sticks and umpires. A good goalkeeper will not only be able to keep the ball out of the net, but will also seem able to injure upwards of 60% of the opposition and suffer no damage or warnings from the umpire in the process.

Other players have very little padding; a mouthguard and shinguards are both optional. The ten players out on the field will organise themselves into set positions to make best use of their strengths. The quick people generally play near the opposition goal; those with a lot of stamina for running up and down the pitch will play in the middle; and those who can get away with hitting people with their sticks and tackling, will play in defence. The precise formation of players will depend on the quality of the opposition and the number of players available for each position.

Where Field Hockey is Played

Field hockey is rarely played on fields anymore outside of school playing fields. Most of the major clubs and universities have artificial surfaces which can be played on in almost all weather. There are two main types, namely sand-based astroturf, and water-based astroturf. The sand-based artificial pitch seems to be specifically designed to do as much damage as possible to anyone who falls on it. Clothes are badly torn and any exposed skin is ripped to shreds. Any injury resulting from a fall on astroturf will typically take months to heal. This is because as soon as it is nearly fully healed, the player will fall again ripping open yet more flesh. It is not uncommon to see a whole team of hockey players with various scabs on their arms and legs from such falls. Sand-based pitches tend to be hard, giving little bounce for either the ball or legs. Many older hockey players, who have been playing on such surfaces for years, have knee problems, which eventually stops them from playing altogether. Water-based pitches are quicker surfaces and do less damage when you fall on them. They tend to be bouncier, which means less damage is done to players' knees and it's easier to do tricks with the ball.

The rules for this sport tend to be complicated. They are mainly concerned with maintaining a level of safety so that as few players as possible are injured. Thus there are rules about where you can tackle from; about when you are allowed to lift the ball off the ground; about obstructing people; running into people; and about where you can shoot from. There are other rules about what part of the stick you can use; about kicking the ball (you can't); and about attitude to other players, and, of course, the umpire. This is supposed to make the game safer and smoother. The umpires' decisions are final and arguments can result in the distribution of cards. These cards can result in serious fines from the club and disciplinary hearings at league level. As a result, the umpires are respected, if not always well regarded.

A Word of Warning...

And a final note for those who think that field hockey is just for wimps and girls; remember that the person you are insulting has three feet of reinforced wood at his/her disposal. Choosing to disagree with them is not always a good idea.