Doctor Who and the Terror of the Titles Content from the guide to life, the universe and everything 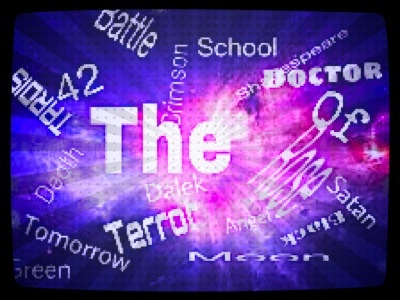 Doctor Who episodes were broadcast between 1963 and 1989, and the series has continued again since 2005. Each episode or serial1 was given a title, and the titles give a flavour of what the episodes or serials were about, so a consideration of the words used in the titles is informative and amusing in a way. We hope this Entry provides 'enlightenment' about the themes within the titles.

This Entry considers the titles used in the main series only, so the names given retrospectively to related groups of episodes in the first 2½ series have been omitted, serial titles have been used during the period when individual episodes were not given titles, and special episodes like Dimensions in Time and The Curse of the Fatal Death have not been considered. The analysis covers the old and new series up to Last Christmas, the final episode in 2014, so 361 titles have been analysed, containing a total of 1,100 words.

Designed to entice people to watch the programme, the titles of the episodes are often thrilling, such as The Brink of Disaster, The Seeds of Doom, Cold Blood. Some titles are influenced by films, particularly since 2005 (eg The Runaway Bride, The Shakespeare Code, Dinosaurs on a Spaceship2) and others are rather humorous (eg Small Prophet, Quick Return, Don't Shoot the Pianist, Let's Kill Hitler). And, in a nod to The Hitchhiker's Guide to the Galaxy, there is an episode simply entitled 42.

The number of words in the title varies from one (eg Kidnap, Crisis, Hide) to two (eg The Ordeal, Desperate Measures, The Moonbase) up to seven (The Doctor, the Widow and the Wardrobe, Journey to the Centre of the TARDIS).

As you probably know or will have guessed, 'the' is the most frequent word - it appears 250 times. Therefore 'the' makes up about 23% of the total number of words in the titles. That is because many of the titles do indeed have the form 'The Something of the Something' - 'of' is the second most popular word, with 122 appearances. By contrast 'a' only appears nine times.

As you might expect since the series uses a TARDIS (Time And Relative Dimensions In Space), 'Time' appears 13 times and 'Space' appears eight times in titles. 'Dimensions' appears just once.

On the theme of time, we also see 'Time-Flight', 'Timelash' and 'Tomorrow'. The word 'Day' features seven times, and 'Night' twice. Despite the Earth-bound stories, or perhaps because of them, 'Earth' appears only three times. There is also 'Earthshock'. Still keeping close to home are two appearances each of 'Sun', 'Moon' and 'Mars', plus 'Moonbase'. 'Planet' manages an impressive 17 and 'World' appears five times. A larger scale is suggested by 'Galaxy'.

The many dramatic words include 'Death', which is the fifth most frequent word, making 16 appearances, plus the related words 'Dead' (four appearances), 'Undead' and 'Deadly'. 'Evil' makes five appearances, and 'Fear' four. 'Terror' is included seven times. 'Curse' emerges three times, as do 'Destruction' and 'Nightmare'. There are two appearances each for 'Desperate', 'Danger', 'Impossible' and 'Horror', but fortunately there are three 'Escape's and a 'Rescue'.

Attention! In march the military with six appearances each for 'Invasion', 'Warrior(s)' and 'War', and three lots of 'Power'. Strategy is important here, as we see the titles include 'Plot', 'Operation', 'Conspiracy' and 'Stratagem', plus 'Hidden' 'Secrets', 'Dilemma' and 'Decision'. There's just one 'Army' and one 'Battlefield', but there is a 'Mission, a 'Patrol', an 'Ambush', an 'Attack' and a 'Battle' plus two 'Assassin's. All of which means two 'Kill's, a 'Bomb', a 'Boom' and two counts of 'Doom'.

The titles include various human features, including two mentions of 'Flesh' and three of 'Blood', two 'Mind's and a 'Brain'. There is a 'Breath', a 'Hand', 'Eyes' and a 'Blink'. As well as 'Face' there is 'Faceless'.

Not only bits of humans, but also whole humans appear, including a 'Man' and 'Father', a 'Wife' and 'Widow', two 'Girl's, a 'Child', a 'Daughter', 'Partners' and 'Family'. The series has seen just one 'Wedding' but two 'Bride's. Famous people include Shakespeare, Vincent (van Gogh), Hitler and Kublai Khan. Professions are well represented - there is an 'Astronaut', 'Ambassadors', a 'Knight', a 'Caretaker' and a 'Pianist' plus a 'Beggar', a 'Robber' and two 'Pirates', but also 'Holiday' and 'Leisure'.

Well-known places on Earth that are visited include Manhattan (twice), London, Pompeii, Venice and Rome. Off Earth, you can go to places like Peladon, Akhaten, Androzani and Frontios.

Aspects of the natural world features frequently in titles. 'Forest' appears three times, as does 'Sea'. 'Stone', 'Sky', 'Water' and 'Fire' appear twice but 'Air' just once. The weather is 'Cold' twice, so there are two 'Snowmen'. There is a 'Jungle', a 'Volcano' and two 'Caves'. 'Steel' is used three times, and 'Silver' twice, plus there is 'Golden'.

You may or may not be surprised to know that, even though the series as a whole is known as Doctor Who, the word 'Doctor' only appears 15 times in episode titles, and the full name 'Doctor Who' occurs only twice3. The TARDIS appears just once. Names of Assistants don't appear in titles until the 2005 series, with 'Rose', 'Jones' and 'Amy' being included.

Daleks beat the Doctor here, with 17 appearances in titles, and the word 'Enemy' itself is included three times. The Rani is named twice, as are the Sontarans, and the Cybermen show up four times. The Ice Warriors make an appearance, as do the Autons, Ood, Silurians and Sea Devils and Zygons. The Master and the Slitheen are not commemorated in any titles, though4.

Reflecting Doctor Who's sci-fi credentials, scientific and mathematical terms are used in the episode titles. We can count 'One', 'Two', 'Three' (which pleasingly appears three times), 'Four' and 'Five' (which appear twice each). Then we have to skip to 'Tenth' and 'Eleventh' before going to '42', 'Hundred' twice, and then to 'Infinity'. There is the geometric with 'Arc', 'Circle', two 'Centre's and an 'Edge'.

Biblical references and religious terms add drama to titles. There are two 'God's, two 'Temple's, and two 'Angels', plus 'Satan'. There is an 'Ark' and an 'Eden', plus 'Genesis', 'Tomb', 'Resurrection' and 'Revelation'. 'Lazarus' and a 'Monk' appear; there is a 'Saint', a 'Priest' and a 'Prophet'. We also see 'Heaven', 'Paradise' and the 'Underworld'5.

So we reach the end - 'End' makes five appearances and 'Final' two. 'Doomsday' happens twice, and so does 'Armageddon'. But fear not; there are two 'Return's and 'Christmas' occurs three times too - hooray!

1A group of episodes with a common storyline.2Going at least one better than Snakes on a Plane.3Or three times if you count the TV movie that was simply entitled 'Doctor Who'.4Although the Slitheen appear in the title of spin-off The Sarah Jane Adventures episode 'Revenge of the Slitheen'.5The episode Underworld inspired the name of television soap opera Coronation Street's lingerie factory.