Model Railways - The Complete Guide Content from the guide to life, the universe and everything 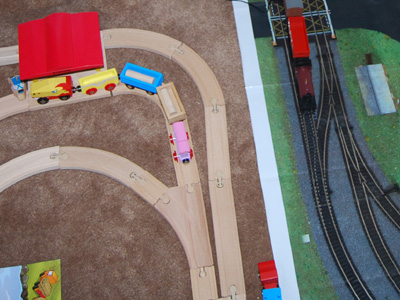 Building a model railway is one of the most common indoor hobbies enjoyed worldwide. This can be seen by the number of magazines on the subject on sale in every newsagent; for instance titles such as Model Rail, Railway Modeller, Model Railways Illustrated and so on are available in the UK today.

Model railways are sometimes used to bring back nostalgic memories of times gone by. For example, they can rekindle memories of a now-closed railway, by recreating them in miniature. Model railways create an ideal world that the builder can disappear into for some time, from a few minutes to many hours.

It is possible to assume that anything that contains a small train must be a model railway. Nothing could be further from the truth! So, what exactly is a model railway?

Train sets are toys, model railways are to-scale models. Train sets are generally primitive in comparison. A railway played with by a toddler is definitely a train set. The best way to think of a train set is to imagine a little train (which more often than not looks nothing like a real one), perhaps on a track, with a child pushing it round the living room floor making Whoo Whoo! and Chuff Chuff Chuff noises. Almost anyone you know will have owned a train set in childhood at some point.

This is not to disparage train sets, which are often more robust and easier to assemble than a model railway, and they provide good ways of 'indoctrinating' the next generation into a love of railways and, by extension, model railways.

A model railway is essentially a scaled-down version of a railway that is too small to transport a person1. They can be anything from exact scale models of, say, King's Cross Station, to models of an entire imaginary railway. On these, the owner runs, crashes, and gets mad with their very expensive train(s). This can either be done to a strict timetable or just involve moving trains at random.

Getting Into Model Railways 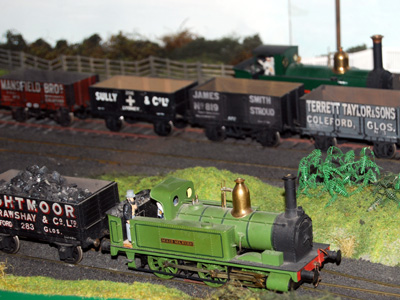 Of course, not everyone has room in their home or the money available to build their own model railway. If you fall into this category, it does not mean you cannot enjoy the model railway hobby. At the very least, you can still enjoy reading the magazines. Alternatively you can visit model railways that are open to the public. For instance, if you live on the Isle of Wight, you can visit the Fort Victoria Model Railway in the summer. Outdoor model railways, also called 'Garden Railways', are often found in model villages such as at Bekonscot.

Another way to get involved is to attend a Model Railway Exhibition; most large towns and cities in the UK host at least one a year. At exhibitions, model railway enthusiasts from all around the world display their tracks and layouts for members of the public to see, for a modest entry fee. Model railway exhibitions are also good places to get equipment, both new and second-hand, at bargain prices.

In addition to attending exhibitions, there are many railway clubs and societies that allow people to join. On joining, members may be able to help design and construct the group's model railway and, when completed, run group-owned locomotives or their own personal stock on the co-owned track.

Many serious model railway enthusiasts have a log book and a small box containing an engine and carriage that they seek to run, record and photograph on as many layouts as possible.

Having a One-Track Mind

Model railways can transform anyone into a single-minded one-track train fanatic. This can cause frenzies of strange, elusive crafts, practised only by modellers, such as 'super-detailing' and 'fixing'2. Every now and again the common railway modeller may throw a kit of a model train across the room after discovering one of the components is beyond repair, and only then realises that the component was merely upside down, while the wife/son/neighbourhood alien etc says that she/he/it thought it was meant to be a relaxing hobby. If you know someone who is acting strangely like that, before you report them to the authorities ask if they are a railway modeller.

And whisper it who may, but at the end of the day we are just playing trains, aren't we?

1A small-scale railway that can carry passengers is a miniature railway.2This is not to be confused with repairing, which often involves duct tape, something which most modellers loathe and detest.