Model Railway - Themes Content from the guide to life, the universe and everything 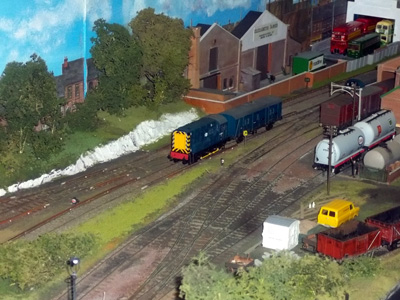 Every good model railway has a theme. This can be as simple as a certain time period that will be reflected by the style of buildings and running and rolling stock used, or as complex as recreating an actual section of a real railway in a given year with each structure representing a real-world counterpart.

The type of railway operations you intend to employ will also affect the theme. Will you have passenger service between two or more stations along the route, or concentrate on freight service dropping off and picking up wagons from various locations? Many model railways include both.

What is the Year?

Probably the most important decision to be made, after selecting which scale to use, is in what year, or at least decade, your railway will be operating. This will affect not only your running stock, but also the style of buildings and activities. Any time before the mid 20th Century most of your locomotives will be steam powered, but are they fuelled by wood, coal or oil? While a steam engine could be performing a ceremonial run in a modern setting, a diesel engine could not exist in the 19th Century. The other forms of transportation decorating the streets of your city or town are also affected – what are the style of automobiles available, or are there only horses and buggies?

This should not be a random decision based on what train set you happened to start with; a great deal of time and money will be spent on all future additions. However, there is no reason you can't run your diesel locomotive on an 1830s railway if you want, as long as nobody's looking.

Where in the World?

The type of running stock and style of the buildings will also be affected by location. There are minor differences between the US and British designs. Most other countries also have their own style. If you wish to model an exotic third world location it would be good to research what engines and era of carriages were in use during your years of operation. 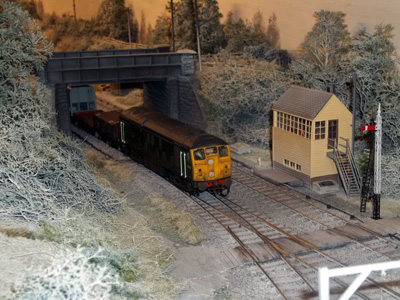 The time of year affects the scenery rather than the railway itself; a winter setting will usually involve snow, bare trees and people skiing or ice skating. Spring will have young flowers and baby animals. Summer will involve people swimming and sunbathing, for example. In the autumn the leaves will have turned colour and there may be piles of firewood stacked near some of the houses.

Some models get even more specific by including Christmas decorations, or items from other holidays.

Most layouts are not large enough to include a city, but a station and railway yard can be placed near the edge of the baseboard and a city skyline painted on a backdrop. A small town can easily be included, as can a rural area with a small depot.

Other locations are often included to give a purpose to the railway. A lumber camp and distant saw mill will require the train to carry the logs from one to the other. A mine can fill your ore wagons, or a farm could produce both milk and cattle.

What Type of Operation Are We Running?

Railway operations are basically divided into two areas – passenger and freight service. These are seldom combined in a single train as the passengers would be inconvenienced by the marshalling of wagons along the route. Only a very small railway in a rural setting would resort to this practice.

Passenger service can be further split into commuter and cross-country operations. Commuter trains can be run at ground level, on elevated tracks such as the service in Chicago, or underground in tubes, and some lines combine all three methods. Cross-country passenger trains travel between cities and sometimes the width of an entire continent, such as the famous 'Orient Express'.

Freight service usually involves picking up and dropping off freight wagons of various types at different locations on the layout. The wagons may then be assembled into a cross-country train in the marshalling yard.

Time is at the heart of a proper railway. Passenger trains are expected to arrive at each depot, allow sufficient time for the passengers to depart and board the carriages before departing, again at the exact moment the schedule demands. If a train begins to run late it could affect every stop on the run, because the trains may have a maximum speed they are allowed to use on particular sections of track. One of the marks of an old Engine Driver is his large pocket watch. If he in anywhere near a 'real world' route that he is familiar with, he pulls his watch from his pocket when the whistle sounds and comments how far ahead or behind schedule the train is running, even when he is on holiday. You may find you develop a similar affinity with your model over time.

While wagons filled with bulk cargo are not inconvenienced by waiting any length of time, the customers who are paying for their transport are. The full wagons must be removed from the siding and replaced with empty ones, so the suppliers' work can continue. At the other end a factory is waiting for raw material to keep their workers producing goods. The finished products must also be taken to market so the factory can receive its payment.

Another important consideration is that most of the cross-country lines have only a single track, with 'passing sidings' located at certain intervals. The 'give-way' train must be fully onto the siding before the points can be thrown and the other train allowed to pass. This has been the cause of major real world disasters in the past. Again, it is vital the passenger train maintains her schedule around these processes.

One of the greatest rewards of owning a model railway is showing it off to others with similar interests. You should consider printing calling cards with the name, scale and theme of your railway after you are satisfied with its appearance1. You should also offer contact information such as your name, telephone number and best time to call. Do not include an address unless you want people showing up at your door at the most inconvenient times. As you show off your line you should also know a few facts about the time period and history of it - the historical record if you have modelled an actual railway, or how you came up with the details if you have a fictional setting. You should also take advantage of any invitations to visit other railways.

In the golden age of the railways it was common for the railway's owner (and most millionaires) to have a private carriage fitted out for their personal use, not unlike the modern luxury motor-coaches used by travelling celebrities these days. One of the high points of modelling your railway is when you develop your own private carriage. If you visit another railway of the same scale you should bring your carriage and ask if it can be added to one of the trains for a run. Because some modellers use non-standard coupling devices it is also good to have one of your own engines available just in case. The honour is considered to go both ways; you have found their layout worthy of your presence, and they have found your carriage worthy of their railway. Be sure to take a picture and add the experience to your log book both when you visit another railway and when other modellers visit yours.

There are no rules set in stone; it is your railway after all. Some owners like to keep a few accessories that are clearly not appropriate to the time period of their railway and occasionally place one or two into the scenery just to see if anyone notices.

The transition from a train set to a model railway is magical metamorphosis. Although it is quite possible to simply run your train around the track, a little thought on the theme and operation of your railway can really enhance the experience.

1A true model railway is never complete, at least while the owner is alive.